The election is over and now it seems we will be “Moving forward, not back.” The republicans that have already come to accept Romney’s defeat are sounding a lot like Sookie Stackhouse:

Onwards we go to help the little guy, a process many feel can’t happen until we end trickle-down economics. It’s the trickle part that doesn’t sound good. Money should flow freely gosh darn it, not trickle! We couldn’t agree more. Here’s a broad diagram of the economy at work: 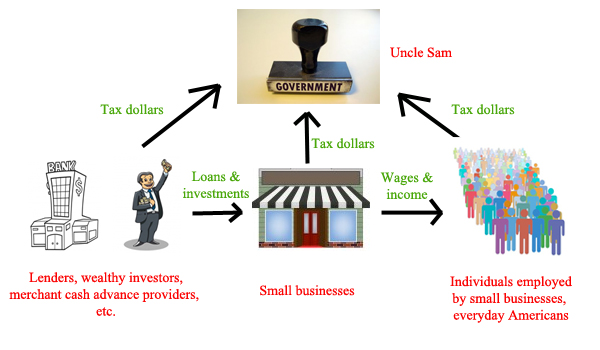 It’s popular to hate Wall Street, but Wall Street provides small businesses with financing to expand, who in turn employ more people in the process. Wall Street is not just banks and Merchant Cash Advance companies. It is any party that has enough money to invest in others while being able to absorb potential losses. A private investor is Wall Street. Wealthy friends or family members are Wall Street.

This Darn Trickle
One can dislike the economic chain since the flow of money between parties may not happen perfectly or because it allows Wall Street to get richer. There is nothing wrong with the rich getting richer, so long as the middle class and poor get richer too. If small businesses use the money invested by Wall Street wisely, they too will eventually become Wall Street. The amount of new jobs created as a result of a small business’s success means more wage earners will have a shot at becoming small businesses. In economics, a wide divide between rich and poor can be positive, for it creates a ladder that anyone can climb with no cap.

Empower the Little Guy
There is a competing theory and that is to believe that the economic chain starts with middle class wage earners. One could argue to significantly lower taxes on the middle class and the poor and impose much higher taxes on the rich. By doing so, consumers would have more money to spend at small businesses, prompting those small businesses to draw up plans to expand. That expansion capital still needs to come from somewhere and less of it will be there if Wall Street has been further taxed. Perhaps a small business could save money for a few years and use their savings to self-finance their own expansion. Under this theory, everyone becomes part of a very broad middle class. The extremes disappear.

Whoops
When the extremes disappear, there will be few investors with the capability to make large investments or investments that are particularly risky. A small business owner could save up for several years and open a 2nd location without an investment, but could he open 200 nationwide? Not without Wall Street. How many jobs will be created by the opening of 1 store? How many would be created by the opening of 200?

Now calculate how much new tax revenue is generated in each scenario, as well as the number of people that move up from being poor and unemployed to middle class and employed.

When the rich aren’t getting richer, the other classes can’t really move up either. Everyone stays in a broad middle class and innovation and advancements decline. The consumer or small business owner with a potential $100 million innovative idea won’t be able to raise the capital to see it through. How can they when the rich have been prevented from becoming really rich? What if they had a $10 billion idea?

One could argue as a single class society, that a $100 million idea or $10 billion idea could be financed by the government. This is true. It is also textbook state socialism. A one class society is also the premise of Marxism, where everyone is getting their needs met through cooperative work.

Marxism ignores the realities of a global economy. Ultimately, Americans need to obtain resources from other nations, and stay ahead technologically so as not to be conquered by outside forces. A classless society is a stale society, with no economic movement, social movement, or technological advancements.

How will the Merchant Cash Advance Market be Affected?
Merchant Cash Advance companies typically invest in businesses with less than 50 employees. Under Obamacare, any business with less than 50 employees does NOT HAVE to provide health insurance. This program may not affect the business as a whole, but the law mandates that all individuals purchase health insurance for themselves if they don’t have coverage already. Small business owners in the MCA market may be incrementally stressed by having to purchase health insurance. Their employees will be further stressed by having to buy it as well. As a result, wages may need to go up to help workers pay for their own insurance and less money will be available to grow and hire.

The total public debt outstanding has exceeded $16 trillion. That debt has to be paid for somehow and it is more likely than ever that Wall Street is going to have to pay up. This will not stimulate growth and as such, the economy is not likely to pick up any time soon.

Traditional lenders are going to remain quiet while the alternative lenders are going to power through it. A business could save up for three years and open a 2nd location or it could open it today with a Merchant Cash Advance. In three years, the location they want may no longer be available and that individual looking for a job will have run out of unemployment benefits long ago.

A Merchant Cash Advance helps small businesses expand today, hire today, generate more tax revenue for the government today, and helps everyone move up the economic ladder. Baby steps are better than none at all. What starts with a 2nd location may lead to a dream of owning 200 locations nationwide. They’ll need a bigger fish than MCA to get there. Let’s make sure we don’t tax those fish to death. 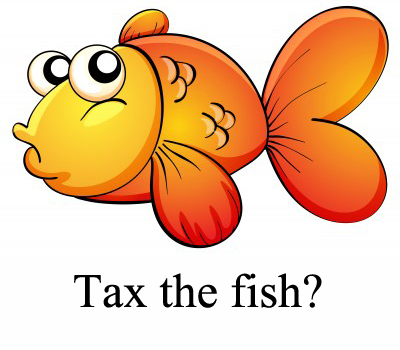 What do you think Michael?