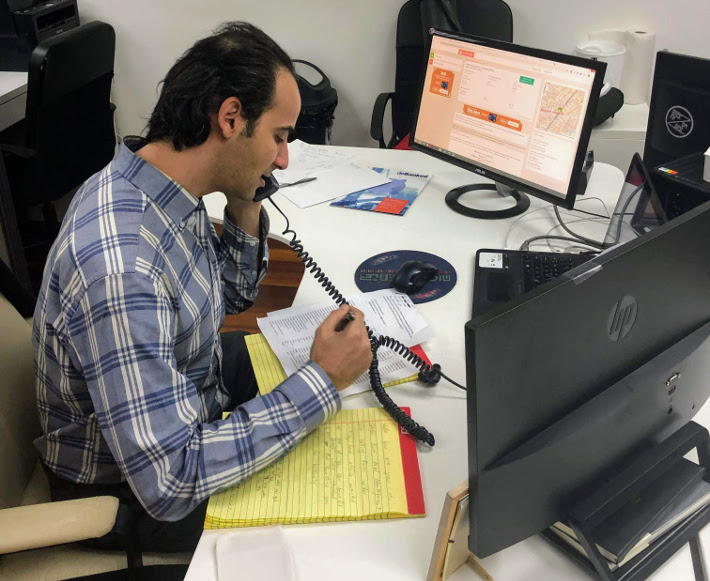 While visiting the office of Excel Capital in Manhattan on a reporting assignment, I saw a few open desks. They weren’t exactly empty, just available. There were phones, headsets, and computers all set up, just waiting for a salesperson to sit down and plug in. I pictured the salespeople I’ve previously profiled, smiling & dialing, as they say, contacting small businesses and delivering their best pitch. And for a moment, I imagined it was myself in one of those chairs. A funny thought perhaps if you’ve gotten to know me, but it’s not an uncommon curiosity for a reporter to try and channel a source’s mindset.

Excel CEO Chad Otar obviously caught that flashing glimmer in my eyes, because the next thing I knew he invited me to sit down and make a call myself, a completely cold one… to a merchant.

My instinct was to just observe, but the journalist in me unconsciously accepted the invitation. Before I knew what I was getting myself into, I was sitting at Chad’s desk in the CEO chair, reviewing sales scripts that were handed to me. I read two of them and realized that they were fairly different in tone. The first said something like “I’m calling from the back office and it appears that you once had an interest in funding. I’m checking to see if you still do.” The other one was far more direct. It explained a special offer to prospective clients and it finished with a question, “What are you seeking capital for?”

Above: A section of Excel Capital’s office. At left is the company’s CEO Chad Otar

Chad recommended the more direct route, the one I liked more as well. I didn’t like the idea of being in a “back office.” It sounds so distant, so non-urgent. And from my understanding, a sales call should sound urgent, without being too aggressive either. I knew I had to strike the right balance. I looked at the bolder script and practiced reading it a few times out loud. The script started with “Hello, my name is [John Doe.]” But I thought, “I think ‘hello’ is too formal. ‘Hi’ works better for me.” And I also thought that using just my first name might be more familiar and less intimidating than my full name. So I decided to just use my first name. Note that when introducing myself on the phone at deBanked, I always use my full name because I aim to be very intimidating. I’m totally kidding!

Back to my first EVER cold call. After rehearsing the script a few times and letting everyone around me know that this was my first cold call and a really big deal for me, I picked up the phone and I started to dial. “Hello, this is Kathy” a voice beamed from the other end of the phone. I said “Hi Kathy” and I started to read the script. Then I stopped. For a moment, it was just silent. She didn’t hang up! YES! She also didn’t curse at me or ask that I not call her back again. She didn’t even politely excuse herself. Instead, she asked a few clarifying questions.

“Where are you calling from?”

I could answer that! Except that I made a slight mistake. I called the company Excel Credit, instead of the correct Excel Capital. A subtle enough error, I thought, so I chose not to acknowledge it. And since I’ve been writing about companies like Excel Capital for a little while now, I felt comfortable enough to provide a brief sentence to this woman about what Excel Capital does. “We offer funding to small businesses throughout the US,” I said.  I thought this would be a good opportunity to correct my earlier error, so I slipped in “we’re also known as Excel Capital.” That could have sounded shady. But I don’t think she heard it that way.

“Wow,” I thought. “This is turning into a real conversation!” I didn’t know how her info had been obtained, so I just said  “I get lists from my boss and I don’t know exactly how this list was obtained.”

Chad said something to me about previous funding, so I then added: “We got this list of businesses that have previously been funded.”

At this point, I thought to myself “Why don’t you ask a question now?” So I went down to the next question on the script sheet and I asked in a “just happen to be curious” way: “Is there a certain amount that you need?”

Boom… Time to cut my tie and put me on the board folks. This deal is practically closed!

“That would be the owner who would know about that,” Kathy said.

Uh-oh. I wasn’t even on the phone with the owner. I wasn’t speaking to the decision maker. But for my first cold call ever, I felt pretty good about it. I gave Kathy Excel’s number and yes, my full name, and I feel like I helped warm up this potential client. They could call back and say that they (Me!) spoke with Kathy. My first cold call wasn’t so bad, and honestly, I’m kind of ready to make 200 more! Just kidding.