Surprise! We Are the Market


Merchant Cash Advance (MCA) is a small business loan. Look around. MCA players have spent so much energy on gaining mainstream acceptance, that we’ve become oblivious to reality. We ARE the small business lending market. There are alternatives out there such as credit cards and SBA loans, but they are industries of their own. Small businesses in 2013 really only have one place to obtain fast unsecured short term financing, and that’s here, the MCA industry. That assumes of course that you agree with our definition of MCA, which we stopped limiting to a purchase of future credit card sales some time ago.

Over the past few months, we began to realize that the only small business lenders making headlines are people we know. Is the country that small or does MCA dominate the market that much?

A glimpse at the sponsored advertisements on Bing in the NYC region: 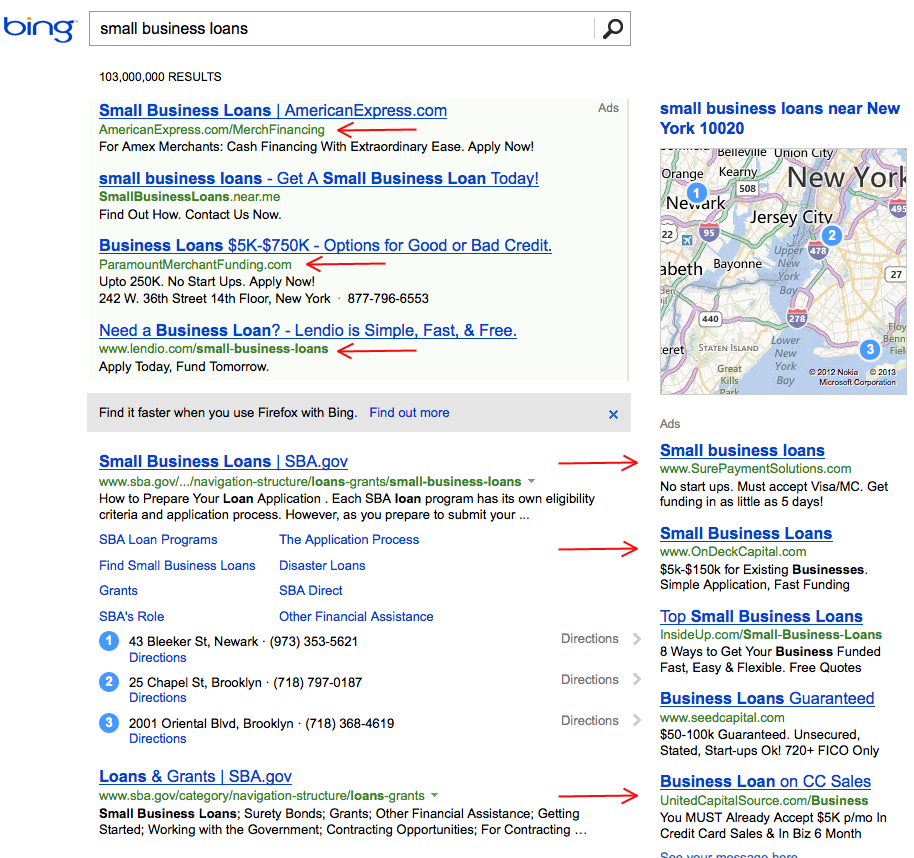 6 out of the 9 companies offer MCA

Where are the multi-billion dollar banks? If $15 a click isn’t in their budget, something is wrong, and it may possibly be due to the fact that business loans aren’t on their priority lists.

Lenders, brokers, and bankers on the front lines can’t stop talking about MCA. It is a recurring theme in their columns:

The alternative financing industry is growing rapidly and, I believe, will continue to grow in 2013. These lenders are extremely entrepreneurial and are leaving the banks behind with their speed and use of technology. Many are backed by premier investment banks and Silicon Valley venture capital powerhouses — investors who understand that entrepreneurs and small-business owners are throwing up their hands in frustration over how long it can take to get a loan from a bank, especially if the loan is backed by the S.B.A. More and more businesses are willing to pay the price of the alternative lenders just to be able to get their capital and move on.

Here’s a dilemma that might have contributed to the growth of MCA… Banks don’t like offering loans and business owners don’t like applying for them if it’s hard:

There’s a large small business segment that needs and wants to borrow on a commercial basis, but their needs are very small. Business owners want $10,000, $20,000 or $30,000 loan–the average is somewhere around $25,000. Traditionally, that’s been a very unprofitable business for a bank. Some banks argue that they are willing to lose money on those loans because they can make it up in deposits. But what happens when the borrower has no deposits? It’s a very tough balancing act.

– Catherine Clifford
Feedback reveals that a burdensome application process and extensive paperwork requirements are enough to discourage business owners even if the loans carry 0% interest.
CNN 1/26/10

Thousands of researchers publish statistics on bank lending every month. Not only do they all contradict each other but journalists that use this data to make bold claims often fail to acknowledge that an increase in bank lending has nothing to do with the applicants, the economy, or the banks themselves. It has to do with the Government. We all know that the SBA will cover the losses banks incur, but there are programs that go one step further. The Federal Government actually bribes banks to make loans. For example, the Small Business Lending Fund is a dedicated investment fund that encourages lending to small businesses by providing capital to community banks. Meaning, covering the losses on defaults doesn’t seem to be enough, so they’ll actually provide the money to make the loans as well. 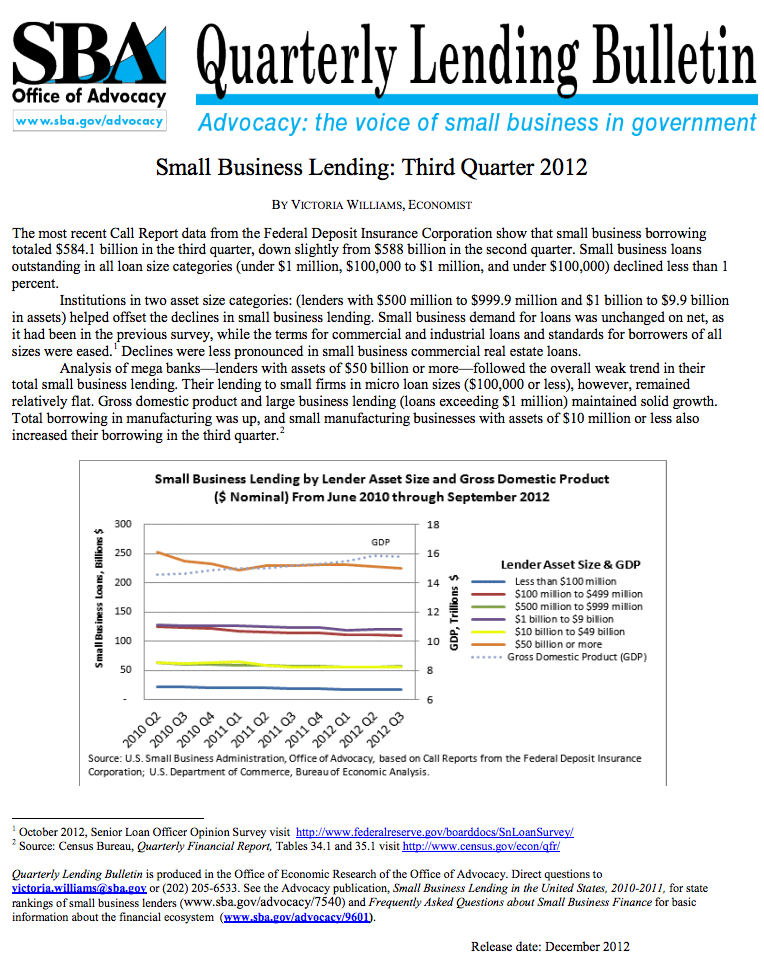 According to the SBA, small business bank borrowing totaled $584.1 billion in the third quarter of 2012. That number dwarfs the volume produced by the MCA industry, but its not an apples to apples comparison. A loan of $1 million dollars is within the range of a small business loan by the SBA, an amount atypical (though not impossible) in the MCA world. Banks are also prodded and coddled by the Government so much that it has reached the extent that we dare claim they are an extension of the Federal Government itself. There’s some food for thought for the Occupy Wall Street movement! They also conveniently got bailed out when they were on the verge of failure, a safety net that MCA companies don’t have.

Subtract the Federal Government’s meddling and there is only one profitable form of B2B lending, Merchant Cash Advance. That is of course again if you accept our definition. There are many young B2B lending firms that claim to be an alternative to MCA, who then go on to describe their product in a manner that is textbook MCA.

Our thesis may be debatable and lacking in concrete proof, but we’re not writing dissertations here. Business owners are increasingly looking to the Internet for loan information and it’s obvious what they’re finding. One would expect a quick Internet search to bring up ads for the billion dollar powerhouses, you know the ones that are given millions to lend out and then millions again when the loans go bad. Instead we find companies owned by friends or friends of friends. The small business loan market isn’t run by anonymous Wall Street kingpins, it’s run by a small community of entrepreneurs that all started from the ground up. Only the community isn’t so small anymore. There was once a handful of MCA companies claiming to be an alternative to a small business loan. Now there are a handful of companies claiming to be an alternative to MCA. It doesn’t take a genius to figure out why that is. After years of fighting to be recognized in the market, something remarkable happened, we became the market itself…