Funding Down to a Science


Account rep: Congratulations, you’ve been approved for $27,000!
Merchant: How did you come up with these figures?
Account rep: It was science. Science did this.

Funny? Maybe not, especially since an underwriting super algorithm may be on its way to the United States. In the days after we posted Made for Each other?, friends, acquaintances, and strangers have been telling us to keep an eye on Wonga’s potential acquisition of On Deck Capital. “It’s not just a european company’s gateway to the US. They’re going to change everything,” a few have said. Aside from their background of being a payday lender, having prestigious VC backing, and the resources to throw a quarter billion dollars at a main street lender in a takeover bid a lot of people didn’t see coming, apparently there is much more to be seen.

Just like MCA in years past, Wonga has worked hard to repel a negative image. Not easy stuff, especially considering they embrace their hefty costs wholeheartedly. Sure, it’s easy to calculate an APR equivalent of a very short term loan and spin whatever number you come up with as the symbol of something evil. If I let a stranger borrow $100 today with the stipulation that they pay me the whole thing back tomorrow plus 1 dollar extra to make it worth my while, would I be evil? That’s an APR of 365%. If I did the same thing with 100 strangers, what are the real odds that all 100 would actually pay me back? Somewhere along the line because of a borrower’s circumstances, bad decisions, or even malicious intent, I’m going to lose the entire $100 I lent out. Others might need more time to pay me back. If one person out of those hundred doesn’t pay back, I break even. If two people don’t pay back, I lose money. If one person doesn’t pay back and another can’t come up with the whole thing, I lose money. You can lend money at 365% APR and lose BIG.

So how do banks manage to charge 4, 7, and 10% APR? Is it just because they’re smarter? No. They don’t make money off loans at these rates either. In the US, interest rates are distorted by government guarantees. Politicians have decided that certain interest rates sound “fair,” then push big banks to lend money at these low unsustainable rates. But of course it doesn’t work and so government agencies sweeten the deal by reimbursing banks for up to 90% of the losses on the borrowers that default. Banks make money on the loan closing fees and other services they sell to the businesses. The loan is the doorbuster offer the bank puts in the storefront window. Once you come inside, they try to sell you on other things so that you don’t walk away with just the loan, otherwise they’re losing money.

So when you hear “banks aren’t lending,” don’t be so surprised. Lending money means giving it away to someone that might not pay it back. That’s a really tough business to be in, no matter how qualified the borrowers are or how good the underwriters are supposed to be.

But somewhere in between the opinions of the Merchant Processing Resource staff and government bureaucrats over what is fair, is a special recipe that determines once and for all what works best. It’s science. Wonga’s lending success is rooted in science and propelled by an advanced algorithm that can systematically calculate risk better than any bank in the world, or so they say. 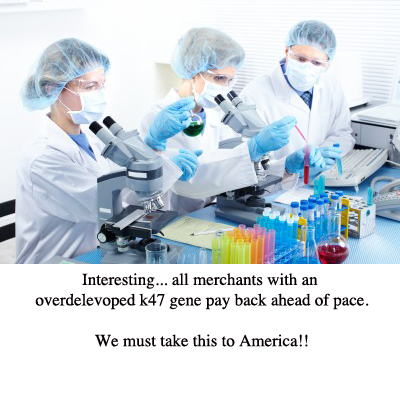 One of Wonga’s major investors, Mark Wellport, is a knighted renowned immunologist and rheumatologist that has defended Wonga’s methods against regulation. He believes their data-based process and strong motivation to make their borrowers satisfied places them in an entirely different category than payday lenders.

Wonga takes a human-free approach, something no MCA provider in North America does regardless of how automated their process may seem. In the UK, their business loan application process takes only 12 minutes and the funds are wired 30 minutes later. That’s it. Their max loan is £10,000 but just think about how that compares to MCA in the US. How much time and overhead is being spent on printing documents, underwriters, conference room meetings to discuss deals, setting up the merchant interview, trying to reach the landlord, trying to get page 7 of a bank statement from 6 months ago and the signature page of the lease, etc. etc. Funders might have had the wrong approach all along.

From the Guardian:
Asking for a loan from a financial institution had traditionally involved making a strong first impression – putting on a suit to see the bank manager – then rigorous questioning, checking your documents and references, before the institution made an evaluation of your trustworthiness. In a way, it was exactly the same as an interview, but instead of a job being at stake it was cash.

Damelin found this system old-fashioned and flawed. “The idea of doing peer-to-peer lending is insane,” he says. “We are quite poor at judging other people and ourselves – you get to know that in your life, both with personal relationships and in business. You realise that we’re not as good as we think we are at that stuff, and that goes for almost everybody. I certainly thought I was much better at it.

The 42-year-old entrepreneur grew up in apartheid South Africa, and he believes the experience of living in that country in the 80s has had a significant impact on his outlook. He was active in student politics at the University of Cape Town and marched in civil disobedience protests. So, when it came to deciding who should be lent money, Damelin says he wanted to strip away some of the prejudice – decisions would be taken without a face-to-face meeting; you wouldn’t even speak to an adviser on the phone, because people subconsciously judge accents too. The final call on whether to hand out cash would be based on “the belief that data could be more predictive than emotion”.

According to Wired, Damelin and his team created a system to approve or decline applicants all on its own. They tested it on a site called SameDayCash by using Google Adwords and within ten minutes of their ad going live, their system had already approved its first customer. In its early forms, it wasn’t very profitable from a lending standpoint but it did allow them to collect a massive amount of data.

From Wired
its strategy over this period wasn’t just to disburse money — it was to accumulate facts. For every loan, good or bad, SameDayCash gathered data about the borrowers — and about their behaviour. Who were they? What was their online profile? Did they repay the money on time? The site was feeding an algorithm that would form the basis of Wonga, launched a year after the beta experiment that was SameDayCash.

MCA has utilized Adwords for lead generation for years with mixed success, but few have used it for the purpose of accumulating facts. This isn’t to say that the firms collecting information for the purpose of leads aren’t sitting on treasure troves of data, it’s just that none of it to date has led to 100% computerized underwriting. The MCA industry is quite possibly about to undergo a major shift in how they promote their product on Adwords as a result of Google’s ominous warning a couple weeks ago. New disclosure requirements may change the way consumers respond and apply, ultimately impacting the data collected.

So will european science work in the good ‘ol US of A? If Wonga acquires On Deck Capital, you can bet they’ll try to replicate their success. There is a gigantic market of really small businesses that aren’t getting funded, and even the ones that are, they’re waiting 3-7 days to deal with the paperwork, handle the phone calls, fax documents, complete a landlord verification, and in some cases, deal with a credit card processing equipment change. If On Deck Capital becomes a household name as Wonga is in the UK, a lot of smaller funders are going to get squeezed.

Wonga claims to have a net-promoter score above 90%, a customer satisfaction metric that beats most banks and even Apple Computer. It’s a company that seems to be winning on every front.

Critics will say that the American lending market is big enough for everyone, that the loans Wonga has done traditionally are really small and therefore not in the same league as MCA, or that their own company has something similar or better. We believe however, that if this deal goes through that it’s a bad idea to get comfortable. There are Wonga-like companies in the US already, data fortresses that will soon revolutionize how loans are issued and determine what makes a successful business. New York based Biz2Credit is one such example.

We’ve been right about a lot of things in the last couple years and wrong about some. But we believe it is inevitable that any lender ignoring the automation revolution on the horizon is not going to last very long. Go ahead, brush it aside and convince yourself that this whole Automation thing is just hype as BusinessWeek did in 1995 about the Internet. “Automation? Bah!”

As Damelin told Wired in June, 2011, “For me the epiphany was right there. People were online, looking for a solution to a problem.” Ask any funder using Adwords or pouring work into SEO and they’ll tell you the same thing. People are looking online for money. What happens after they fill out the form on the website is what makes the USA MCA/alternative lending industry different from Wonga. 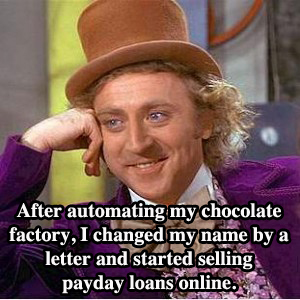 But will a perfected european algorithm work in the US? Americans approach debt and money differently than the rest of the world and small businesses operate in a much more open manner. You never know, the european lab coat wearing scientists could come here and get their butts handed to them. Plenty of smart companies have jumped headfirst into MCA and left after disastrous results. Some veterans that have been in this business a long time will you tell that an impressive resumé, big investors, and a fancy algorithm will help you make it through the first six months. After that, you better know what the hell you’re doing, if you can continue to do it at all.

If in three years the average small business owner thinks Wonga is the last name of a guy that owns a chocolate factory, we promise to write a jingle that admits we were wrong about them. But On Deck Capital has been around the block and knows the business. They would allow Wonga to skip the learning curve and together could quite possibly nail lending down to a science.

Oompa Loompa do-ba-dee-doo, I’ve got another algorithm for you.