Made for Each Other?


You want fast cash loan? “We have Short term loans online from £1 – £1000 with no fax required. Instant approval, 24 hour self-service account access and 15 minute cash payout guaranteed.” Not exactly the kind of advertising you’d see in the Merchant Cash Advance Industry. It sounds like a payday lender headline, the kind of marketing that critics would jump on and rally regulators to put an end to. It’s the antithesis of what many alternative loan providers that operate in the MCA space have come to stand for. And it could be coming to a theatre near you. 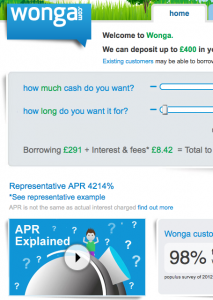 Meet Wonga, an online payday loan company in the U.K. with a representative APR of 4,214%. According to many news sources, they’re looking for an entry point into North America and they may have found one (Watch out Silicon Valley, the Redcoats are coming!). In a deal that would be valued at around $250 million, Wonga is getting cozy with On Deck Capital (ODC). It was only a few years ago that former ODC CEO Mitch Jacobs was warning the public about the high costs of Merchant Cash Advances. It appears their views may be evolving. Not that we have anything against either company, because we don’t. It’s just that when you think of how respected ODC is in the market today, it’s hard to picture them being gobbled up by a company that offers fast cash loans from 1£ and up for a four figure interest rate.

Or maybe this is exactly what we’ve been predicting all along. One of Wonga’s primary investors is Accel Partners, the guys that got in early on Facebook and did a nice deal with Capital Access Network. They are joined by Greylock Partners, a self-described “Leading Silicon Valley Venture Capital Firm,” that coincidentally also invested in Facebook. So what the heck are these two companies doing in the U.K.? It sure looks like they are fulfilling our Silicon Valley Invasion prophesy:

You can't get much more Silicon Valley VC than this...

Bloomberg.com’s article about the advanced stage talks between ODC and Wonga came just TWO DAYS after Steven Mandis walked into the room and bought a material stake of the 2nd largest company in the industry, RapidAdvance.

It seems like just yesterday we were all saying something about financing based off of credit card sales, but now? Now… it’s starting to look like you can get fast cash loan 15 minutes, no fax!

This business gets more interesting every day.

—–
Update: 12/13/12
Wonga does make loans to businesses already in the U.K. The application process takes about 12 minutes and funding happens in 30 minutes. This would be a game changer in the U.S. Refer to this article: http://techcrunch.com/2012/05/07/wonga-extends-its-payday-loans-to-small-businesses-in-uk/