Salaries For All, Even For Gig Workers 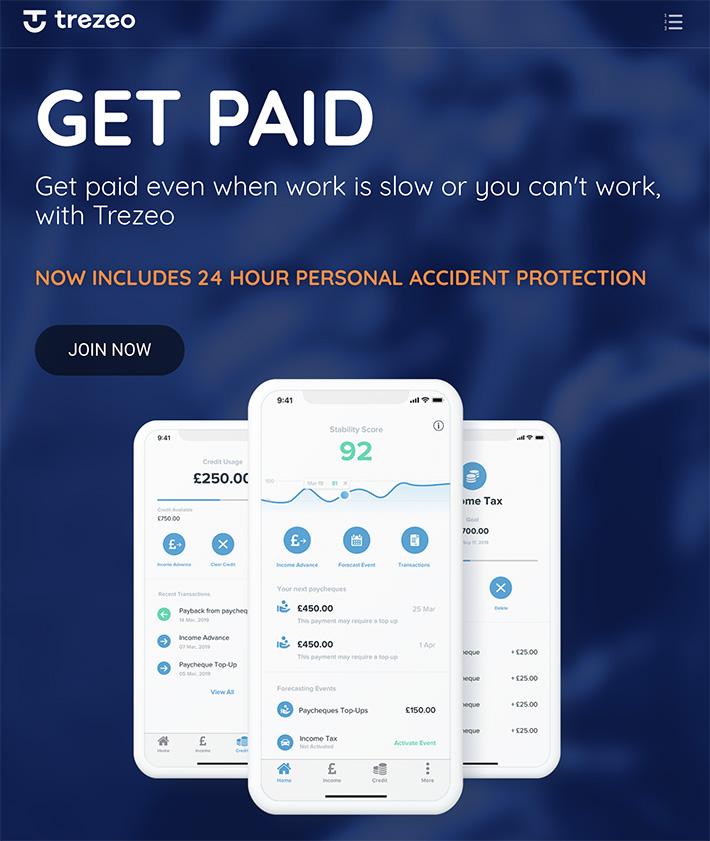 “If we don’t solve the problems, there’s just a nightmare coming.”

This is how Trezeo’s CEO and Co-founder Garrett Cassidy views the work that he and his company are doing. Created in 2016 with the aim to provide support to self-employed people via income smoothing, Trezeo offers workers whose income streams may be irregular the opportunity to have structured and regular paydays similar to those who earn a salary. And with the number of self-employed in the UK currently at approximately five million, as well as projections showing that the majority of US workers will be freelancers by 2027, the company sees its efforts as essential to solving future problems. “There’s a lot of noise around the gig economy,” Cassidy asserted. “But the world is moving that way and we’re very much like ‘that’s fine, you can push back all you want, it’s going that way and we need to create the services that will work for these people.’”

The way it works is that Trezeo serves as an alternative lender, offering regularly paid funds to the customer’s account in exchange for their income that comes in at a later date. A major difference between it and other alternative lenders though is that Trezeo does not charge interest on these advances, instead collecting its revenue from a weekly membership fee of £3.

“We want to allow them to build their own financial resilience and also start looking a bit more useful for traditional financial institutions to engage with,” Cassidy explained. “Our ultimate vision is if you choose to be freelance or self-employed why should you cut yourself off from financial security, why should you trade flexibility for security, and, therefore, that’s the whole ethos of the income smoothing.”

Beyond this service Trezeo has plans to include additional features, such as an income verification system that would help workers be approved for large loans, like mortgages, from banks; as well as an opt-in pension, where instead of being committed to paying a fixed amount each pay cheque, customers could pay 5% of their total income for that period. Trezeo has already gotten the ball rolling with such expansions with the release of its personal accident and disabilities insurance, which covers customers for £300 per week for six months in the case that they are unable to work.

While it may sound as if self-employed and freelance workers are signing up for Trezeo to be their surrogate employer, Cassidy is quick to emphasize that this is instead a new system built to reflect the opportunities presented by technology, distant but reminiscent of the employment structures that came before.

“We’re trying to recreate [the structure] in a way so that a self-employed person controls it and over time can decide what they want … We’re not trying to make them employees, we’re very careful about that, but we’re trying to make it an employee-like experience for them so that they can very easily manage their finances and see them like an employee traditionally would … Platforms are making it easier for people to take the choice of flexibility.”

Speaking to Cassidy in Trezeo’s Irish office in the National Digital Research Centre, an early stage investor in tech companies, we’re snuggly located close by St. James’s Gate Brewery, where the cobbled streets are filled with the nutty and barley-laden smell of Guinness being brewed.

From here is where the development team operates, whereas the risk, sales, and marketing teams work from their London office, with the UK being their only market at this time. However Cassidy assured me that the company is looking interestedly abroad to Western Europe and America with plans to expand.

“This is a very big niche globally,” Cassidy remarked. “And as we’ve gone along, we’ve realized how much of an impact we can have.”

Home › Fintech › Salaries For All, Even For Gig Workers