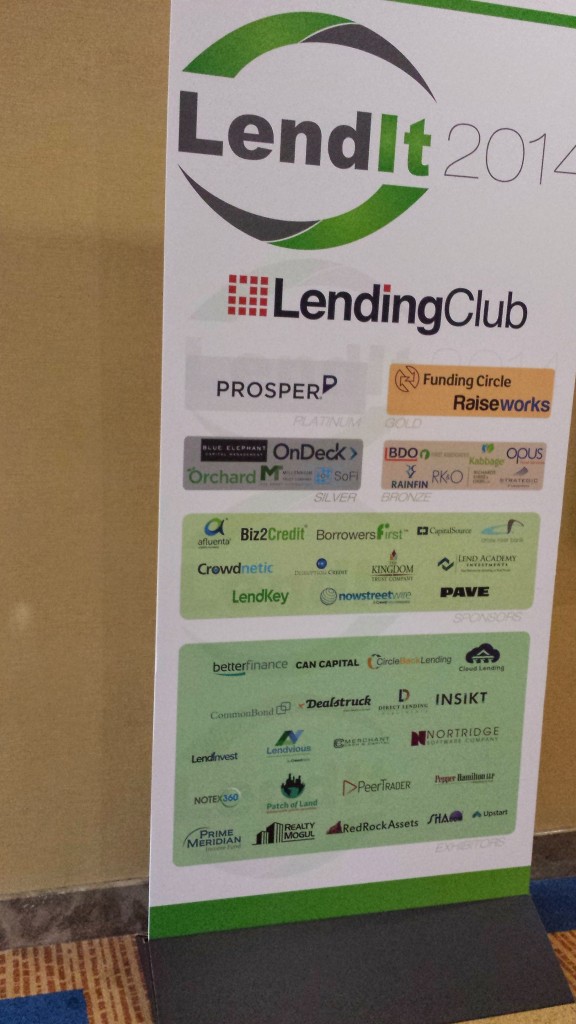 The biggest challenge the wider alternative lending industry faces is awareness and understanding. Those happen to also be two of Suber’s three edicts for growth. The third is education. Just because alternatives are available today doesn’t mean that potential borrowers know about them or feel comfortable enough to use them. Today we are competing against the old way of thinking.

Revolution?
Other products in the new “share economy” have encountered a similar struggle. Several presenters today cited Uber as having revolutionized the way people use taxis. “A long time ago, people used to stand on corners and hold out their hand to get a cab, but that’s all changed,” was the oft-paraphrased proof that age-old industries were falling like dominoes. But as a New York City resident, I hadn’t quite noticed a change at all. Hailing cabs off the street is still very much the norm. It is only by sheer coincidence that I used Uber for the very first time to travel to JFK airport on my way to this conference.

I first encountered Uber a year ago when an acquaintance dazzled me with his ability to summon a car using an app on his phone. It was then that I became aware, but I did not understand how it worked. It took me 12 months to get comfortable enough to try it myself, and the experience was okay I guess if you discount the fact that my driver went through the E-ZPass lane without actually having an E-ZPass. Needless to say, that led to a major holdup that caused me to almost miss my flight.

If it took me a year to get past the confusion of hailing a cab from my phone, I can only imagine what potential borrowers must think when told they can raise money from their peers, the crowd, or a lender that requires payments to be made every single day.

Perhaps most telling about the awareness challenge, is that many people I’ve spoken to at LendIt had never heard of a 16 year old product known as merchant cash advance. That speaks volumes about how much more work merchant cash companies still have to do in order to gain mainstream awareness.

Even those fully aware were not entirely certain about how to define the product. In the Online Lending Institutional Investors Panel, merchant cash advance was briefly discussed as a topic but it was almost entirely spoken in the context of being something that OnDeck Capital does. That would come as disheartening news to OnDeck since they have spent considerable resources in positioning themselves as anything but a merchant cash advance company. Confusion over what somebody is or isn’t will probably increase especially as alternative lenders from different industries start to compete for the same clients.

Funding businesses instead of people
Brendan Ross, the President of Direct Lending Investments, and the moderator of the Short Term Business Lending panel pointed out that a dentist could pursue two different loan options and get completely different results. With excellent credit a dentist could expect to land a 3-5 year personal loan at 7-8% APR on a P2P platform. If he were to apply for the loan using his dental practice though, he could expect to incur costs over 25% and get nothing longer than 2 years.

Ross, who was a very active moderator, subscribes to the belief that businesses are overpaying for credit. Unlike the consumer loan space, there hasn’t been price compression. The cost of business capital remains high, perhaps higher than what is necessary to turn a reasonable profit. Ross argued that the padded cost serves as a hedge against defaults and economic downturns. “The asset class works even when the collection process doesn’t,” Ross said. “The model works with no legal recovery.”

Building on that premise, Ross asked the panelists if an increase in defaults were simply the cost of doing business towards automating the underwriting process.

Stephen Sheinbaum, the CEO of Merchant Cash and Capital argued that just the opposite had occurred, that automation had led to a decrease in defaults. Others on the panel confirmed a similar outcome, though Rob Frohwein of Kabbage admitted they could potentially weather higher defaults through automation by offsetting it against decreased infrastructure costs.

Noah Breslow of OnDeck echoed something similar to Frohwein in the Small Business Term Lending Panel. He asked this question, “Do underwriters add value or not?” and followed up by saying that 30% of their deals were still manually underwritten, usually the deals that are larger. 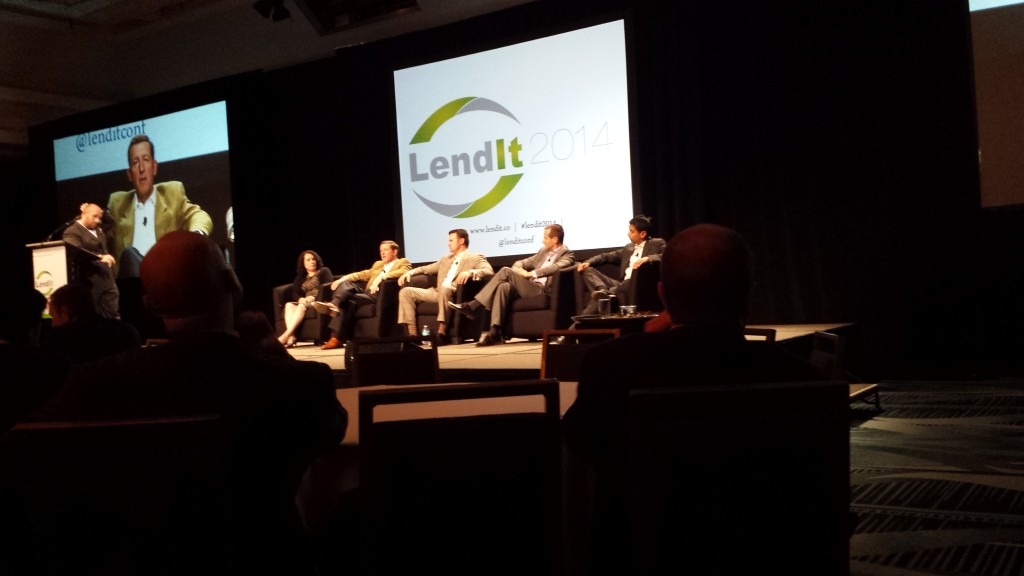 Is full automation right around the corner?
The debate between humans and computers in risk analysis is a featured segment in the third issue of DailyFunder that is being mailed out this week, but there is another angle that is seldom discussed, whether or not customers want automation. Breslow said today that, “if customers want full automation, we are prepared to deliver it.” They’ve learned over time that “many customers want someone to talk to at some point in the transaction.” Rohit Arora, the CEO of biz2credit expressed much of the same in a recent interview with DailyFunder’s Managing Editor Michael Giusti.

The only dissenting voice was Gary Chodes, the CEO of Raiseworks who seemed to be of the belief that human involvement in underwriting was nothing short of ridiculous. He stated that, “if you look back over the last 20 years, the loss rates on business loans under 24 months has been really low.” To him, that data seemed to be proof enough that complete automation could and should be achieved, though he admitted to performing back-end checks such as landlord verifications. They currently have no physical underwriters however.

Is there a transparency problem?
Tom Green, a VP of LendingClub shared an interesting tale. While trying to convince potential borrowers to ditch a merchant cash advance in favor of a LendingClub business loan, they get pushback on the cost of their money. The reason being? Some borrowers think they’ve already got a great deal or at least a better deal than what LendingClub is offering. The problem stems from the borrower’s belief that the holdback percentage set up in their future revenue sale (the most common way a merchant cash advance is set up) is the APR. 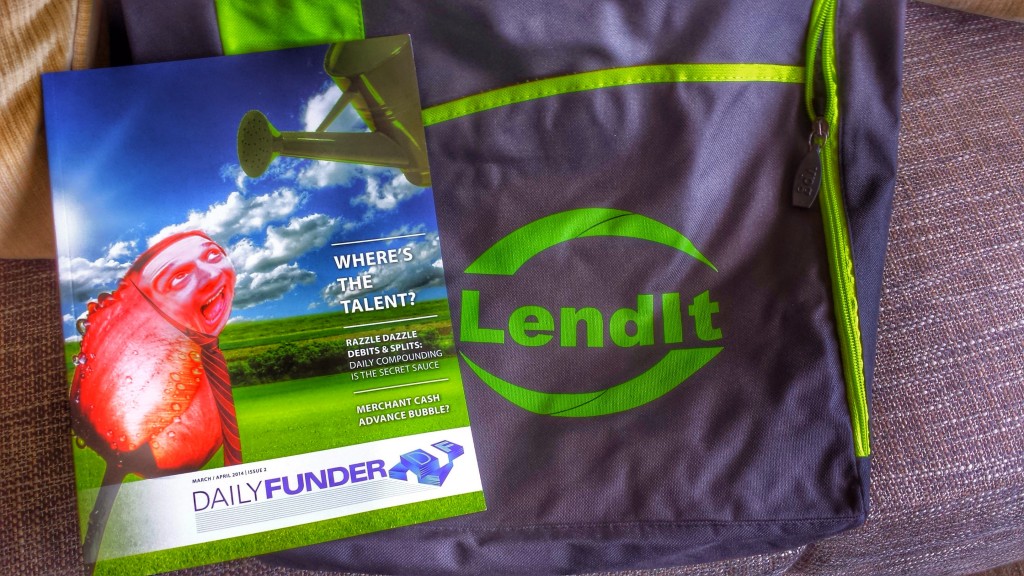 Merchant Cash Advance Companies pay cash upfront in return for a specified amount of a businesses’s future sales. They collect these sales by withholding a percentage of each credit card transaction or bank account deposit until the agreement is satisfied in full. On a dollar for dollar basis, the cost of these programs typically range from 20%-49%, but on an APR basis, substantially higher. The holdback % is not even a factor in the APR. Green said they’ve learned that some small business owners are not sophisticated when it comes to finance.

Ethan Senturia, the co-founder of Dealstruck would probably agree. Earlier today he said, “you need to speak the borrower’s language.” Some understand APR, some don’t. “Dealstruck offers more than just APR comparisons to borrowers,” Senturia said. “Whatever helps them understand.”

When the OnDeck Capital model and merchant cash advance model were questioned as possibly being bad for borrowers, Tom Green was quick to clarify. “There are different capital needs that small businesses have,” he said. And “there is a trade-off between the length of the term and the risk.”

OnDeck Capital’s clients are not entrepreneurs born yesterday. “The typical customer has been in business for 10 years,” Breslow said. Their deals are “structured to protect through daily and weekly payments in addition to the interest rates we charge,” something he reminded everyone was “not single digits.”

Still, transparency issues remain in business lending. Sam Hodges, the Managing Director of Funding Circle explained that when he was previously a small business owner, there were hardly any lenders willing to provide him with an amortization schedule. Ashees Jain, a managing partner of Blue Elephant Capital Management admitted he would find it hard to justify the high rates of merchant cash advance if asked by a regulator, so he’d rather not invest in that market. When it comes to those types of transactions, they “don’t want to have to explain themselves” at some point in the future.

Scott Ryles, the managing member of Echelon Capital Strategies, LLC commented on OnDeck capital’s model as unbelievable. “The arbitrage is huge,” Ryles said. And Eric Thurber the managing director of Three Bridge Wealth Advisors believes that alternative business lenders are at odds with themselves. “They always talk about their risk management,” Thurber said, but he feels that players in that industry are concerned with how much market share they have. That conflicts with risk management in his opinion.

It’s clear at LendIt that there are a lot of products available, but Ryles summed it up nicely. In the consumer space, all the volume is in the 36 month installment loans, he reckoned. For businesses it’s merchant cash advance. “It’s an awareness thing,” Ethan Senturia said in regards to getting businesses to use alternative lending sources.

It is indeed. Awareness, education, and understanding…