Is There Cause for Alarm? 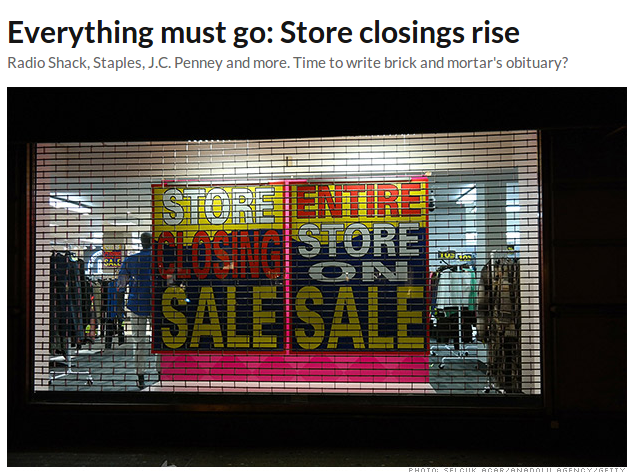 Brick and mortar chain stores died this week, after a long illness. Born along Main Street, raised in shopping malls across post-World War II America, the traditional store enjoyed decades of good health, wealth and steady growth. But in recent years its fortunes have declined. Survived by Amazon.com and online outfits too numerous to list.

Just a day after Jeremy Brown’s new CEO Corner post appeared on DailyFunder with an overt bubble warning, CNN’s Chris Isidore alluded that the era of brick & mortar retail may be drawing to a close. In Isidore’s brief sensational article, he fingers an overabundance of retail space, a weak economy, and the Internet as the culprits behind Main Street‘s decline.

In the broad alternative business lending industry, the sentiment is quite the opposite. Small business demand for working capital is surging and no one is predicting anything less than stellar growth for the foreseeable future. But is the growth real?

Jeremy Brown is the CEO of Bethesda, MD-based RapidAdvance and he explains the growth may not be what it appears to be on the surface. Some cash providers are overpaying commissions, stretching out terms longer than what their risk tolerance supports, and are growing by funding businesses that have already been funded by someone else (a practice known as stacking).

If the industry collectively booked 50,000 deals in 2013 and increased that to 100,000 deals in 2014, you’d have 100% growth, or at least it would appear that way on the surface. What if the additional 50,000 deals funded this year were not new clients but rather additional advances and loans made to existing clients? It’s a lot easier to give all of your clients money twice instead of acquiring new ones.

This all begs the question, is demand for non-bank financing really growing by leaps and bounds? Or does it just appear that way because those that have already utilized it are demanding more of it?

Brown left his readers with this conclusion, “There will be a rebalancing at some point. And it will not be pretty.”

Chime in with your thoughts about this on DailyFunder.
—–

When Will the Bubble Burst? by Jeremy Brown will also appear in the next print issue of DailyFunder. If you haven’t subscribed to the magazine already, you can do so HERE.