It’s not a usurious transaction. That’s how trial courts across New York State have been ruling on merchant cash advances for years, but now, thanks to Champion Auto Sales, LLC et al. v Pearl Beta Funding, LLC, the matter has been settled in a key jurisdiction.

On Thursday, March 15th, The Appellate Division of The First Department published their unanimous decision that the underlying Purchase And Sale of Future Receivables agreement between the parties was not usurious.

In October 2016, the plaintiffs sued defendant Pearl in the New York Supreme Court alleging that the Confession of Judgment filed against them should be vacated because the underlying agreement was criminally usurious. As support, plaintiffs argued that the interest rate of the transaction was 43%, far above New York State’s legal limit of 25%.

The defendant denied it and moved to dismiss, wherein the judge concurred that the documentary evidence utterly refuted plaintiffs’ allegations.

With the case over, plaintiffs appealed the decision. Their major loss is spelled out below: 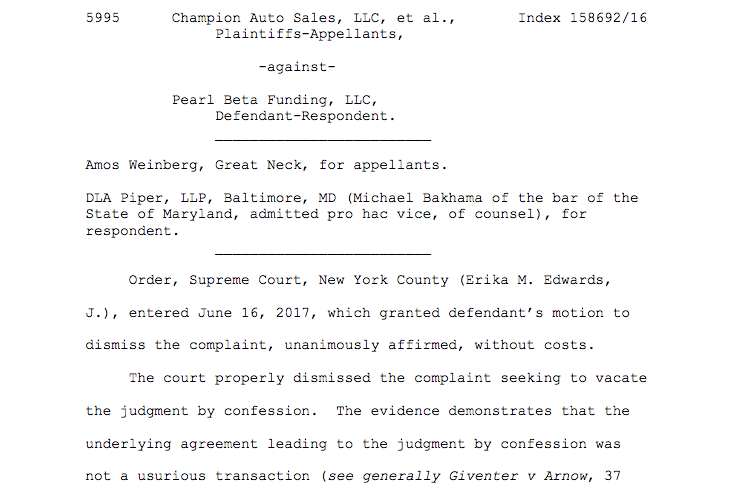 The decision is an interesting chapter in the story of Amos Weinberg, the attorney who represented the plaintiffs in this case. Prior to the appeal, he managed to file more than 100 lawsuits against merchant cash advance companies for usury. He has had very little success on the merits. Last May, deBanked reported that a judge in another lawsuit had admonished Weinberg for misleading the court over the actual wording of what a contract said.

Now he’s responsible for one of the biggest legal decisions in merchant cash advance history. And not in his favor.