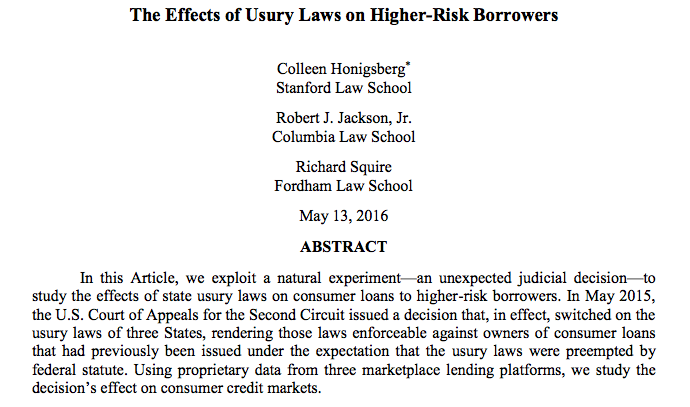 If you thought the Madden v Midland decision was a future risk for marketplace lenders alone, think again. According to a joint study by law professors from Stanford, Columbia and Fordham, one group is already suffering as a result of the decision, people with lower FICO scores.

Since the Second Circuit’s decision only affected borrowers in New York, Vermont and Connecticut, researchers were able to monitor behavioral changes there against other states. They used data from three of the nation’s top marketplace lenders.

But even though lenders became afraid of the usurious implications in these states, borrowers did not take the Madden decision as a signal to stop payment. “[We] are unable to find any evidence of strategic delinquencies,” researchers concluded after a series of tests.

We find, consistent with basic economic theory, that the sudden enforceability of usury laws had the greatest impact on higher-risk borrowers. In a market where consumer loans are generally increasing in volume, the Madden decision disproportionately affected loan volume for borrowers with the lowest FICO scores.

Read the full study titled, The Effects of Usury Laws on Higher-Risk Borrowers