The History of Merchant Cash Advance

Before it was mainstream, it was kind of mainstream. Merchant Cash Advance (MCA) is not new or even relatively new and it definitely isn’t a byproduct of the 2008-09 financial crisis. In fact, in 2007 some people thought the best days of the industry were already behind it. In an August 2007 issue of the Green Sheet, Dee Karawadra expressed reluctance to write about MCA because he believed the subject was stale.

When a GS Online MLS Forum member suggested I write an article on cash advance, I explained my research and said, “I think that boat has come and gone, and I missed it.”

Dee’s article is an excellent snapshot of the feeling of 2007. Excitement was running wild and bold predictions were being made. A lot of the same questions being asked today were asked and answered back then. Those employed in the industry that do not take the time to read up on MCA history are at a disadvantage. And one thing this industry did a great job of, was chronicling all of the events that unfolded.

Prior to 2007, The Green Sheet’s forum was the only source for information. It is still filled with threads going back as far as 2003 on the subject. The discussion seems to begin by one user posing the question:

Who thinks a cash advance program, (a loan) on future credit card volume will help themselves get more deals and their merchants operate better?

By 2004, MCA was all the rage. Competition began to nibble at AdvanceMe’s monopoly, a monopoly they were rightfully entitled to because they owned the patent on split-funding. Many chose AdvanceMe anyway simply because they had already established a name for themselves.

You might want to check out AdvanceMe. I think they have a superior product and service as well as more money too … that you will be better served by AdvanceMe than you would by any of the other Cash Advance companies of which their [sic] are not that many.

And many weren’t even sure what they were selling exactly. Merchant Cash Advance had not yet even been coined as a term:

quick show of hands as to what title you would place on this product… A) Factoring of receivables B) Cash Advance C) something else… Just for the record – I don’t know what to honestly call it.

Those that responded called it an unsecured loan, factoring, merchant funding, and cash advance. Some that weren’t even familiar with the concept appeared completely lost in the conversations. It was common to confuse cash advance as meaning to take a cash advance out on an actual credit card. The need for a universal term was badly needed. An industry couldn’t progress forward if no one even knew what the industry was.

A Way to Build and Strengthen Merchant Account Portfolios

But on the subject of giving money to merchants in exchange for more back, programs offered by AdvanceMe and Rewards Network were compared on the merit of the cost to the customer. Since reps viewed MCA as an acquisition tool to obtain merchant accounts or retain them, commissions and renewals were rarely discussed. They were basically a non-factor and some folks from this era carried this mentality straight into the financial crisis age of MCA. Funders advanced merchants not to make money on advances, but to build their own processing residual portfolios and to sell or lease more POS equipment. The loan, cash advance, merchant funding, or whatever it was of the day was a tool to drive business, not a business itself. Right before and during the financial crisis, funding companies began to streamline their focus and suddenly it became all about funding and nothing else.

The MCA industry has remained in that state for about 5 years and some are starting to think that it’s time to evolve. A poster on DailyFunder.com recently ranted that his company can’t grow unless it diversifies, coincidentally citing that MCA would be better served as an acquisition tool. If this happened, history would repeat itself.

This should be a lesson to the MCA industry which is trying to make a product out of something everyone else views as an acquisition tool. Are we just lenders or diversified businesses? We are the former. As such, prices will never come down, margins can only get slimmer.

In 2004, when the MCA industry was joined at the hip with payment processing, becoming a dedicated funder was a way to stand out from the crowd. But perhaps now that the market is saturated with dedicated funders, it is getting more difficult to build a presence in the market.

In May 2005, The Green Sheet was forced to label the product when it published a story about Merchant Cash Advances. We’re not claiming that this article coined the phrase, but it is a good approximation of when it started to be called such. A few sentences in, they actually disclaim their own term.

There isn’t even consensus on what to call the product, except that it is most definitely not a loan.

The three word term was not even used in the Green Sheet forums until October 2005, and then not again until March 2006. Soon after, that became the term of choice.

The One and Only MCA Blog

As MCA financing took on a life of its own outside of payment processing, the industry turned to a blog to learn about the unfolding events. From 2007 to 2010, David Goldin, the CEO of AmeriMerchant wrote weekly updates about his firm and experiences. He wrote about his harrowing battle with AdvanceMe. After invalidating their patent, he opened the floodgates for any funder interested in utilizing split-funding. He offered honest opinions and had excellent foresight, forever documenting what it was like for the MCA industry during the financial crisis. Anyone that didn’t get to experience that time firsthand should read it start to finish.

As Goldin’s company grew, he turned his focus to other matters. The North American Merchant Advance Association (NAMAA) was formed on April 29, 2010, a non-profit alliance designed to bring peace and order to an industry that had gone through tremendous turmoil in the last few years. He all but abandoned the blog afterwards.

Free Info for All

Where Goldin left off, I resumed by starting a credit card processing/MCA blog in July 2010 named Merchant Processing Resource (MPR). At that time, I was an MCAer that had toiled away as both the head of an underwriting department and as an account executive. The blog covered a lot of topics and was targeted towards business owners and ISOs simultaneously. I believed there was a vast amount of data that newcomers didn’t have about MCA and set off to share as much as I could without self-promoting a product or service.

By December, my web host (a very simple blog site named Webs.com) informed me that the website was using too much bandwidth for the current package. I upgraded it only to encounter the same problem again 9 months later. The site was forced to transfer to a real host in order to grow and be able to handle the surging stream of visitors. Webs.com’s format was not conducive to transfers and as a result, every article written prior to August 23, 2011 was time-stamped with that very date.

To recap, the Green Sheet and their forums were the places to follow MCA from 2003 to 2007. Goldin’s Blog narrated the story from 2007-2010 and MPR has carried the torch since then. If we go further back, and we believe everyone should, you’ll find that AdvanceMe kind of existed in a world of their own in the late 1990s. In 1999, they funded $9 million. What they were funding annually increased to $200 million by 2006, a time when they had already amassed more than 14,000 clients. These aren’t exactly the humble beginnings of a new industry. These are serious numbers that could arguably support the theory that MCA was already well into the mainstream.

MCA in Black and White

MCA information was publicly available nearly two decades ago via the U.S. patent office. Barbara S. Johnson is listed as the official inventor of split-funding AKA Automated Loan Repayment in documents filed in 1997. There were no forums or bloggers to explain how it worked. There was only this: 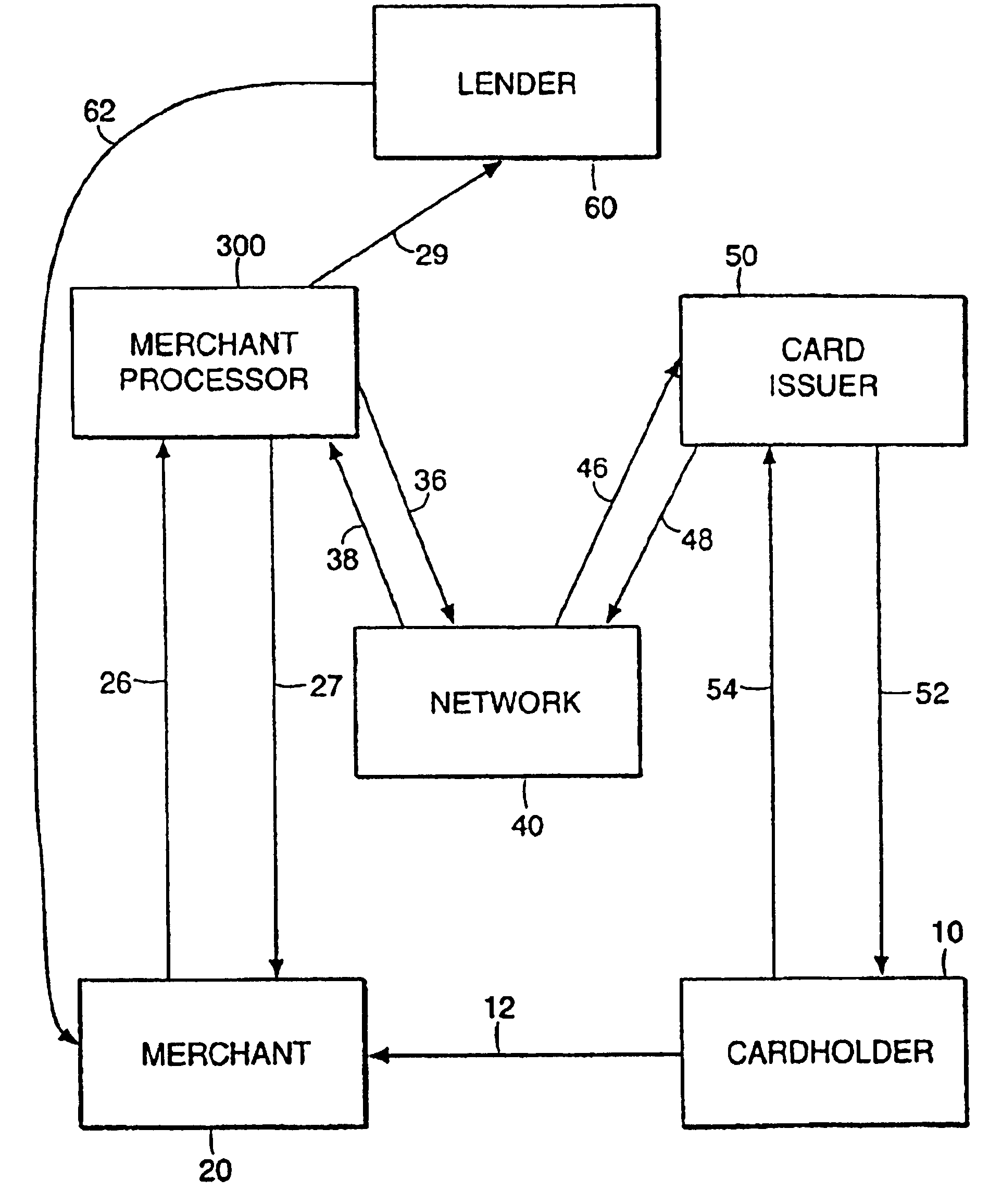 The Automated Loan Repayment kicked off an industry that would evolve significantly over the next 15 years and yet a payment processor was already doing this to fund merchants as far back as 1992. Litle & Company didn’t call it MCA. That name didn’t even come about until around 2005, but they were the first MCA funder in the country. The makes MCA more than 20 years old.

Been There, Done That

We may have closed a chapter in 2012 when it became evident the product had finally graduated from the minor leagues, but there is a forever long story that preceded it. MCA financing existed before some account reps were even born. Sadly some of these kids talk to prospects today without really even knowing what they’re selling. Then again, in 2004 no one knew what the heck they were selling either. There is still technically no formal name especially since split-funding is no longer the standard. If the poster in 2004 posed the same question today about what to label this product as, there would be just as much disagreement. Business cash advance, merchant financing, ach advance, cash flow loan, ach funding, merchant cash advance, unsecured loan, merchant loan. Nobody really agrees and nobody really even does it the same way as everyone else. It’s all MCA to me and I’ll keep reporting on it for as long as it lasts. And as long as it keeps reinventing itself, there will always be a chance to get in early. Those that read up on the past or were there and experienced it firsthand have a major advantage. History repeats itself in MCA.

You know those butterflies you’re getting about 2013? They were felt before in 1998, 2004, and 2007. MCA was kind of mainstream before it was mainstream. 2012 ignited a spark and some of us know what’s going to happen next. As for the rest of you, brace yourselves. It’s going to be more crazy than you can imagine.