Are You Ready to Ride The Merchant Cash Advance Wave?


Less than a year after we acknowledged the stunning absence of Merchant Cash Advance financing from the mainstream media, suddenly it’s the only thing being talked about. It took a few years but journalists are finally learning to complete the phrase of banks aren’t lending with, fortunately there are other options. The term Merchant Cash Advance is being thrown around so much that financial institutions that offer different funding programs entirely such as American Express are trying to attach their names to it. They are now trying to rebrand their product as Express Merchant Financing. This isn’t to be confused with a Dallas, TX based company called Express Working Capital which offers Merchant Cash Advances. You can understand why there is so much confusion. Merchant Cash Flow Loans too, which are micro loans based on gross sales are often identified as Merchant Cash Advances even though there is little common ground.

But let’s not fuss over small details because it’s not just the funding companies that are talking about it now, it’s the media.

No matter how well your website is designed or how good your sales people are, it’s important to recognize that small business owners think like normal consumers. According to a 2007 Nielsen Survey, 63% of people’s trust in a company forms from newspaper sources and 56% from television sources. Even though this type of financing has been around since the 1990s, the lack of news coverage has held the industry back. Despite the advancement of social networking and internet background searches, the majority of Americans still have that If it’s on TV, it must be true mentality. Why else would political candidates still be spending billions of dollars on TV commercials to get their message across? 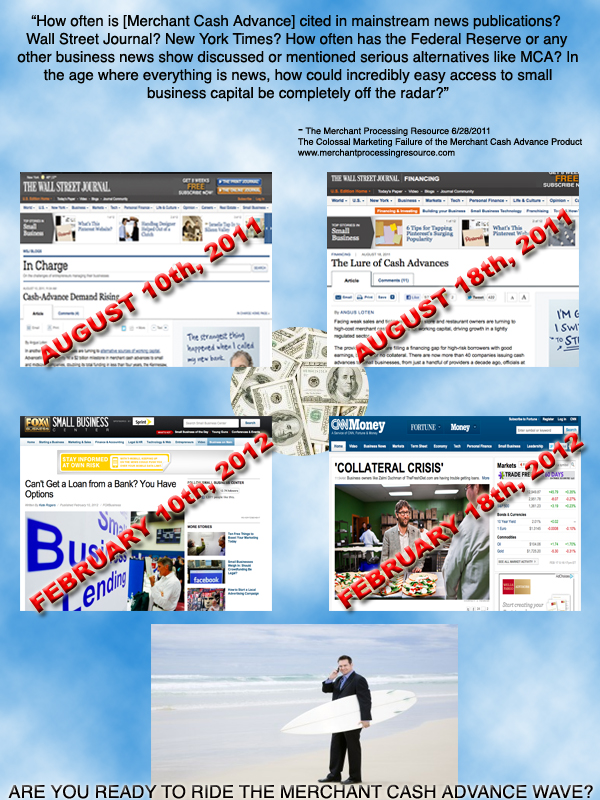 The broad use of Merchant Cash Advance terminology, the recent recognition by the mainstream media, and the march of average Americans into the reseller market is an omen. A wave is coming. Whether some deem the current industry’s size to be $600 million a year or $1 billion is irrelevant. Merchant Cash Advance and similar financing programs have the potential to be a $10 billion market annually, especially since the major banks are retreating from SBA loans.

We suspect that in 2012, particularly the latter half of it will be explosive unlike the entire industry has seen before. Too many small businesses have been waiting on the sidelines since 2008. If the trend of rising employment is correct and a real recovery is underway, then we’ve got all the ingredients for a perfect storm. Confident Business Owners + Fast, Easy Access to Capital = American Recovery.