Five years ago, everyone seemed to add the phrase, “but I also do mortgages on the side” in response to questions about their career.

Times have changed and today the new side gig is reselling Merchant Cash Advance (MCA), at least in the New York metropolitan area. The Independent Sales Office (ISO) model is dissipating into a few thousand sole proprietors, all of whom are competing for the same prospects. Most of them started at one of the larger ISOs or funding sources and have over time traded it for the opportunity to work for themselves. Others have pushed it aside as a part time gig while earning a living in another line of work. 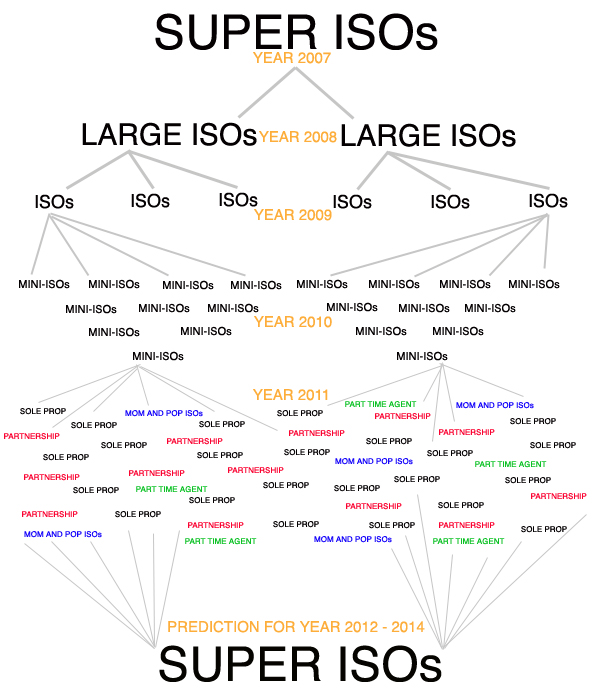 It’s encouraging to see that the entrepreneurial spirit is alive and well in the city that never sleeps, but riding solo has its disadvantages. For instance, marketing budgets are more constricted. This inhibits the ability to attract clients, especially when competing against a sizable ISO, who likely has thirty times more to spend on advertising, systems, and service.

And yet, I haven’t heard many complaints from independent agents, which may mean the MCA industry is far from over-saturated. Sixteen of my former co-workers have gone on to start their own MCA ISOs. I even know a pair of twin brothers that run ISOs independent of each other. Some of these newly formed mini-ISOs (less than five people) break apart and each member seems to go on and repeat the cycle.

The Derailing of the Shakeout
In early 2008, it was predicted that low budget marketing would cause a massive shakeout of MCA resellers. David Goldin, the CEO of AmeriMerchant published the following in his blog:

There is another train of thought that is inevitable to fail – those that thought they can sell business cash advances with minimal capital expenditure, meaning hiring unqualified salespeople using inexpensive marketing techniques such as voice broadcasting (with these providers giving the same data to 100s of phone rooms) to dial hundreds of thousands of businessses an hour with a prerecorded message. (Merchants around the country are getting 3 – 5 prerecorded calls a day). The challenge is the quality of anyone that is going to press ‘2’ on their phone for money tends to be “lower hanging fruit” and lower quality deals. With the recent credit crunch and many merchant cash advance funding companies tightening up, some merchant cash advance agents were seeing approval rates as low as 15%-20%. There is no way they can survive and stay in business with that kind of approval rate.

Back then, it was quite popular to have a hundred sales agents in a single room making phone calls. Overhead was the biggest part of the budget, which in places like New York City, could consist of tens of thousands of dollars in rent alone. Add that to all the money that was spent on technology, payroll, dialers, and commissions, and it became really easy to generate a net loss.

With the emergence of mini-ISOs, many are foregoing traditional overhead expenditures such as the renting of a centralized office. Technology costs are also being eliminated since most people already own a personal computer and a cell phone, the only two tools really necessary to interact with prospects. As for state of the art auto dialers? Well, many agents are completely fine using inexpensive resources such as phone books or public UCC filings. Ask around in the MCA industry and you’ll learn just how prevalent this practice is.

There are so few barriers to entry in the MCA industry, that it catches a lot of folks from other financial fields off guard. We receive a dozen e-mails a month from mortgage brokers, stockbrokers, and insurance agents asking what licensing requirements they will need to sell MCA. There are none of course, but they more are shocked to learn that there are no regulations to abide by either. Take your cell phone, throw in your e-mail, spend twenty bucks on a website and you’re an official MCA reseller! It’s just that easy. Thousands of people are getting in on it.

Who is Who?
The flood of resellers and fly-by-night agents is making it increasingly difficult to know where all the MCA money is actually coming from. Here on the Merchant Processing Resource’s website, we’ve created transparency by listing the largest direct funding providers. Need to know if that UCC filing is MCA related? We can help you with that too.

We’re also working on creating an official directory of resellers, for which there will be some requirements for inclusion. That means if you’ve e-mailed us on this topic already and you haven’t heard from us yet, be patient. You will be contacted soon with instructions on how to become an approved MCA reseller.

Consolidation
In the meantime, the increasing fragmentation also presents an incredible buying opportunity. Large ISOs that are looking to add to their portfolios and leverage the brand names that mini-ISOs have created should be able to buy them out at very affordable prices. When this practice starts to happen, it’ll be interesting to see what the market value of mini-ISOs are. Could a business owned by two individuals with a pool of two hundred clients be worth $50,000? $100,000? $300,000? Once someone sets the bar, we should prepare for a year of consolidation, and the little guys will get gobbled up by the big ones. A lot of folks could end up walking away very rich or disappointed. Perhaps now is a good time for your Mother to go into the MCA business for herself and flip the value created for a nice profit a year from now.

ISOs on Steroids
The popularity of co-funding or syndication is also allowing the remaining large ISOs to really flex their muscles in a way they weren’t able to in 2008. Syndication is where an ISO is able to invest their own capital in the MCA deals they close. For instance, on an advance of $20,000, $15,000 of it might come from the MCA funding source, and the remaining $5,000 from the ISO themselves. As long as these accounts perform well, syndicating can create a supernatural rate of growth. This further whets the appetite for opportunities to expand.

So why are mini-ISOs a buying opportunity? Customer loyalty is something big companies can’t always shake, no matter how much is spent courting them. Furthermore, these mini-ISOs tend to have historical performance records on their clients, data that is incredibly valuable. Should a Super ISO invest $20,000 in a small business that has never used MCA before or should they invest it in a business that has responsibly used MCA for two years with no issues, exhibits fierce loyalty, and has a proven record of success? The opportunity to participate in funding that business now and repeated times in the future should be worth a lot.

The Unknown
There are other forces at work that may reshape the industry in a way we can’t predict. The incredible rise of micro-lending is cannibalizing the MCA market, but is also allowing ISOs to offer a variety of financial products to a larger pool of businesses. One New York City MCA funding source privately revealed that micro-loans now make up 80% of their monthly funding volume, a stunning shift from their MCA-only portfolio of 2010.

The growing popularity has also caught the attention of regulators and in some states, the purchase of future credit card receivables is being governed by existing lending laws. The day may come when every agent needs a license to sell, but until then, thousands of people are playing the biggest game in town, helping small businesses get funding to grow. Are you a part of it?