John Tozzi of BusinessWeek is just about the only journalist that follows the Merchant Cash Advance (MCA) industry. We use the verb “follows” loosely since he manages to write maybe one article per year on the subject. Rarely flattering, he does at least provide something that other writers do not: Substance. In his lastest piece, Wells Fargo Plays Both Sides of the Cash Advance Debate, Tozzi reminded us of something we’ve failed to address in this blog: big banks aren’t just becoming interested in MCA, they’ve already been involved in it for a long time. It also made painfully clear a message we’ve been trying to communicate for years, that ultra low interest rates are simply not feasible in small business lending.

Tozzi accuses Wells Fargo of sponsoring a small business lender that is directly attacking MCA companies while at the same time financing the companies being attacked. California based Opportunity Fund recently began offering a loan program that is…wait for it…repaid by withholding a percentage of credit card sales. They call it EasyPay and they’ve made no effort to hide their belief that they’ve achieved some kind of higher moral ground by charging only 12% APR. In their press release yesterday, they pounced on the competition:

While similar card-based payment systems exist in the private sector in the form of merchant advance loans, they routinely carry exorbitant interest rates that range from 104-177 percent. By contrast, EasyPay loans carry an annual interest rate of just 12 percent.

Wells Fargo awarded them cash and their “hypocrisy” is apparently history. Why? Wells Fargo has also backed prominent MCA providers RapidAdvance and Capital Access Network. This might come as news to some people, but not to us. What Tozzi may not realize is the main driver of the MCA industry has been and continues to be…banks. Sorry to break it to the small minority of people that suspect MCAs are part of some shadow banking system. Most small businesses are unaware that their funds may indirectly be coming from Capital One, Community National Bank, or even Wells Fargo! 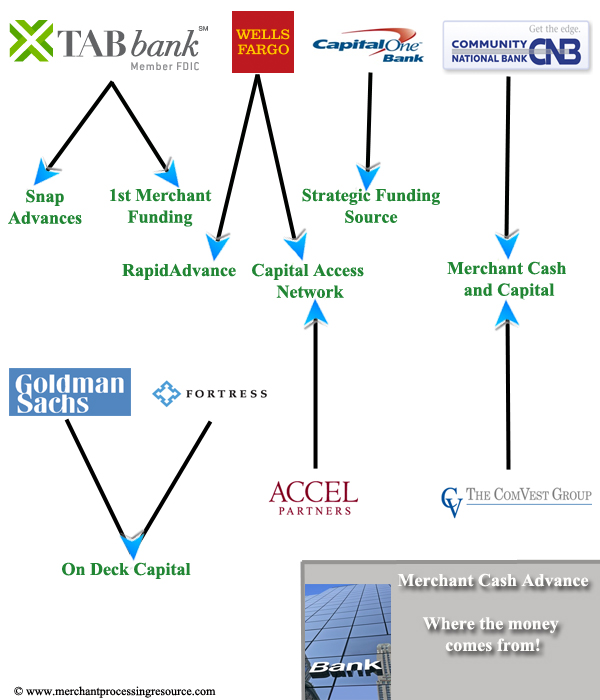 And let’s come to terms with another hard fact about small business lending. Opportunity Fund is proof that you can charge 12% a year and be guaranteed to lose money. In the BusinessWeek interview: “At that rate, the nonprofit is not covering its costs, says Marco Lucioni, the lending director who created the product. Opportunity Fund subsidizes the loans to keep them cheap.”

Subsidies? Whhaaaaa??? Oh you didn’t know? Opportunity Fund is a registered 501(c)(3), a charity. Don’t get us wrong, we love charity and we think it’s wonderful that small businesses in California may be eligible for an EasyPay loan. We can’t help but be bothered though that a charity is attacking the private sector for charging “too much” when they acknowledge that their own rate of 12% (more than double the allowable interest rate on an SBA loan) is entirely unprofitable. We’ve made this charge over and over and over again. The world we lived in where business loans regularly came in at 5% annually was really just an artificial market caused by the SBA’s agreement to reimburse banks for all defaulted loans. But in the real private sector where there is no tax payer default guarantee, or charitable donors to put downward pressure on cost, it becomes clear that the MCA industry is the free market as it should be.

We also reject the characterization that MCAs are “expensive” since there are literally hundreds of funding companies and a thousand ways to structure a deal. That’s the problem with journalists that only drop in once a year or so, Tozzi has no idea how much has changed. Merchant Cash Advance simply means short-term business financing. The costs may be the equivalent of 1% APR or 200%. It could be a purchase of future sales or a fixed daily repayment loan. It might have everything to do with credit card sales or nothing to do with them at all.

The use of the split-funding method by a charitable business lender definitely highlights just how mainstream the ideas of the MCA industry have become. Hopefully they are prepared to deal with the rapidly evolving technology environment. They just might learn there’s a reason that Wells Fargo is also playing the other side. Companies like RapidAdvance and Capital Access Network are well-oiled machines and are respected by the small businesses that fund them. Tozzi calls this awkward. We think the banks in the diagram would beg to differ…

Follow the money and you’ll see why the MCA industry is a bet anyone would make.

Notice: the diagram may illustrate relationships that are out of date and omits that nature of the financing arrangement.