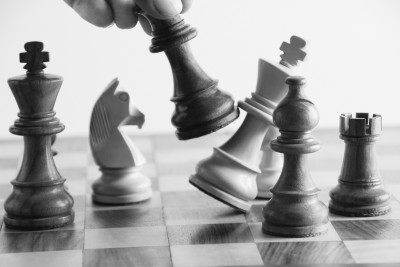 Let’s admit it, we’re all at war. If you’ve uttered the terms Panda, PageRank, Backlinks, or Organic in the last few months, you know what we’re talking about. We didn’t choose this fight, Google forced it upon us. And so after a long day of phone calls and handshakes about affordable working capital, we return to our homes at night and search the web. Not for information of course, but to find out where our company website pops up when we Google the phrase: Merchant Cash Advance or other relevant terms. Today we ask, is the fighting worth it?

In 2007, back when the industry hadn’t put much thought into the Internet, the #1 search result for Merchant Cash Advance was the blog by David Goldin, the CEO of Amerimerchant. It made sense because it was a self proclaimed “online resource dedicated to the merchant cash advance industry.” There, small business owners and competitors could read about the trials and tribulations of an industry on the verge of explosive growth. It was interesting, it was informative, and best of all, he ranked first without trying.

Nowadays, it’s all commercial. Merchant Cash Advance companies with fat advertising budgets are spending thousands to rank for their favorite keywords, with Merchant Cash Advance still high on that list. The friendly information resource has been replaced by a website that not only crushed the competition in search positioning but seems to publicly brag about it too.

Everyone else is apparently forever dwarfed and dominated. What a great message for your prospects.

Do keep in mind that your results may differ slightly depending on your region. Google geographically targets searchers to bring them the most relevant matches.

How much is the #1 spot worth? The market priced it at $75,000 three months ago when MerchantCashinAdvance.com was sold in an online auction for that amount (saved in pdf). So which powerful Merchant Cash Advance company unloaded their precious website? None. The owner of the site was actually an SEO guru looking to make a quick buck. He studied the industry a bit and then within two months ranked a site at the top of Google.

75k might even be considered a steal, as we were actually approached to purchase that website ourselves in August 2011. The exchange was a bit contentious, with them being unwilling to accept less than $200,000 and us making an insulting offer of $100. Perhaps it was jealousy or perhaps it was because we didn’t realize how a Merchant Cash Advance website could be worth so much, but the discussion quickly degraded into name calling and we never spoke again.

How many small businesses are searching for Merchant Cash Advance anyway? According to Google, there are 14,800 searches for it a month. We assume that at least 75% of those are from the companies offering it. You probably Google the phrases several times a day yourself. Admit it!

The real money is in the long tail keywords, since merchants are more likely to personalize their search. Being first for merchant loan for bad credit might be more potent than Merchant Cash Advance. It’s tough to say since deBanked doesn’t really rank for either of those. Then again, we’re an information destination, much like David Goldin’s Blog was/is.

We’re not SEO experts, but we do quite alright with Google ourselves. Without giving away all of them, this is our current placement for just the following keywords:

MerchantCashinAdvance.com was no different and they claimed to be #1 for over 300 business lending related keywords. A spreadsheet of the analysis they put up during the auction can be found here.

With nothing more than an organic search presence, they claimed to have had the following results:

If that’s the case, then $75,000 was a bargain. That no doubt led to the auction of a similar site just a month later. MerchantCashAdvances.org is currently ranking 51st for Merchant Cash Advance. They claimed to earn $12,500 annually in ad revenue and $200,000 in commissions. The starting bid was $10,000 and although there were many inquiries, it didn’t sell.

That doesn’t mean it wasn’t worth the price. Most Merchant Cash Advance companies are secretly or not-so-secretly investing thousands into SEO campaigns. Black hat SEO is rampant and even the most reputable companies have engaged in it at some point. The underwriting room is the one they show their clients. The sales floor is the one they show their new recruits. But ask where the internet marketing room is, and they’ll claim it doesn’t exist. But it does of course. They’re usually small quarters with no windows that are filled with computers armed with software like ScrapeBox, Article Marketing Robot (AMR), XRumer, and a list of working proxies.

Even the white hats are building backlinks manually and creating endless articles for use on their own company blogs or for services like BuildMyRank. One moderately sized Merchant Cash Advance company in New York City has just as many SEO employees as they do sales representatives. For some, this is just the beginning. It’s not unusual to spend $10,000 – $20,000 a month on pay-per-click campaigns.

The Internet has become a place where the person with the most to spend wins. Because of competition, a paid Google campaign for Merchant Cash Advance keywords can cost $20 per click! We did a phone call with Google and were told that less than 10% of clickthroughs convert into a sale or completed form. If only 1 out of every 10 visitors calls or inquires through the site, that amounts to $200 for a single lead. If only 1 out of every 5 of those leads turn into a closed deal, the acquisition cost is effectively $1,000. That number is awful especially considering commissions and factor rates have been rapidly declining over the last year. And merchants wonder why this financing is more expensive than a bank loan…

It also explains why the practice of closing costs and service fees have survived internal industry scrutiny. Some resellers would be operating in the red without them. Organic traffic is in essence free, that is if you don’t consider the salary or fees you pay your SEO team. Hopefully they don’t overdo it and place your site in the Google sandbox. Until then, the rewards outweigh the risks and every day the industry pushes the envelope a little further in the quest to rank on page 1.

If you can earn $200,000 a year from a website or sell one for $75,000 after two months of work, then there is plenty of room for growth. If the industry was saturated, it wouldn’t be that easy. If your mother is getting into the Merchant Cash Advance business, make sure she knows how to market her website. It’s a war out there.