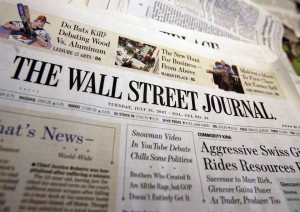 Have you ever had a deja vu moment where you feel like something has happened already even though it hasn’t? And then all of the sudden it happens? Yeah, we just got a little of that. Or maybe we’re just psychic.

It was just a couple months ago that we published a scathing editorial on the failure of the Merchant Cash Advance (MCA) industry to reach mainstream acceptance. (See: The Colossal Marketing Failure of the Merchant Cash Advance Product – June 28th, 2011). Most of our readers acknowledged the shortcomings but were at a loss for suggestions to overcome them. ISO&Agent Magazine quickly added their two cents by claiming that MCA was waiting for its big moment (See: Cash Advances: Negotiating a Maturing Market – July 26th, 2011) but completely missed the mark when they identified cost as the obstacle holding it back. It’s not cost, it’s communication.

Today we can say that Merchant Cash Advance got its mention in the Wall Street Journal. :::Applause::: Though it’s only in their blog section, most people today get their news online anyway. The article features AdvanceMe, the largest and oldest player of the bunch. So how does the glorification of one company carry over to the industry as a whole? There were a bunch of good messages in there that describe the product itself: The article title implies it’s becoming more popular: “Cash-Advance Demand Rising” A description of how it works: “Merchant cash advances, which first appeared about a decade ago, provide capital in exchange for a share of future debit or credit-card sales. As such, they tend to be used by retailers, restaurants and other small businesses where a large number of customers pay with cards.”The common uses for it: “Business owners use the cash to buy new equipment, restock inventory or pay off debt” Yes, Yes, and Yes. Good for AdvanceMe and good for the MCA industry but this is only the beginning.

Every business owner should be aware of MCA, not just the ones that read the Journal today. It is Un-American (Yeah, that’s right) to withhold information from business owners that may enable them to capitalize on opportunities. With no bank loans available, most projects in this country are on hold. It’s simply not fair. We badly want to take the credit for today’s Journal mention, especially since we delivered our two previous articles on this topic to their editors in July. But the real hero here is AdvanceMe. Their press release the day before clearly caught the attention of the mainstream media. Great job guys. And we’d be remiss if we didn’t point out they forecasted an increase in funding by $1 billion in the next 2 years. That’s about equal to the industry’s entire volume combined. Is Merchant Cash Advance about to hit its growth spurt? AdvanceMe seems to think so. If they’re about to have their ‘moment‘, they’ll likely pull everyone else along with them.