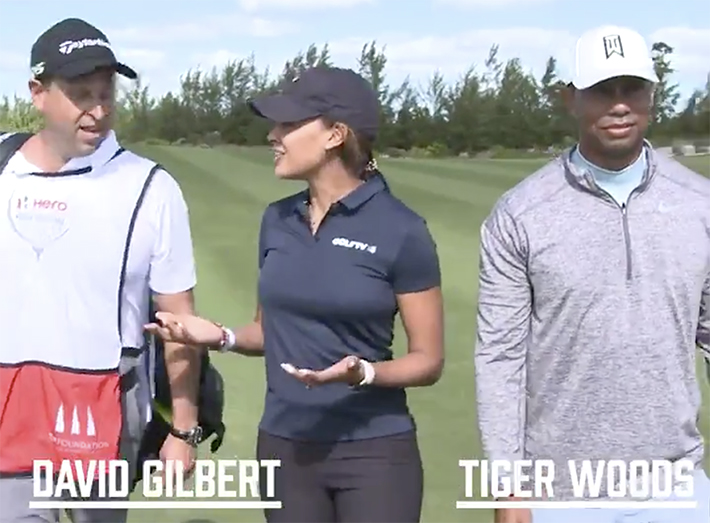 David Gilbert, the CEO of National Funding, had the honor of caddying for Tiger Woods on Wednesday at the Hero World Challenge pro-am in the Bahamas. Gilbert earned the opportunity by being a very generous participant in a Woods charity event held earlier this year. The proceeds went to the TGR Foundation. Gilbert told deBanked that National Funding has been supporting the organization for years.

You can watch the video highlights of the two of them below:

Ever dreamed of caddying for @TigerWoods? One man got that chance earlier this week. pic.twitter.com/lFWomIqN7q 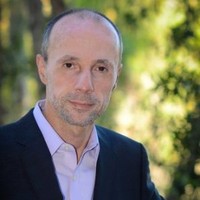 Today National Funding announced that Joseph Gaudio has been promoted to President of the company, reporting directly to founder and CEO Dave Gilbert. Previously, Gaudio was Chief Operating Officer.

“I can’t think of a more exciting time to be a part of the business and the SMB lending industry,” Gaudio said. “I look forward to working closely with our talented senior leadership team to further our mission of helping small businesses across the U.S. secure the critical capital they need to grow their businesses.”

This announcement comes just weeks after National Funding acquired QuickBridge, another alternative lender based in California.

Prior to joining National Funding, Gaudio was the CEO of Superior Mobile Medics for five years. He led the sale of the company to Quest Diagnostics and then served as part of the integration of the acquisition for Quest.

“Since joining National Funding in 2017, Joseph has helped propel the company to one of the top 10 alternative SMB lenders in the nation, and has been a driving force during our rapid growth,” Gilbert said. “Joseph’s strategic thinking capabilities, strong business acumen and his more than a decade of industry experience geared towards the small to medium business market provides critical firepower as we build National Funding into the leading brand serving the financial needs of Main Street America.”

Founded in 1999, National Funding is based in San Diego and employs roughly 230 people. It now also owns QuickBridge, with headquarters in Irvine, CA and a small satellite office in New York. The QuickBridge name and most all of its 100 employees remained in the recent acquisition. National Funding has provided more than $3 billion in capital to over 40,000 businesses nationwide with loan volume expected to exceed $500 million this year. 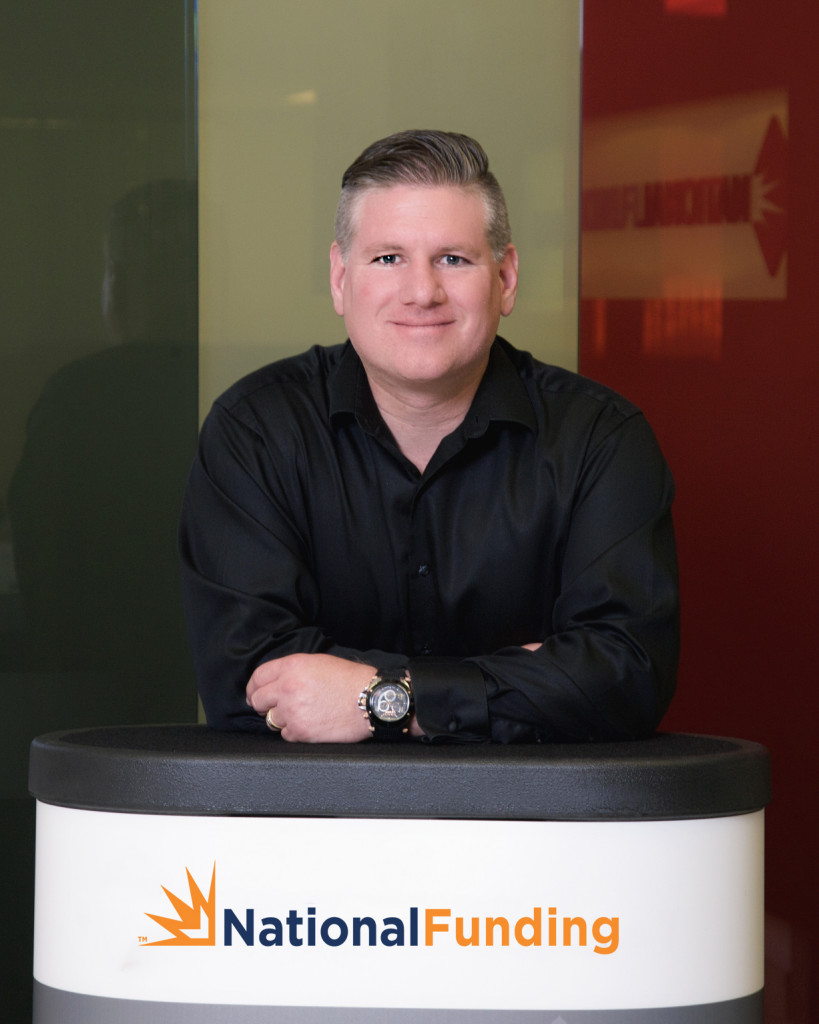 National Funding announced today that Justin Thompson, formerly Executive Vice President of Sales, has been promoted to Chief Revenue Officer of National Funding. The new position is an expanded role that will include Thompson’s previous management of a 100-person sales division that includes Direct Sales, Renewal Sales, Broker Sales, Equipment Financing and the responsibilities of developing the company’s new Strategic Partnership vertical.

“On the heels of our acquisition of QuickBridge, and the explosive profitable growth of National Funding, this is a great time to expand our offerings to clients with new products and solutions,” said Dave Gilbert, National Funding founder and CEO. “Justin has led sales through the biggest growth period in our 20-year history and I am thrilled for him to continue building on this strong record.”

“I have never been more excited about the future of National Funding as I am now,” said Thompson. “With the acquisition of QuickBridge, expansion of our strategic partnership channel, and the ever-improving performance of National Funding, we have a lot to offer our customers and brokers – making us an important resource for small and medium-sized businesses nationwide.”

National Funding has also made two additions to support the growth of Strategic Partnerships. Jason Osiecki, previously Head of Sales for QuickBridge, has been named Vice President, Strategic Partnership for National Funding. He will be tasked with driving growth opportunities in the merchant processing, leasing, B2C, Lender Decline and other markets. And Kevin Kane has been appointed as Director of Business Alliances. He will manage day-to-day relationships with brokers across the country. 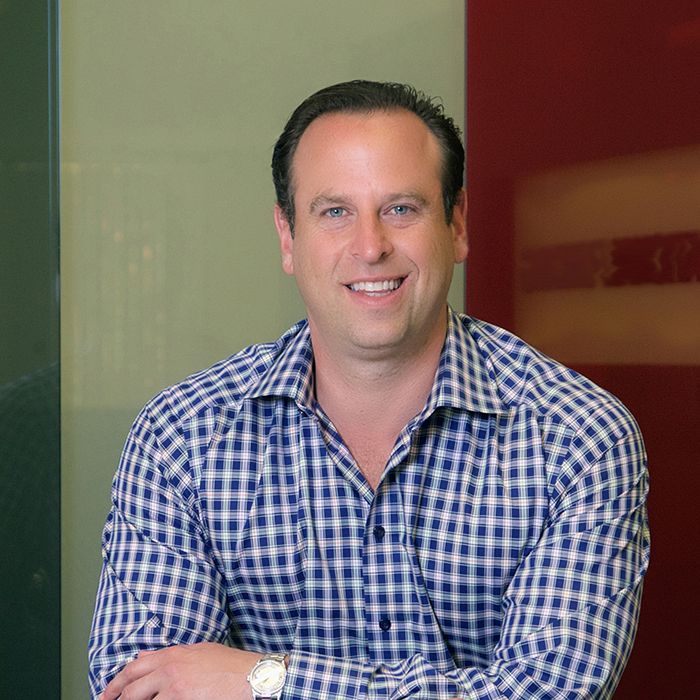 National Funding announced today that it has purchased QuickBridge. The two companies will combine back-end resources, including advanced technology, innovation and product development, but they will continue to operate independently, as separate brands. Ben Gold, QuickBridge’s founding President, will remain in his current post and will work closely with National Funding founder and CEO Dave Gilbert.

National Funding was a minority interest owner in QuickBridge since the company’s founding in 2011, so this acquisition was essentially a buyout of five other partners.

In addition to the technology, Gilbert said QuickBridge’s people and its headquarters in Irvine, California were elements that made it very appealing.

“There’s a lot of great talent in Orange county and there are a lot of finance companies out there, so it’s going to be a great recruiting hub,” Gilbert said.

Given the high quality pool of talent, Gilbert said he believes he can scale QuickBridge quickly. Together, National Funding and QuickBridge have provided more than $3 billion in financing to small and mid-sized businesses and their combined overall financing volume will exceed $600 million this year, according to National Funding. QuickBridge has been recognized in recent years for its rapid rise, including year-over-year double or triple digit percentage growth.

The way that both companies get business is slightly different. Gilbert said that QuickBridge derives 75 percent of its business from ISOs and 25 percent from direct marketing, whereas National Funding’s ratio is the inverse, with a sizable direct sales team.

In addition to QuickBridge’s headquarters in Irvine, it also has a small satellite office in New York, which will remain. Of the company’s roughly 100 employees, Gilbert said that virtually all of them will stay on. Founded by Gilbert in 1999, National Funding is based in San Diego and employs roughly 230 people.

National Funding has signed on as the title sponsor of deBanked CONNECT San Diego. The half-day event for funders, lenders, brokers and industry professionals is being held at the Andaz on October 4th!

REGISTER FOR THE EVENT HERE 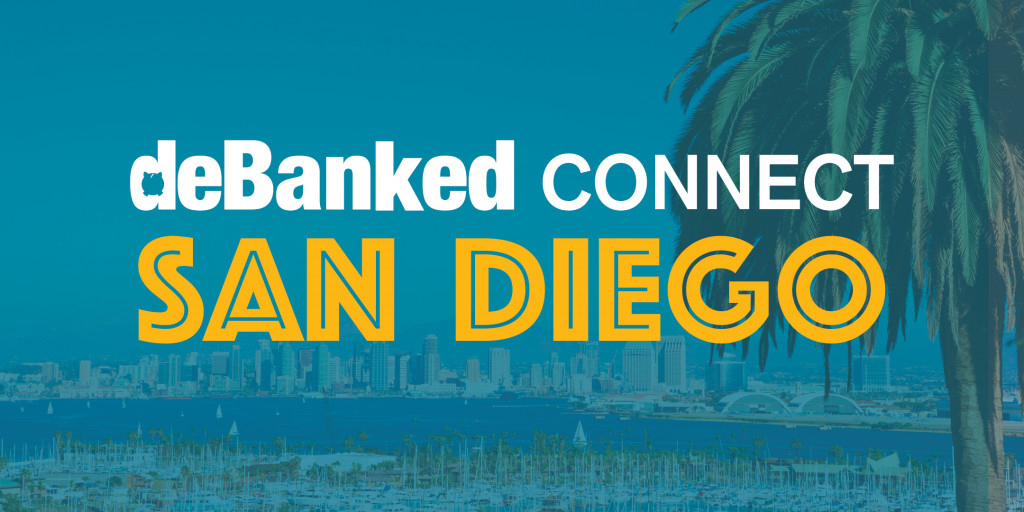 Check out photos from deBanked’s past CONNECT event in Miami

The 17-year-old company funded $152 million in loans in the half of 2016, up 45 percent from the same period last year. The company’s customers include general contractors, medical services and trucking companies that average about $1 million in sales annually.

While 80 percent of the loans are for working capital, the company has seen demand for equipment leasing slowly resurge after the financial crisis. “After 2008, the market turned negative in LA and we had to shrink our company,” said CEO Dave Gilbert.

The company is also preparing for a technology overhaul, trying to get access to data pools to automate underwriting. “We need to be tech driven,” he said. “As deals get smaller, we need to automate them to make it affordable.”

National Funding generates 25 percent of its loan volume through brokers. “Given everything that’s happening in the industry, a lot of lenders will be forced to become balance sheet lenders,” he said.

The company hired Geoff Howard from Intuit to lead its technology efforts and aims to automate underwriting for 40 percent of its deals, doubling up from its present rate of 20 percent.

The average size of its loans is $50,000 and the company also plans to launch its first long-term loan product later this year. 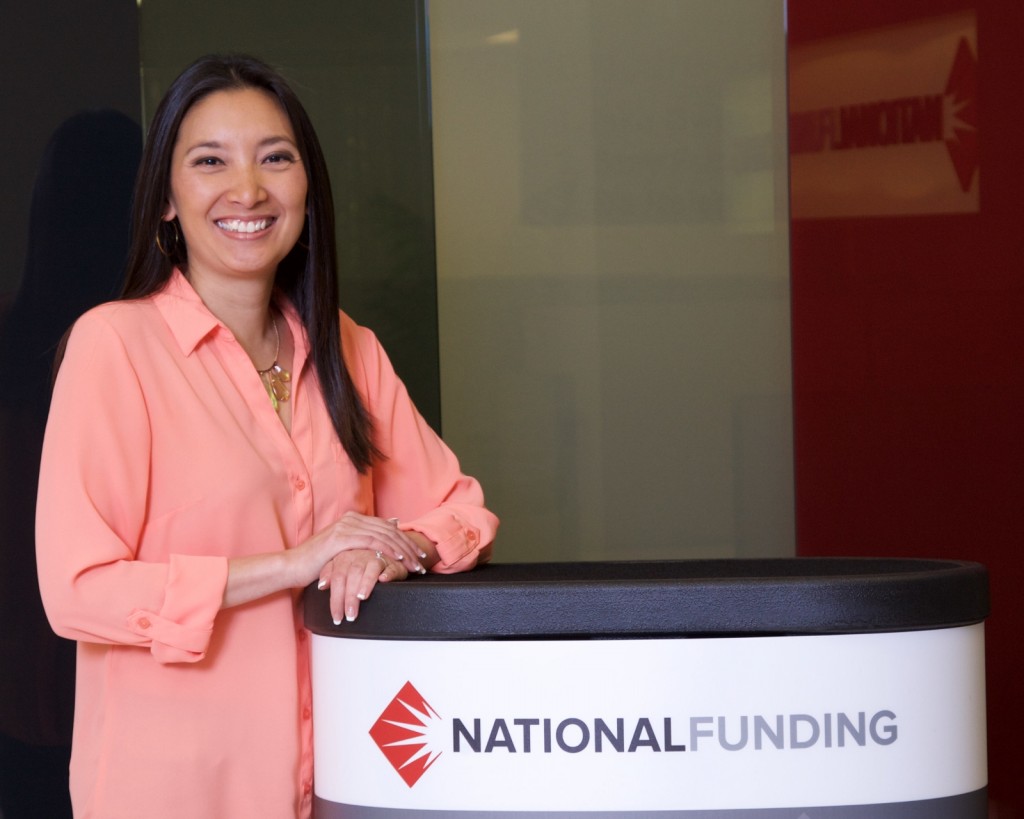 When I met with San Diego-based National Funding President Torrie Inouye at Lendit, I was surprised to learn that the company had quietly funded $293 million to small businesses in 2015, enough to earn them a spot on deBanked’s top 10 alternative business funder list. The company isn’t new. They were founded in 1999, which puts them in the same category as CAN Capital, a 90s era relic that has not only survived but has continued to evolve and quite literally be a leader of the pack.

Inouye graduated from Stanford University in 2001 with a BA in Economics and started at National in 2004 where she worked as a Corporate Strategy Analyst. After 3 and a half years, she went on to play key roles at Union Bank and Intuit before returning back to National in the Fall of 2014. With a strong background in data analytics, Inouye took over as the company’s president just last week. Dave Gilbert, the company’s founder, has been the CEO since the beginning.

“Dave has always understood that data is valuable,” Inouye said, adding that she had been tasked with harvesting it.

“One of the trends that we’re seeing in our data is our direct mail response rates being much higher than what other people might expect,” she said. “We’re still surprising really good at direct mail.”

Others within the alternative lending space have made similar assertions, which ironically kind of undermines the concept of online lending itself. For Inouye, she says the online part is “the product.”

“You can control the message and you can control who you’re talking to with direct mail,” she explained. Though in a way the offline tactic is driving people to engage online. “A lot of our direct mail response comes through our website,” she said.

An expanded version of our interview will appear in deBanked’s May/June 2016 edition scheduled to come out in early June. Subscribe FREE here. 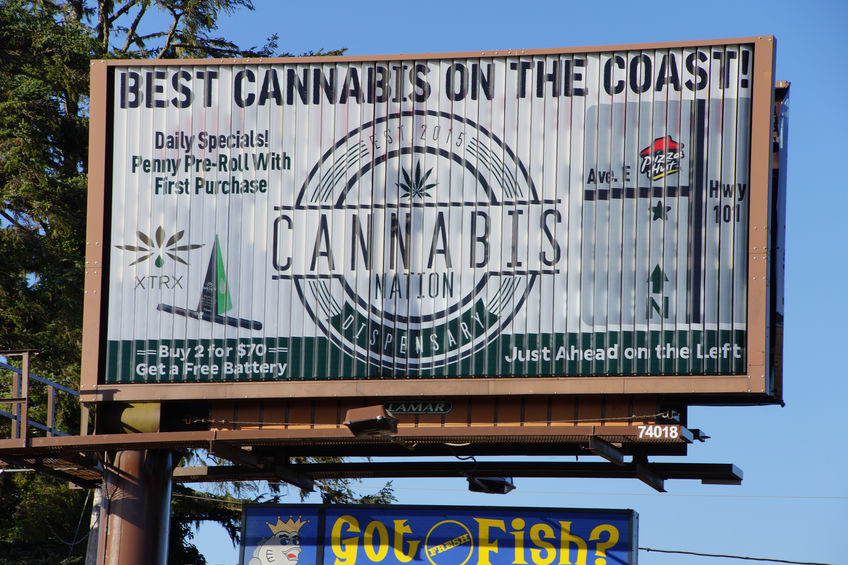 Today National Business Capital & Services (NBC&S) announced it has begun serving cannabis companies. Through its new program, CannaBusiness Financing Solution, NBC&S is now accepting applications for loans starting at a minimum of $10,000 from firms in the industry that are over one year old.

“The CannaBusiness Financial Solution will allow business owners to seamlessly obtain the capital they need, and allocate funding toward either hiring new employees, purchasing inventory, marketing strategies, or any other business need right away, without government regulations hindering growth opportunities or having to give up equity,” explained NBC&S President Joseph Camberato. “We’re not a bank and the lenders we work with aren’t banks either, so it falls into a different area of commercial lending.”

CannaBusiness is available in the 33 states where cannabis is legal, be it for medicinal or recreational uses, as well as in Canada.

“WE’RE NOT A BANK AND THE LENDERS WE WORK WITH AREN’T BANKS EITHER, SO IT FALLS INTO A DIFFERENT AREA OF COMMERCIAL LENDING”

“It’s a rapidly growing space, no pun intended,” joked Camberato when asked about the differences in funding cannabis companies compared to the industries NBC&S has served in its 12 years of business. “It would still be underwritten, just like one of our normal businesses. But we’re definitely going to want to know a little bit more about the business and understand what exactly they’re doing, how they’re operating, and exactly what are they’re focused on.” They’ll also examine if the business is in compliance with state laws. Qualifying cannabis companies must be in business for at least 1 year, with a minimum of $10K in monthly revenue. There is no minimum FICO score requirement. 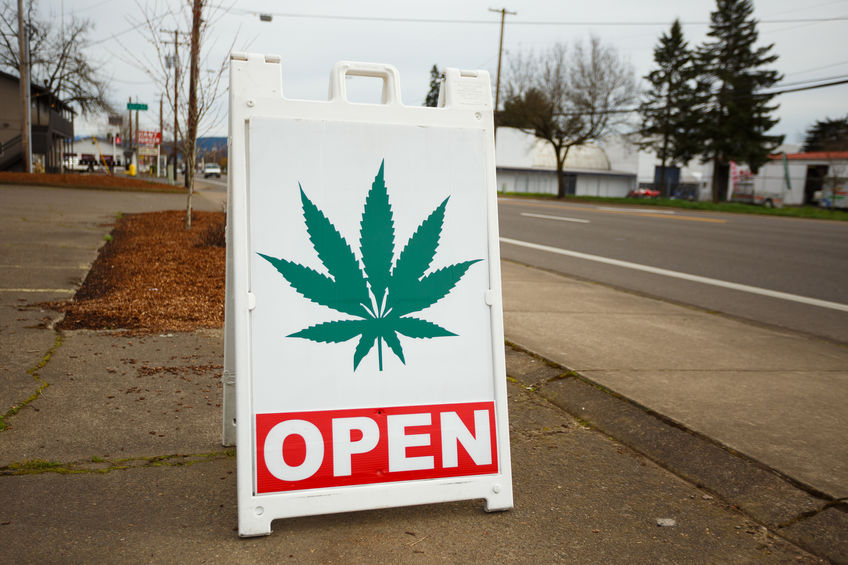 While it’s not the first funder for cannabis companies, NBC&S views the move as a step in the right direction to “get ahead of the curve” according to Camberato. “We’re living through a modern-day prohibition, I think in 20 years we’ll look back on it and talk about it with our grandchildren and be like, ‘wow’ … I don’t think people realize how big of a deal this really is, but it is a business and it is another industry that has bloomed in front of us, again no pun intended. I think it’s fascinating that we get to witness this and that we’re really at the forefront of it and helping folks get the funds they need to grow.”

Jumping off from the politically charged word of ‘prohibition,’ NBC&S’ Vice President of Marketing, T.J. Muro, noted that he believed cannabis legislation to be one of the few issues that can be bipartisan, saying, “Out of everything today in our political climate, I think it’s the one thing that has unified people in the political parties. The liberal side appreciates the cultural influence and significance there, and then on the more conservative side it’s the tax revenue.”

The upcoming Senate vote on the SAFE Banking Act will put this theory to the test. The bill, which would allow the cannabis industry wider access to banking, has already passed the House.