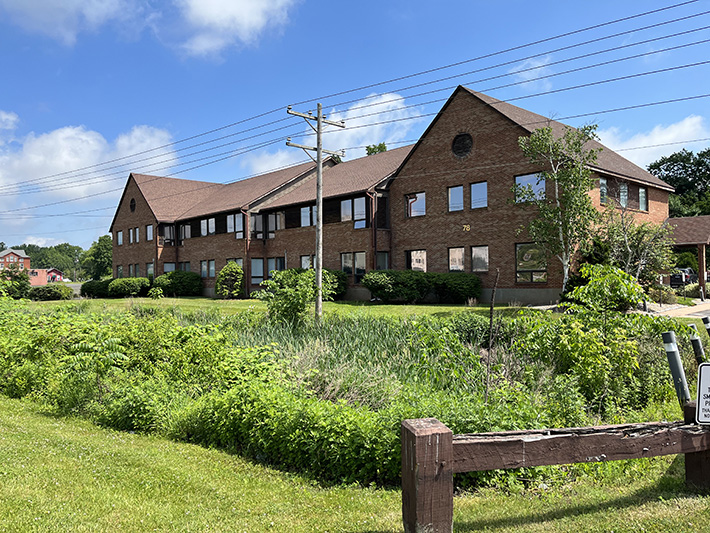 Just a few miles outside of Hartford, cars exited the highway and advanced towards a quieter part of Connecticut. The aptly named “Beaver Road” is home to Wethersfield’s US Postal Service building on one side and the Connecticut Farm Bureau building on the other. Drivers veered towards the latter and pulled into a parking lot situated behind a literal babbling brook. There are other tenants besides the Farm Bureau in the expansive brown-bricked commercial-use building as indicated by a sign outside, but the business that people had come to celebrate hadn’t even been added to it yet.

Nevertheless, the blue and white balloons waving in the wind outside the back entrance were a clue that this was the right place. Inside, on the first floor, a line of people found the large plated logo of Latin Financial, a small business that helps other small businesses obtain working capital.

Already personally acquainted with the firm led by Sonia Alvelo, she led myself and others on a tour of the company’s new space. Latin Financial employees were easily identifiable by their blue company shirts, but others wore green to signal that they were part of a sister company named Sharpe Capital. Sharpe is spearheaded by Brendan P. Lynch.

Both brands previously operated in nearby Newington but outgrew what they had. When the ceremony officially kicked off with some impromptu speeches, the prominence of those assembled became evident. It included, among others, the Better Business Bureau, the local Chamber of Commerce, and the Connecticut Children’s Hospital.

Wethersfield’s mayor, Michael Rell, was also there. Rell welcomed Latin Financial to the neighborhood, echoing the note sang by other government officials.

Connecticut State Senator Matthew Lesser shared his appreciation for Alvelo and her company’s mission to provide capital to underserved small businesses both in the state and across the nation. Lesser explained that the state legislature had recently decided to delay a proposed commercial financing bill (Senate Bill 272) so that it could further assess the input from companies like Latin Financial and the potential impact it would have before moving forward. A version of the bill will be reintroduced next year.

Meanwhile, Joseph Rodriguez, Deputy State Director for US Senator Richard Blumenthal’s office, said that he was impressed by the company’s accomplishiments and contributions to the community. He presented Alvelo with a Certificate of Special Recognition signed by Blumenthal in honor of her new office and for her service to Connecticut Small Businesses. 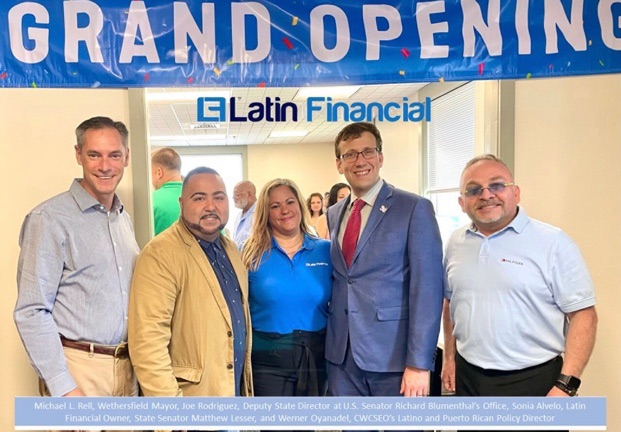 Werner Oyanadel, Latino and Puerto Rican Policy Director at the Connecticut General Assembly’s Commission on Women, Children, Seniors, Equity & Opportunity, said that Alvelo had “been a good partner of [their] work at the Capitol” and that “Latin Financial is filling a big void assisting new businesses and Latino entrepreneurs’ access to needed reources.”

Employees of both Latin Financial and Sharpe appeared excited by all the fanfare while friends and family members were proud to share in the moment. Alvelo ceremoniously cut a blue ribbon for the cameras and in conversations that followed it became known that they were hiring.

Alvelo has previously spoken at Broker Fair in New York and deBanked CONNECT Miami. She has been a primary source of information for deBanked since 2016 on matters regarding small business financing in Puerto Rico.