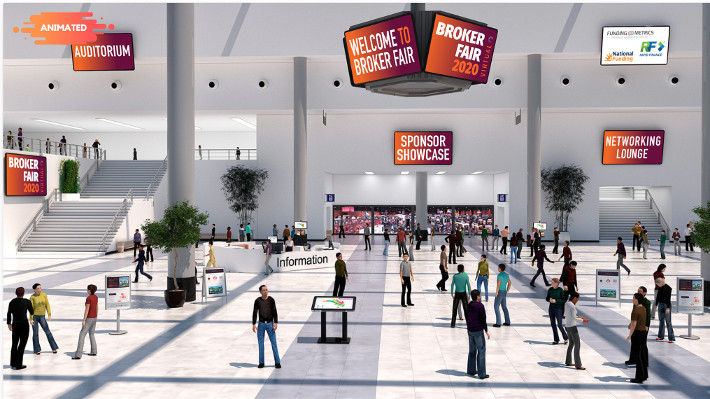 Last week’s Broker Fair Virtual was the first of its kind for the industry. The day-long event offered talks and networking, just like the in-person event, albeit without the catering service and open bar. Offering a digital space that included a virtual auditorium, networking lounge, expo hall, and individual company booths, the event attempted to recreate the experience of connecting and mingling with the rest of the industry, as much as was possible.

Kicking off with a Matrix-inspired introduction to the virtual space led by alternative finance’s version of Neo’s mentor, Mur-pheus (Murray as Morpheus), the show then went in numerous directions, with panels and talks covering a variety of topics and sectors.

Funding Metrics’ David Frascella took to the virtual stage to talk about how his company and the industry at large have been getting through the pandemic; what’s to come for America was up for discussion with Scott Rasmussen, the veteran pollster, who elaborated on how business could be effected by the upcoming presidential election; the future of combining people with data was debated by figures from Become, Elevate Funding, and Ocrolus; Canada’s lending situation and prospects were talked through in Covid and Canadian Credit;The new normal was discussed by NYC’s Fintech Women; and John Henry, an entrepreneur and star of VICELAND’s ‘Hustle,’ spoke of his experience running businesses and what made his story a success.

As well as this selection of talks, another standout was the cannabis panel. Led by a number of industry veterans, which broke down the difference in funding marijuana-based companies compared to other deals, and what could be down the road for the industry as more states consider legalization.

National Funding’s CRO, Justin Thompson, held an extended Q&A session, fielding queries about how National has been faring through these times and what its approaches are as the economy begins to open back up.

How long-term is long-term for the coronavirus’s impact? Are SBA deals the way to go? Does the industry need to go further with its adaption to this new normal? All these questions were asked and answered in The Great Debate, a panel made up of industry figures from various backgrounds.

And brokers’ futures were considered by Lendio’s Brock Blake, United Capital Source’s Jared Weitz, National Business Capital & Service’s James Webster, and The Watson Group’s Gerald Watson. Here, the idea of a recovery, how each struggled through March and April, and PPP were all debated by the panelists, with perspectives of what’s to come leaning both ways.

There’ll be an evolution of new industries and how we do business,” Gerald Watson noted in his closing words, “just look at this conference for example.”

There was no lobby to find brokers and funders hashing out deals in relative privacy away from the expo hall, instead this was replaced by private messages exchanged. Rather than line up for some chicken wings, people chowed down to whatever was in their home on that day. And instead of gathering around a bar and finishing the day after the final talk, attendees cracked something at their desk and chatted it up in the networking lounge, recalling previous events and what was once taken for granted: the ability to connect effortlessly.

The coronavirus continues to physically keep people apart, but for one day last week the industry was able to come together and network, make deals, and gain insight; albeit in a different way, internet connections providing.