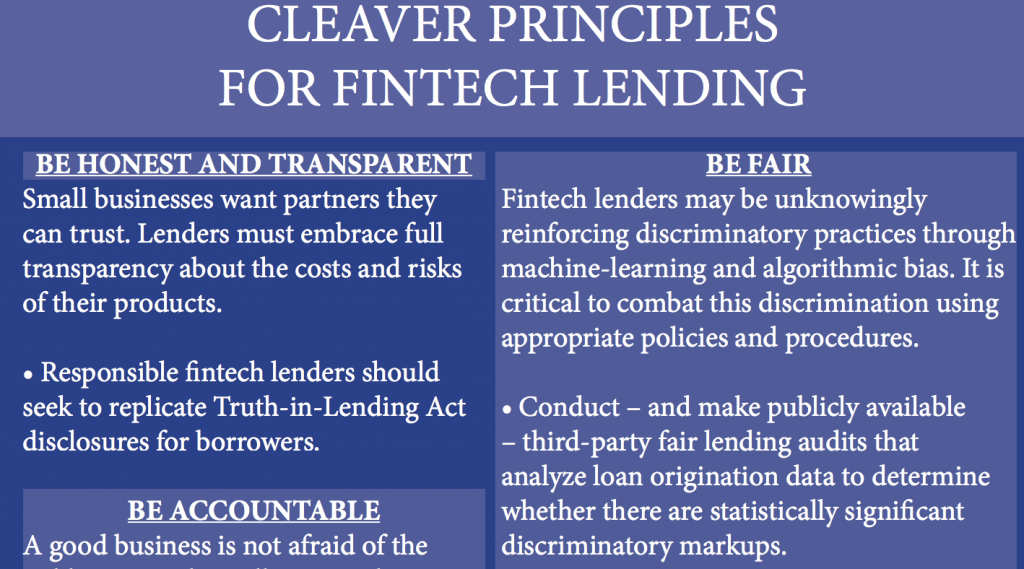 Congressman Emanuel Cleaver, II from Missouri announced findings earlier this month from a year-long inquiry he initiated into fintech small business lending practices and minorities. His initial inquiry was to determine if merchant cash advance companies had mechanisms in place to avoid discriminatory lending practices.

Cleaver concluded that some common practices in non-bank underwriting processes lend themselves to discrimination against minority business owners. One such practice is using a merchant’s personal credit score to determine a business’ credit worthiness, which the report maintains is unfair because “a personal credit score has little bearing on a business model or the owner’s business acumen, and using it unfairly punishes minority business owners who may not have had the same opportunities to build credit.” Another complaint is the common practice of having merchants sign forced arbitration clauses that forbid the borrower to take the lender to court.

The companies that he surveyed included OnDeck, Kabbage, Fora Financial, Lending Club, Biz2Credit and LendUp, even though Lendup only does consumer lending. And OnDeck, Kabbage and Lending Club don’t offer a cash advance product. Still, they make non-bank business loans.

The report also mentioned that algorithms used by some of these companies could inadvertently be discriminatory. That’s because they have the ability to incorporate the number of criminal records and bankruptcies in the merchant applicant’s zip code when making a funding decision. And these numbers tend to be higher in minority neighborhoods.

However, the report also highlighted some good practices, such as including a third party in the lending process to protect from engaging in unintentional discriminatory behavior.

“From the responses gathered,” the report reads, “it has become increasingly clear that a majority of the companies have taken some measure to prevent blatant discrimination. Nevertheless, additional protections are very much needed.”

“The initial findings are clear as day, Congressman Cleaver said in a statement about the report. “We need to further understand how lenders may be intentionally or unintentionally offering higher interest rates to minorities and underserved communities, and work to implement industry-wide best practices.”