A Dialogue with Peter Renton: Cryptocurrency and Beyond 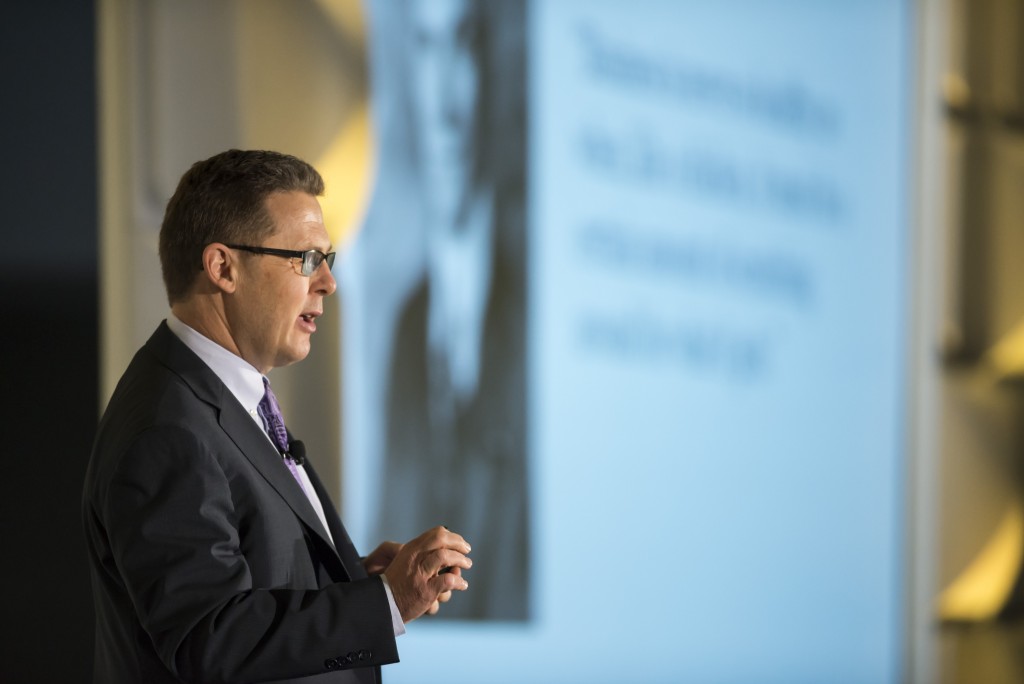 deBanked Magazine recently caught up with Peter Renton, founder of Lend Academy, a leading educational resource for the marketplace industry. Through his writing, podcasts and video courses, he’s been helping multitudes of people better understand the industry since 2010. Renton is also the co-founder of LendIt, one of the world’s largest fintech conventions, which recently branched out beyond its marketplace lending focus to include other types of fintech. The flagship U.S. conference will take place April 9 through April 11 in San Francisco. The following is an edited transcript of our discussions.

deBanked: Why did you decide to rebrand LendIt as LendItFintech?

Renton: The main reason is that we have moved beyond the online lending space. While it’s still the core of what we do, it’s not all of what we do anymore. Many of the large online lenders have also moved beyond online lending. Lending is part of financial services, but our attendees want to know what else is important. Our attendees also want to look at other opportunities for expansion. They want to know how other areas of fintech are going to affect their business—topics such as blockchain and digital banking. LendItFintech tells people that lending is what we focus on, but it also makes clear that we’re about more than lending.

deBanked: In addition to your marketplace lending investments, you entered into the cryptocurrency space back in early 2015. Tell us what you’re doing now with respect to cryptocurrency?

Renton: This was not something that I spent much time thinking about back then. At the time, I expected bitcoin to never amount to anything. But I’m interested in financial innovation and I decided to give it a go. I never thought in my wildest dreams that it would get to $10,000. (Editor’s note: In 2017, bitcoin climbed to nearly $20,000; in early February it fell below $8,000 for the first time since Nov. 2017)

I opened up a Coinbase account with $2,000, which got me 10 bitcoins. I have since sold a portion of it gradually as the price of bitcoin went up, and I diversified into a handful of other coins as well. I have recently moved a significant portion of my investment into a privately managed cryptocurrency fund, and I still maintain my Coinbase account too.

deBanked: How are things different now than when you first entered the digital currency market?

Renton: In January 2015, I created my bitcoin account and I don’t think I ever logged in over the next 18 months, or if I did, it was maybe just once or twice. No one was talking about bitcoin back then. It was still on the fringe of fintech. Sure, there were some people focused on it, but it wasn’t part of mainstream media coverage. Then, all of a sudden, it became hot because people love get-rich-quick schemes and hearing about people who hit the big time from nothing. These stories really fuel people’s imagination. Then suddenly bitcoin became one of the biggest phenomena of 2017; no one would have predicted a few years ago that would happen.

deBanked: What are the biggest risks you see with cryptocurrency today and how can investors best overcome these challenges?

Renton: Many people are buying purely on speculation with no thought that bitcoin could go down in price. You hear of people buying bitcoin on their credit card and paying 20 percent interest on that purchase. It’s insane. I feel that cryptocurrencies are here to stay, but I don’t like that they have these massive 20 percent to 30 percent swings in a day. The speculators have helped drive the price up, but they’ve also driven the volatility up and that’s been a bad thing.

deBanked: Do you think cryptocurrency will ever dethrone cash? If so, what will it take to get to that point?

Renton: I feel that some kind of digital currency is inevitable—but whether it’s a Federal Reserve-backed currency or something else remains to be seen. I have an 11-year-old and a 9-year-old and I am confident that at some point in their lifetime there will be no such thing as cash. In China, for example, there are some places where you can’t even use cash. You can go to a street vendor and buy a piece of fruit with your phone. Certainly in the U.S. we’re not there yet, but I think China shows where we are going to be.

Cryptocurrency is only one type of digital cash, and it’s hard to say how it will ultimately fit into the larger picture. To dethrone cash as we know it today, cryptocurrency needs to be a quick and efficient way of transacting, and right now it’s not quick and it’s not cheap.

Renton: Right now bitcoin is not systemically important. At a market cap of around $156 billion in early February, if something happens and it completely crashes, it won’t make a dent on the U.S. or world economy. But if bitcoin continues to rise and reaches a market cap of say $16 trillion, and then it falls to zero, that would reverberate around the world. The largest economies that have the most bitcoin would be the most impacted.

At some point governments will step in with regulation. It’s already happening in places like China and South Korea and there are rumors of other governments taking action. I don’t think the largest governments will allow their economy to be at the whim of speculators.

deBanked:deBanked: How do you feel about the SEC stepping into regulate ICOs? Is this necessary to protect investors?

Renton: There are certainly some ICOs that are complete scams while others are obviously violating securities laws. But many ICOs have strong legal teams supporting them and are doing it right now. The SEC should absolutely clamp down on those doing the wrong thing, but my hope is that they don’t overreact and throw the baby out with the bathwater.

deBanked: What about online lending? The industry has gone through a lot of changes in its relatively short history. How do you expect to see the competitive landscape change in the next year or so? What about farther out?

Renton: The online lending space has gone through a lot of changes in its short history. I feel like the biggest trend we’re seeing right now is banks launching their own platforms. Take Goldman Sachs with the Marcus online lending platform, for example. More than anything else that has happened in the history of online lending that is among the most telling for the future, I think. Goldman has gone all in with this effort, and that move woke up all the large banks. Top banks like PNC and Barclays are also launching their own initiatives instead of partnering with others, which was surprising to me. I would have thought there would be more partnerships. There are still some, but several banks have decided to do it themselves rather than partnering. Smaller banks, however, that want to get into the space, will likely partner because they can’t afford to do it themselves. While we have seen a few partnerships develop, I expect we will see many more over the next couple of years.

deBanked: What do you see as the biggest risks for online lenders today? How can they best overcome these challenges?

Renton: As an industry, we have to focus on profitability. Profitability comes down primarily to two things. First, you have to get your cost of acquisition down. Some of the companies that failed recently were never able to get their costs of acquisition down to a manageable level. Underwriting is the second piece. Particularly if you’re a balance sheet lender and you’re not underwriting well, you can’t make money. The pullback in the industry in 2016 occurred because many of the major platforms got a little too aggressive in their underwriting. Investors are still paying for some of those mistakes.

Successful companies are ones that have figured out how to profitably acquire customers and how to underwrite effectively. Most of them have learned their lesson, but in business companies sometimes have short memories. We need to keep a close eye on it.

deBanked: What advice do you have for alternative lenders and funders?

Renton: In addition to paying careful attention to profitability and underwriting, another important piece is having diversified funding sources. You want to make sure that you don’t have one big bank or some other source providing 90 percent of your funding. You should really have different kinds of lending sources. Some loans you can fund through a marketplace, some loans you can fund through your balance sheet. It’s good when you’re not reliant on one particular way of funding your loans.

deBanked: How is regulation likely to impact the online lending industry?

Renton: Having support in Congress for the online lending space is important. Congress hasn’t devoted a lot of attention to it in the past few years, but it’s starting to. The Madden decision—which has the potential to lead to significant nationwide changes in consumer and commercial lending by non-bank entities—has created uncertainty in the industry. In states affected by the decision (Connecticut, New York and Vermont) already there has been less access to credit. I’m hopeful that Congress moves ahead with legislation to override the Madden decision that’s having such an impact in the Second Circuit states. People are worried that it could expand nationwide and Congress needs to act so there’s clarification. There’s too much uncertainty right now.

deBanked: Several platforms have closed their doors in the past year or so. Do you expect to see this trend continue?

Renton: There are companies out there still trying to raise money and struggling to do so. That’s a healthy thing for an industry. You want the strong players to survive and thrive and for the weaker ones to go away.

deBanked: How big do you think an online lender has to be to thrive?

Renton: There’s no doubt that scale is important. If you’re a small player, you have to have some kind of niche in order to acquire customers. If you have that, you have the ability to compete. Even with that sometimes, it’s going to be difficult. It’s a pretty complex business. You need to have a lot of staff for compliance and operations and that can be expensive. When you have high fixed costs, you have to have scale to be able to make a profit. That said, I think there’s room for more than just the ultra-large players in the online lending space. I think there will be plenty of opportunity for strong, well-positioned medium-sized players to compete.

deBanked: What about M&A in the industry?

Renton: Valuations at many of the large platforms are way down from where they were several years ago. As long as valuations stay depressed, I think we could see a big acquisition of a major platform this year. Some of these platforms have millions of customers. Having the ability to pick up such a large number of customers instantly through an acquisition could be compelling for the right buyer, such as a large bank.

deBanked: Is this a good time or a bad time to be an online lender in your opinion?

Renton: It is still a good time to be an online lender. We are expanding access to credit and making the world a better place. I have never been more excited about the industry than I am today.

Home › cryptocurrency, Fintech, Online Lending › A Dialogue with Peter Renton: Cryptocurrency and Beyond