A Decade of Funding

Happy double anniversary to me

Next month is my 9 year anniversary in the merchant cash advance industry, which means I’ll be starting my 10th year. A decade of merchant cash advance… holy shit. I’ve had the opportunity to view it from many different angles and have accrued my fair share of adventures, plenty of which I’ve written about and others I’ll have to take to my grave. 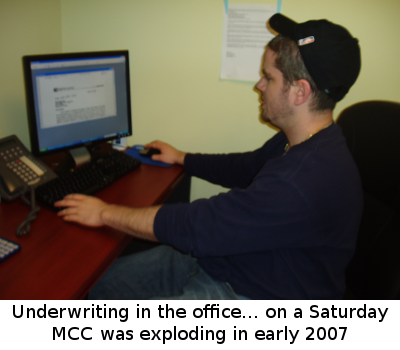 I also launched this very website exactly 5-years ago under its original name MerchantProcessingResource.com. Not many people can say they’ve authored more than 600 stories (yes, seriously) on merchant cash advance, but I can. I’m fortunate to have turned something I merely enjoyed in the beginning into a business of its own.

Looking back now, there weren’t many people keeping a live diary of events as the industry dove headfirst into the financial crisis. Who would’ve bothered to report on an industry that was arguably made up of only a thousand people?

In April 2009, even before deBanked launched, I submitted a story to the only merchant cash advance magazine of its kind. It didn’t have a very clever name, just Merchant Cash Advance Publication. My story, titled, An Underwriter in Salesman’s Clothing, rambled on about the end of the industry’s glory days, the wave of declined deals in the recession, and how funders should be more appreciative of ISOs. 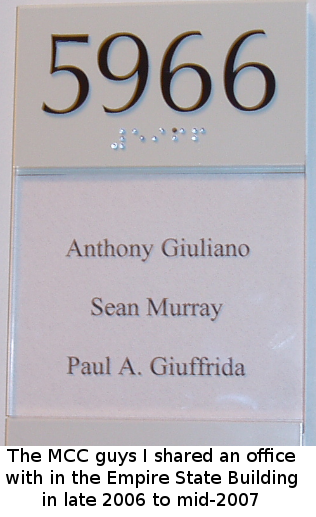 Here’s a summary of what I wrote more than six years ago:
I was complaining about stacking as far back as 2007 apparently. I addressed it as a merchant problem. Merchants were taking advantage of funders, not the other way around like some frame the argument in 2015.

I left my post as Director of Underwriting in late 2008 because “I wanted the ringing phones, the commotion, the markerboards with stats, the glory, the $20,000 [monthly] checks.”

Funding companies became super conservative during the financial crisis and all my deals were being killed (25 deals declined in a row at one point.)

I had recently charged my first closing fee, felt bad about it, and got in trouble for it.

I said 1.40 factor rates wouldn’t last (I was wrong about this!)

I bitched about algorithmic declines (I apparently thought computers underwriting files was a good way to upset ISOs.)

I acknowledged my own hypocrisy when I realized how hard it was to be a sales rep after thinking sales reps were overpaid and overrated in my previous years as an underwriter.

I continued on as a sales rep for another two and a half years after I wrote that. That means that in 2010 when I started deBanked, I was still calling UCCs, closing deals and boarding merchant accounts while sitting in a windowless room rented by a startup ISO. 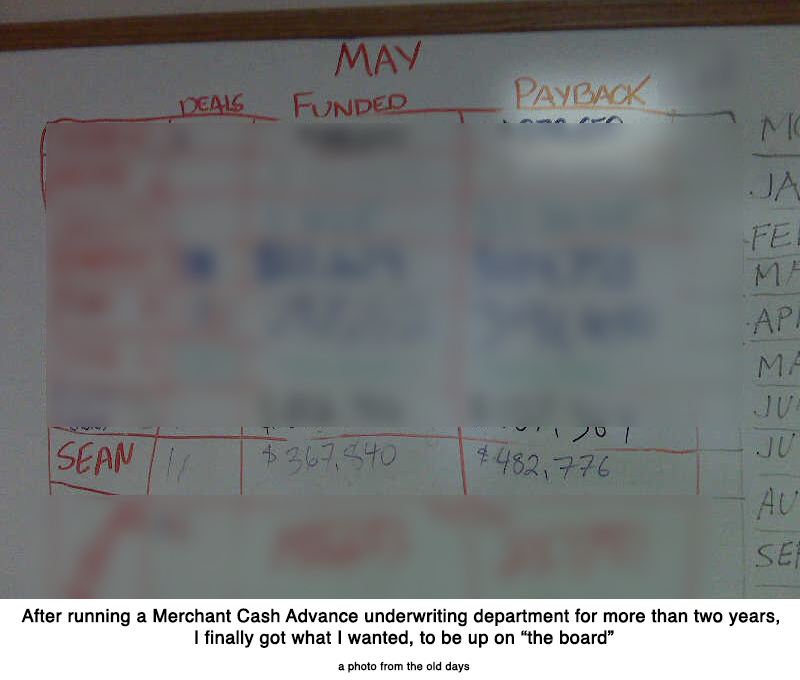 But what was there to blog about in 2010? Oh little stuff like who the biggest funding companies were at the time by checking UCC filings since almost everyone filed UCCs back then. Notably, the third largest merchant cash advance company of 2010, First Funds, is no longer in business. 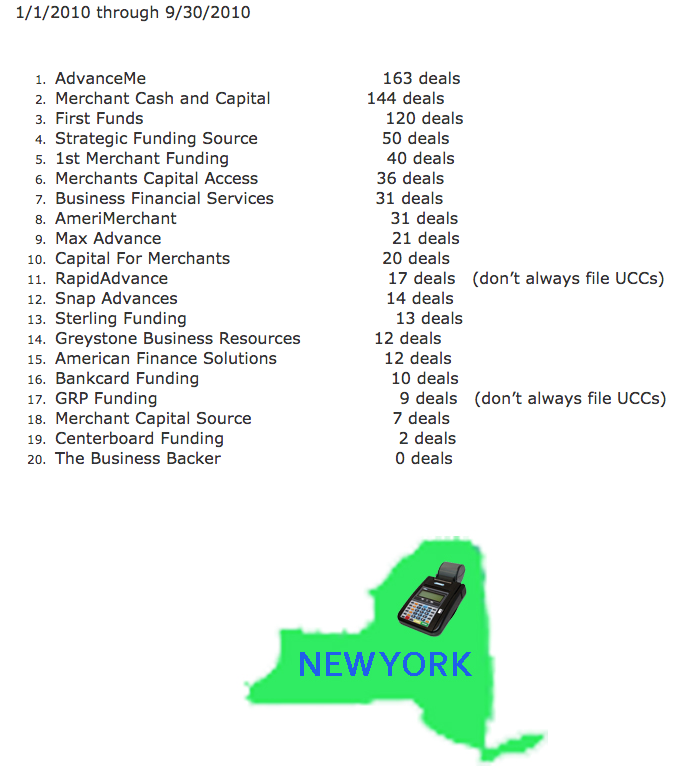 I also wrote about shopping deals around and the impact that might have on a merchant’s credit report. That was the day-to-day stuff though, information I was just putting out there hoping someone on the Internet might see it. What got everyone excited was the 2010 New York State leaderboard which eventually prompted me to spend my nights and weekends investigating the industry on a wider level. 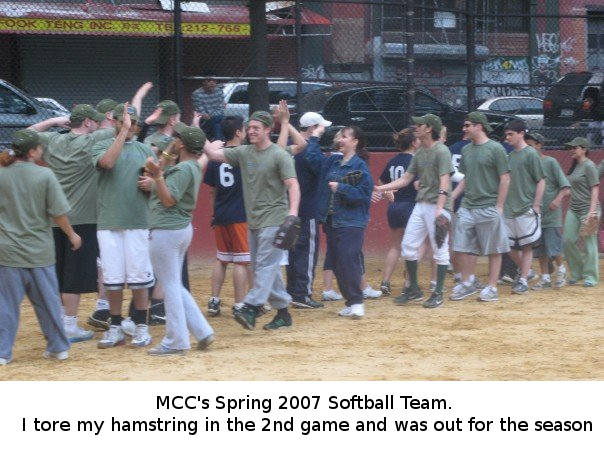 I began talking to people at other funding companies about their monthly numbers. It wasn’t that hard to get information as an industry insider, especially if you had deals to send somebody’s way. I also spent money to acquire secured party lists to count the number of UCC filings by funders in all 50 states rather than just look at one free state like I did with New York originally. I think I was the only person in the industry at the time running up their personal credit card bill to conduct such research. I had also been in the industry for four years at that point and had a great network of contacts who could clue me in on their volume.

While I said that I also looked at census records and department of labor records, I’ll admit that data wasn’t extremely useful. The end result was a best guess estimate that in 2010, there were approximately 21,000 merchant cash advances transacted for $524 million.

My data would go on to be republished in ISO&Agent Magazine, The Scotsman Guide, and Leasing News, and also end up in many other places I didn’t expect, like in the business plans of merchant cash advance companies that were looking to raise capital. In fact, in a private meeting I had with an MCA company months later in South Florida, the CEO let me take a peek at the docs they had just submitted to a bank for a credit facility. Included was a printout of these numbers with my name on it and all. Apparently there was something to this writing thing…

My last day as a sales rep was in the Fall of 2011. I left the commission-only life (oh what, you 2015 pansy closers actually get a base salary?) for something even more risky, an entrepreneurial life. For a couple years, I played underwriting consultant to a handful of merchant cash advance companies and industry expert to institutional investors interested in the space. I learned how to code in my spare time and spent more than a year in online lead generation.

Along the way I’ve visited the offices of dozens of ISOs and funders, syndicated in deals, and test-drove new technology.

None of this makes me particularly special, especially when I hear about how much some of my old sales buddies are making these days on deals. “Are you SURE you don’t want to come back?” they ask. It’s enticing no doubt. A part of me wants to grab the phone out of their hand and attempt to shatter their record on the markerboard this month even though I’m pretty sure I’m rusty as hell.

One thing noticeable between now and 9-years ago is that my hair turned grey. This industry will do that to you (or at least it did to me.) And I still get a kick out of meeting folks who got into the industry years before I did. The 90s/early 2000s AdvanceMe crowd likes to tell me that they were funding merchants while I was still in diapers. They are practically right.

As I enter my own tenth year in the biz however, it’s exciting to think that the industry is just now getting started. OnDeck was the first IPO in the space and the general public is learning about short term business funding for the first time. There’s no shortage of news to report and that keeps me plenty busy these days.

And so even after a decade of MCA, it’s never too late to put on your Funded pants. Opportunity awaits and I hope you’ll continue to ride the wave with me. Thanks for reading since 2010! 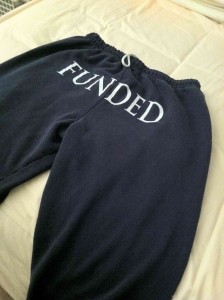