Getting in on the ONDK and LC IPO


According to Investopedia, “Getting a piece of a hot IPO is very difficult, if not impossible.”

If the bankers think a stock will soar, they earmark much of the shares for their favorite institutional clients (ones that bring in the most in commissions). In a sense, brokerages use lucrative IPOs to curry favor with big clients, to win and retain their business. When brokers aren’t so confident about the company’s prospects, they will try to sell the stock to less-favored institutional clients.

Admittedly these are generalities, not unyielding truths.

But when Lending Club mass e-mailed all their platform lenders on November 17th that they would be rewarded with a chance to get in on the IPO, people got excited. They wouldn’t just automatically get stock though, they’d be given the chance to buy it. An allocation was not guaranteed and a limit as to how much was not immediately disclosed, though it was recently revealed that platform lenders could buy up to a maximum of 350 shares. 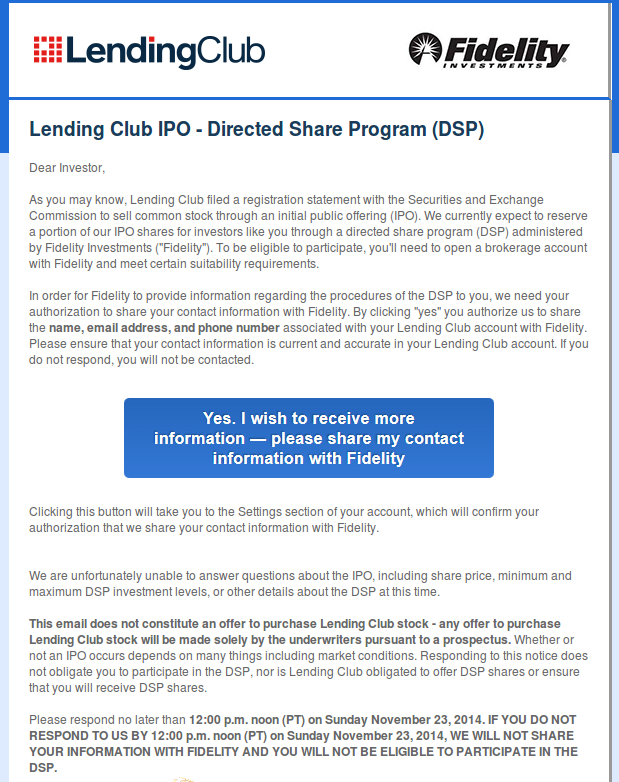 I got the offer and turned it down. I’m very bullish on Lending Club stock but I feel like I’m already invested enough in them as a company through platform lending to need to get even more in. For those not sure how Lending Club really works, their system is not actually peer-to-peer. Investors buy Lending Club notes that are tied to the loans they issue. You are ultimately only investing in Lending Club with every note you buy. You have no relationship or claim to the borrower.

With that being the case, my tens of thousands invested in them is enough, especially from a retail investment standpoint. But I enjoyed the proposal nonetheless because it felt like a gift for getting in on the ground floor of something huge.

I also liked telling people over the last two weeks that I could get in on the Lending Club IPO.

“You hear about Lending Club going public?” I’d ask a friend. And then brag, “Yeah, well I have a chance to get in on the IPO if I want. I could talk to my guy to try to get you in but I don’t know if I can swing it. Maybe though.”

I was pretty damn important.

Until someone told me they could get in on the OnDeck IPO today. He apparently had an inside guy and that inside guy was E*Trade, as in he could apparently get in on OnDeck’s IPO just for having an E*Trade account. 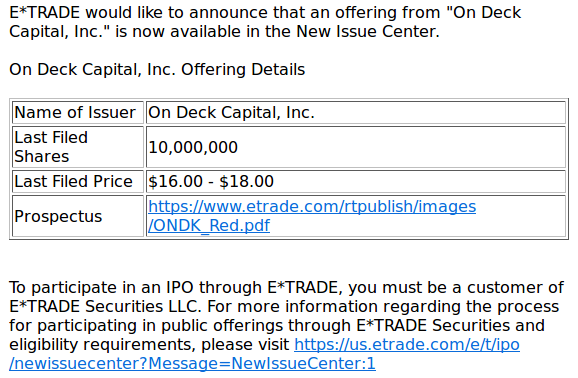 One had to wonder why any schmo with a brokerage account was being asked to buy in. It didn’t sound good for OnDeck but I let my friend have his moment. His guy could try to get me in, etc.

The mass blanket invitation to get in might appear that brokers aren’t so confident about the company’s prospects. But actually back in January of this year E*Trade forged a “retail alliance” with middle-market investment bank Jefferies LLC. A Reuter’s story said that, “E*Trade is betting that it can score points with investors by guaranteeing access to IPOs that brokerage firms normally reserve for their best customers.”

OnDeck’s underwriters include Morgan Stanley, Bank of America Merrill Lynch, JPMorgan Chase, Deutsche Bank and Jefferies. This is in line with “giving its customers access to initial public offerings and follow-on offerings underwritten by middle-market investment bank Jefferies LLC” though I haven’t confirmed the alliance is the cause of this.

Just as with Lending Club’s allocation offer, no one is guaranteed anything with OnDeck through E*Trade. There’s a required approval process which may ultimately yield nothing.

And yet it still feels a little weird, maybe because I’ve been hearing about an OnDeck IPO for years now and I just can’t grasp it’s actually happening. It’s one thing for a big banker to talk about it and another for an old college buddy, my doorman, and Jim who’s the cashier at the local hardware store ask me if I know anything about this OnDeck loan stock advance thing they heard about.

All I know is that sentiment on them is mixed but that ultimately insiders believe it’s great for the industry.

As for both of these the IPOs? I don’t know. I’m not getting in on either of them but it has nothing to do with how I feel about the companies. I can’t wait to watch this all unfold though.

Check out the 224 page OnDeck Prospectus!

Home › Loans, MPR Authored, p2p lending, Stocks › Getting in on the ONDK and LC IPO