A Drone Flew Through The Office of a Collections Company

Dedicated Commercial Recovery combined modern tech and marketing, as the company released a live action virtual tour of their new offices via drone on Tuesday. The video showcased staff working in an upbeat, positive, one might dare say fun, environment.

The YouTube video is now the company’s most ever watched on their channel.

“We shot that video like eight times,” said Shawn Smith, Chairman and CEO of Dedicated Commercial Recovery. “It was such a cool concept, a way to showcase the new office,” he said.

Smith said the goal of the video was to show that his company’s staff was more than just debt collectors. “We want to show the outside world our culture,” said Smith. “Our team loved it.”

Filmed by Sky Candy Studios, drone marketing is an emerging concept in the world of promoting business.

Smith, who sits on several non-profit boards, wants to use the concept of drone marketing in his ventures outside of his collections company too. “I’m going to talk to the boards and associations I’m a part of, we would love to shoot events [this] way,” said Smith.

The video was also dedicated to the passing of a recent employee of Smith’s. Aubin Davis passed in mid-July and was commemorated at the conclusion of the video. “He was an industry veteran,” said Smith. “We wanted to honor him.” 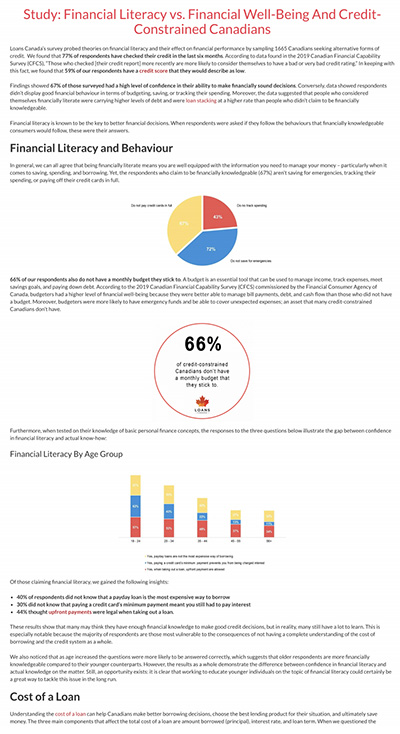 This week Loans Canada, a lead generation company, released a study documenting the disparities between perceived financial literacy and actual financial well-being. Surveying 1,665 Canadians, the report asserts that those individuals who claim to have a firm grasp of their financial situation may in fact be out of touch.

This being highlighted by major misunderstandings about how to budget for the future as well as a lack of education regarding loan repayments. 72% of the respondents said that they did not save for emergencies, 43% did not track their spending, and 66% do not stick to a monthly budget. Such budgetary omissions outline the potential for a large portion of the Canadian market to be in trouble should unforeseen expenses arise, and the fact that two thirds of the market aren’t even drawing up budgets is a cause for concern.

Such factors are made worse by the community’s seeming misinterpretations of loan terms. With 40% of the survey stating that they didn’t know payday loans were one of the most expensive ways to borrow money, 30% not understanding that paying the minimum amount of a credit card charge still meant you had to pay interest, and just over half of those surveyed were not able to identify the factors which affect the cost of loans, there appears to be a problem surrounding financial literacy and education of individuals regarding loans.

As well as these issues, there is the case of stacking loans, with the study indicating that the practice is not fully understood by Canadians and that the two top reasons for taking on multiple loans are for emergency costs (25%) and making ends meet (43%). Interestingly, the respondents who claimed to have the most confidence in their capacity to make financially sound decisions are more likely to be individuals who stack loans, leading them, inevitably, to have similar or more debt than those surveyed who said they were not confident in their financial decision-making ability.

Altogether, the study paints the picture of Canada as a market in need of further education. While financial literacy isn’t in crisis, the report points towards vulnerable sectors, such as such as those individuals with poor knowledge of loans and interest rates, as well as budgeting, are groups that need to develop a better understanding.

TBF closed transactions in December totaling $100 million. The three largest deals were with a leading e-commerce company that acquired and liquidated a merchant cash advance business; a captive leasing company that provides financing for transportation equipment and other assets; and one of the 20 largest banks in the nation.

“One reason for the rise in commercial debt selling is the tremendous growth of online alternative lenders,” he explains. “As their business originations have increased, so have the number of accounts that eventually default. By selling commercial debt at charge-off instead of spending years trying to collect it, they can put that money back into making loans and merchant cash advances where they generate a much better return.”

“Other lenders and lessors also recognize that it is more productive to concentrate on their core business rather than chase collections past charge-off,” he adds. “Selling commercial debt provides immediate cash and allows collections personnel to focus on accounts that are more likely to be recovered, earlier in the past-due cycle.”

While the December deals may additionally reflect the eagerness of companies to bring in cash before year’s end, Boehm says prospective deals in the pipeline remain high in January, and he anticipates a busy first quarter 2020.

TBF Financial is the leading purchaser of non-performing equipment leases, commercial bank loans, online small business loans and merchant cash advances in the U.S. Founded in 1998, the company buys commercial accounts up to four years old from the date of last payment. This includes equipment leases, loans and lines of credit that have personal guarantees, no personal guarantees, are secured, unsecured, pre-agency, post-agency, pre-litigation, and reduced to judgment. For more information, visit tbfgroup.com or contact Brett Boehm, CEO at bboehm@tbfgroup.com, 847-267-0660 or via LinkedIn.