So We Didn’t Buy The Constitution 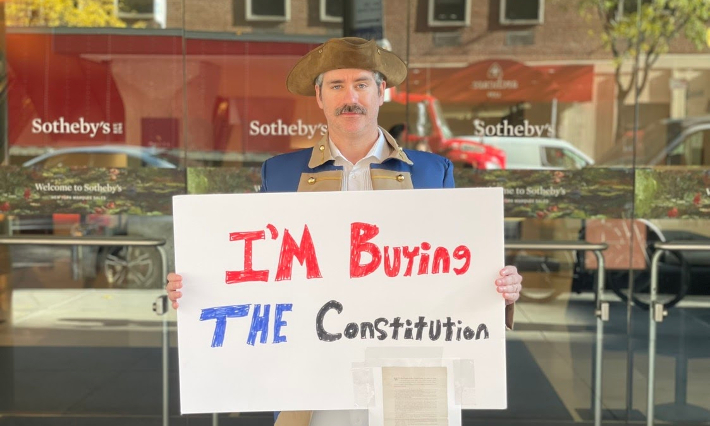 An internet movement started last week to buy one of the only remaining original copies of the United States Constitution reached a roaring climax on Thursday night and then descended into chaos and confusion as almost no one seemed to know what the outcome was, how auctions work, who was bidding on the movement’s behalf, or anything at all.

Several news outlets reported that the Decentralized Autonomous Organization, aka DAO (pronounced “Dow”), representing the internet movement, had won, including the crypto-focused outlet Coindesk. The DAO raised approximately $47 million via ethereum contributions in a matter of just days from a total of more than 17,437 people who joined in (yours truly included). Knowing that, most people were lured into believing that the winning bid of $43.2 million had to have been the DAO. Unfortunately, the contributors seemed largely unaware of the hefty fees charged on top by Sotheby’s, the 8.875% sales tax, and more. I wrote about this two days prior.

This snafu seems to have been expected by those skeptical of an internet movement. Having actually stood outside of Sotheby’s earlier in the day in full George Washington-esque garb, I was asked by someone seemingly connected to a bidder if the DAO was aware of the added fees. I told them what I knew, but I couldn’t speak in the affirmative for the other 17,436 people.

Having also crossed paths with Julian Weisser, however, a Core team member and nice fellow, it was clear that he was extremely knowledgeable about all the details involved. Weisser was also the first team member to officially announce the loss on the discord.

“@everyone – We did not win the bid for the copy of the U.S. constitution.

While this wasn’t the outcome we hoped for, we still made history tonight with ConstitutionDAO. This is the largest crowdfund for a physical object that we are aware of—crypto or fiat. We are so incredibly grateful to have done this together with you all and are still in shock that we even got this far.

Sotheby’s has never worked with a DAO community before. We broke records for the most money crowdfunded in less than 72 hours. We have educated an entire cohort of people around the world – from museum curators and art directors to our grandmothers asking us what eth is when they read about us in the news – about the possibilities of web3. And, on the flip side, many of you have learned about what it means to steward an asset like the U.S. constitution across museums and collections, or watched an art auction for the first time.

We had 17,437 donors, with a median donation size of $206.26. A significant percentage of these donations came from wallets that were initialized for the first time.

You will be able to get a refund of your pro rata amount (effectively minus gas fees) through Juicebox. Please expect more details from us about this tomorrow – our team has not slept in the past week, and we are giving people the night to get some rest before we’re back at it tomorrow AM.

Every one of you were a part of this. We want to also thank our partners in this work: Alameda Research, Endoament, FTX US, Juicebox, Morning Brew, and SyndicateDAO” 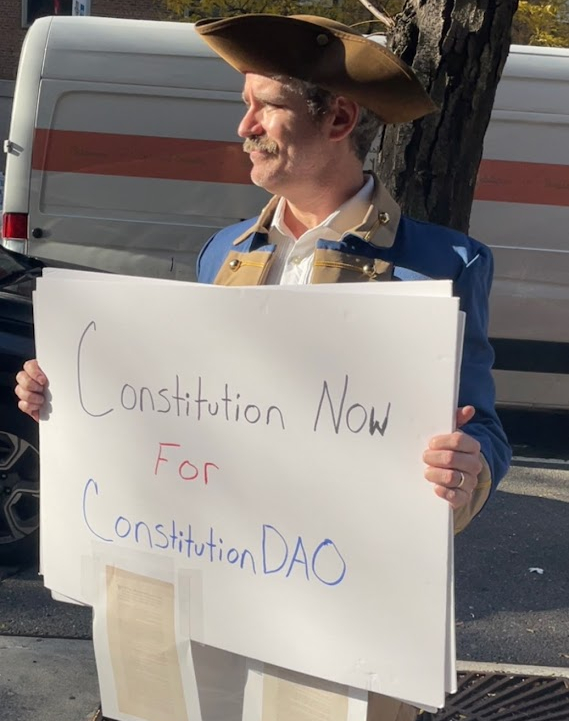 Once the results finally started to kick in, feelings were mixed. Discord members were torn between feeling completely bamboozled or excited to use a DAO to make some other kind of meaningful purchase. The leadership behind the organization’s official twitter account signed off for the night early after working around the clock for about a week to even put the entire thing together.

gn everyone we’ll be back tomorrow

thanks for all your love and support. can’t wait to shape the next leg of this journey with you all 🙂 🌙 📜 https://t.co/Vhtiglpntg

By any measure, the dollars involved were astounding. This particular copy of the Constitution last sold in 1988 for the price of $165,000. Sotheby’s pegged the current value at $15 – $20 million. With $47 million in hand, winning seemed a strong possibility. The one major problem, however, is that with the blockchain being a public ledger, the rival bidder already knew the DAO’s best bid.

Overall, it was a rather strange experience, no doubt made more unusual by my throwing down eth and then donning a costume on the Upper East Side of Manhattan to the bewilderment of many locals.

Was this ultimately a loss for crypto or still a win? Only time will tell…

Home › cryptocurrency, NFTs › So We Didn’t Buy The Constitution