Banks, Non-Banks, Fintech and More Came Through for Lendio on PPP, But it Wasn’t Easy 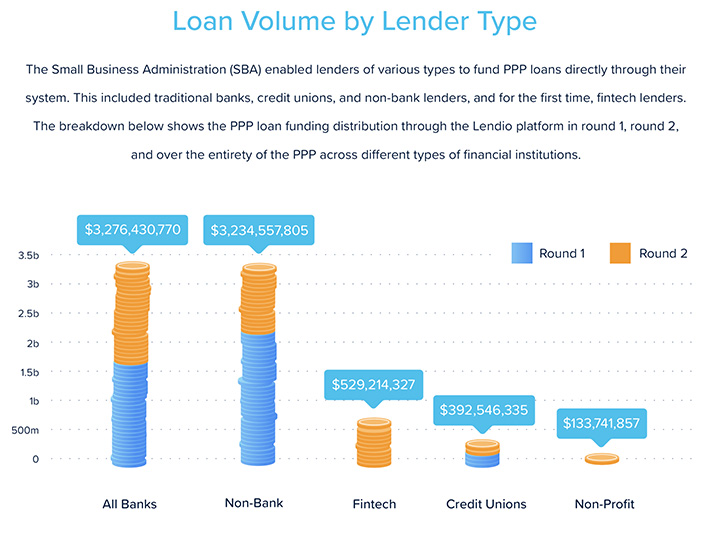 Last week, Lendio, a facilitator of small business loans, released a report analyzing the $8 billion of PPP loans that were approved through its lending platform. A coalition of more than 300 lenders was able to give aid, saving an estimated 1.1 million jobs, Lendio indicates.

Through Lendio’s service, traditional banks approved the most funding at $3.3 billion- or about 44% of the PPP dollars on the platform. Though non-bank lenders secured the highest number of approvals at 50,264 transactions in lesser dollar amounts.

Fintech lenders funded 6% of the total loan volume through the platform.

Lendio was well situated to facilitate lending from institutions to those that needed help through funds provided by the SBA. Brock Blake, CEO, and co-founder of Lendio, said the company’s success in delivering on PPP was no accident— they had to remove all stops and almost bet on the success of the PPP program.

Blake said while other companies were closing their doors and sending off employees on furlough, Lendio took on 250 new hires- and buckled down for thousands of hours of engineering work to overhaul their system. Not just loan sales, but legal processes, onboarding, training, and backend tech work had to be updated in just days.

This all came on fast, but so did the quarantine. Beginning in April, more than 100,000 business owners applied for economic relief under the PPP using Lendio’s online marketplace.

The demand for capital was outrageous.

“It was more demand in one weekend than the SBA had seen in the last 14 years combined,” Blake said. “We were helping these business owners that were watching their entire lifes’ work flushed down the drain in a matter of weeks, and they were desperate for capital.”

“OUR SYSTEMS WERE TESTED TO THEIR LIMITS”

Lendio was finding that many institutions could simply not handle the volume, Blake said, and he knew if banks were only able to process loan requests for their current customers, there would be an exploding demand for loan processing. The company took on 100 new partners who needed help during this time.

“Our systems were tested to their limits, like 1000 times more pressure than we ever saw before,” Blake said. “Some partners of ours got so much demand they couldn’t handle it and turned off their spigot. So we scrambled to find lenders that would take on new customers.”

Though it was ten times more challenging than anything Blake has done in his career, it was ten times more satisfying. Lendio doubled the number of loans it has issued since 2011, and quintupled the dollar amount the platform facilitated in just four short months. Where are they going to go from here?

For one, Lendio is one company out of many that are hoping for another round of PPP funding. Blake said he is getting customer feedback all the time asking for help, dealing with quarantine regulation that is harming business, like restaurants that have nowhere to seat patrons.

Outside of PPP, Blake said that many of the 110,000 businesses they served are now applying for other loans, or using Lendio’s bookkeeping and loan forgiveness applications. Lendio is happy to help business owners and banks through this tough time by launching digital applications.

“Before, lenders across the country were requiring business owners to come into branches [with] paper applications,” Blake said. “Now, there’s not one business owner in America that wants to walk into a bank branch. The demand for lenders to go digital is as high as it’s ever been.”

Home › Business Lending, PPP › Banks, Non-Banks, Fintech and More Came Through for Lendio on PPP, But it Wasn’t Easy