The Office of the Comptroller of The Currency took a gamble with a federal judge in a lawsuit brought by the New York Department of Financial Services (DFS) and lost. On Monday, Judge Victor Marrero ruled that the OCC must “set aside” its special purpose (fintech) national bank charters entirely, not just for those with a nexus to New York.

The outcome is a byproduct of a ruling issued on May 2nd where the OCC had sought to dismiss the challenge from the onset. DFS was somewhat victorious then in that the case was allowed to proceed, be litigated, and eventually tried. But the OCC felt the case was lost before it had begun because “the Court [had already] ruled on the issue of the law at the heart of the case: whether, under the National Bank Act, OCC has the authority to issue special purpose national bank charters to financial technology companies that do not accept deposits.” 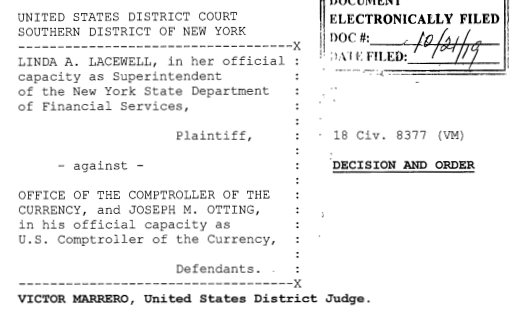 The Court made it clear, that “OCC does not have the authority because the relevant language in the National Bank Act unambiguously defines ‘the business of banking to include deposit-taking.”

As a result, OCC negotiated with DFS to reach an agreed upon final judgment in DFS’s favor. The only remaining question was to what level of defeat the OCC would concede. OCC argued a judgment should preclude only New York companies from applying for a fintech charter while the DFS argued it should apply beyond New York’s borders to all 50 states.

On Monday, the judge went with DFS’s version, pointing out that ordinarily prevailing on an Administrative Procedure Act claim, as OCC had indeed consented to judgment on, would mean that the agency’s order would be vacated, not that the plaintiff would win some special relief.

It is hereby ordered, adjudged and decreed that:
OCC’s regulation 5 C.F.R. 5.20(e)(1)(i), is set aside with respect to all fintech applicants seeking a national bank charter that do not accept deposits.

DFS Superintendent Linda A. Lacewell issued an official comment on the ruling:

This decision makes the financial well-being of consumers from New York and around the country a priority. It reflects the rational conclusion that DFS and other state banking regulators have the expertise to provide the strict supervisory oversight and enforcement of anti-money laundering and consumer protection statutes and regulations that non-depository financial service providers are required to follow. The decision stops OCC’s attempt to usurp state authority by establishing a federal fintech regulatory framework at the expense of consumers. Going forward, DFS will continue to be a fierce advocate for consumers in New York and nationwide.