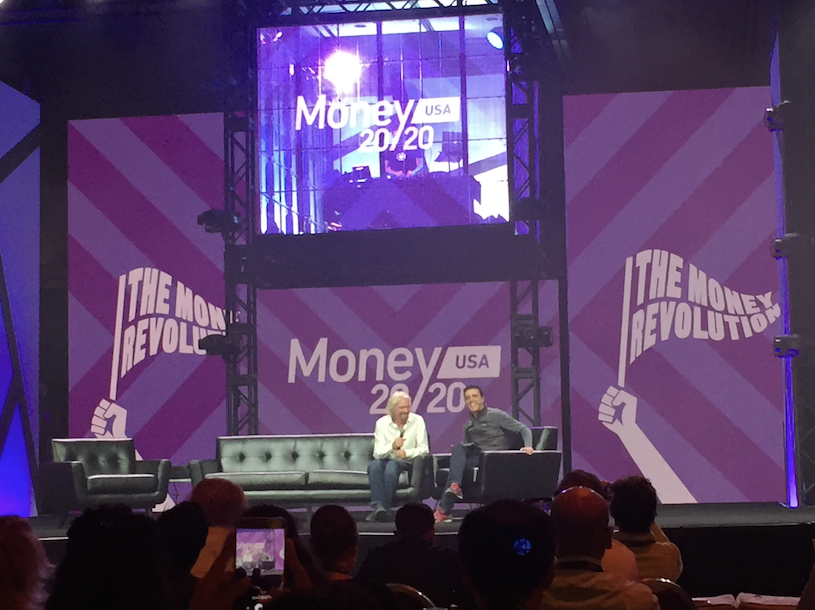 While over 20 years ago Branson founded Virgin Money, a sizable UK-based bank, he demonstrated clear discomfort and disinterest in talking about banking. When asked about finance, he said, “I brought notes,” and produced what looked like a thick chunk of papers from his pocket. When Sebastiao said, “moving out of the financial space,” Branson said “thank you!” which elicited a wave of laughter.

“I’ve seen situations in life that have frustrated me,” Branson said, and explained that Virgin Money is the result of a contract he was about to sign with a money management firm. He said that when he asked the investment firm what “bid offered 5%” meant, they got quiet. He then learned that it meant that they would take five percent of the amount he gave them before investing anything. Upset by that, he thought he could do better in financial services and he hired a banker to help launch the company.

Similarly, he said Virgin Airlines was born when he couldn’t get a flight from Puerto Rico to the Virgin Islands because the airline said there weren’t enough passengers that day. He thought he could do better.

Since he first saw a man walk on the moon, he said he always imagined that he and his family would go to the moon someday. But when he realized about 14 years ago that it didn’t look like that was going to happen, he created Virgin Galactic Airways, which is the first commercial rocket program to the moon.

“I registered Virgin Galactic Airways and Virgin Intergalactic Airways, because I’m quite an optimist,” Branson said, producing another wave of laughter.

After years of testing, in which one test pilot was killed, Branson said that he plans to go to the moon next year.

“We can’t leave it up to government to solve the world’s problems,” Branson said, conveying that businesses, small and large, must play a role in improving the world, whether it be on a local or international level.

At the close of the interview, to bring the topic back to finance, Branson said, “Hopefully I’ll learn a little more about banking for next time.”