Why Small Businesses Sought Financing in 2017, and Why They Were Denied 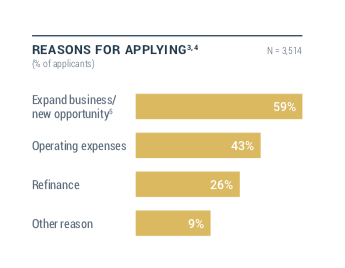 Of the reasons why merchants were denied funding, “Having insufficient credit history” ranked number one, according to the report. A very close second was “Having insufficient collateral,” followed by “Having too much debt already.” After that, in descending order, came “Low credit score,” “Weak business performance” and “Other.”

The “Having insufficient collateral” category does not apply for MCA financing, but the other categories do. According to Nick Gregory, founding partner at Central Diligence Group, which provides MCA underwriting services, “Having too much debt already” is perhaps the main reason why merchants seeking cash advances get declined.

“A lot of times the merchants are overleveraged,” Gregory said.

He explained that if a merchant also has something like two MCA arrangements (or positions) already, that merchant likely has taken on too many contractual obligations which will often be a reason to decline the application. In Gregory’s experience, another common reason for declining an MCA financing application is “Weak business performance.”

Contradictory to the Federal Reserve report’s top reason for denying financing to a small business borrower, Gregory said that “Having insufficient credit history” is seldom a reason to deny MCA financing. This disconnect likely comes from the fact that the report includes all types of small business financing, with MCA accounting for just seven percent. The number maybe seem small, but it continues to increase while small business applications for factoring have decreased.

Home › Business Lending, merchant cash advance › Why Small Businesses Sought Financing in 2017, and Why They Were Denied