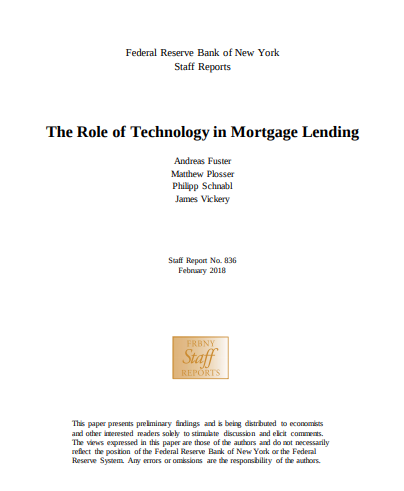 The New York Federal Reserve published the results of their study on the role of technology in mortgage lending. And they bear good news for fintech, that technological innovation has improved the efficiency of financial intermediation.

Fintech lenders, it turns out, are faster, experience lower default rates, and are more responsive to changes in demand. Faster processing times did not translate into issuing riskier loans, the report concludes.

Fintech lenders were defined as lenders that offer an application process that can be completed entirely online.

The Fed researchers also found little evidence that fintech lenders disproportionately target marginal borrowers with low access to finance. On the Contrary, the data actually shows that fintech borrowing is actually higher among those both older and more educated.

“We find that default rates on fintech mortgages are about 25% lower than those for traditional lenders, even when controlling for detailed loan characteristics,” the report says. “There is no significant difference in interest rates. These results speak against a lax screening hypothesis, and instead indicate that fintech lending technologies may help attract and screen for less risky borrowers.”

The two largest fintech mortgage originators in 2016 were Quicken Loans and loanDepot.