81% of Online Business Lending Borrowers Report Being Satisfied or Neutral


The latest Small Business Credit Survey published by the Federal Reserve shows that 81% of small business borrowers were either satisfied or neutral about their online loan experience. Online lenders were defined as nonbank alternative and marketplace lenders, including Lending Club, OnDeck, CAN Capital, and PayPal Working Capital. 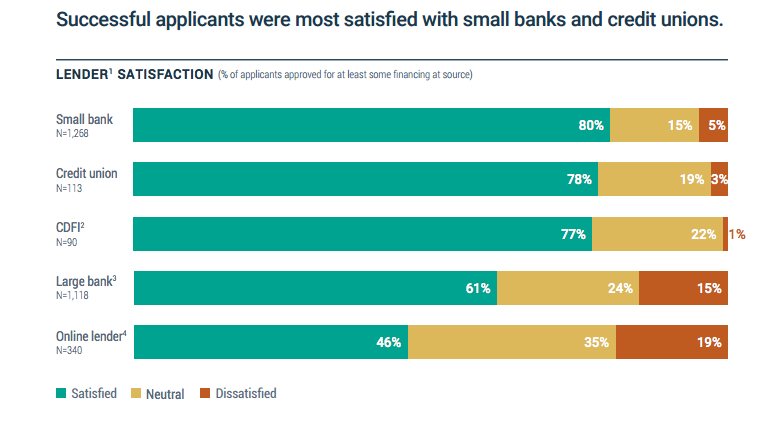 While these charts indicate that there is still room for online lenders to improve, the 2016 report paints a more honest narrative than last year. Last year’s report used net satisfaction scores, which measured the difference between satisfied and dissatisfied borrowers. That methodology resulted in 15% net satisfaction for online lenders in 2015, which unless you read the fine print, easily misled even the most sophisticated of readers to conclude that only 15% of borrowers were satisfied. (Those readers included experts testifying in congressional hearings, the media, and government agencies, all of whom relied on that report to argue that online borrowers were terribly dissatisfied).

The 2016 report shows that businesses borrowing from an online lender were only slightly more likely to be dissatisfied than those that borrowed from a large bank (19% vs. 15%). And it’s the high interest rates that stand out to those dissatisfied online borrowers. 33% said that a high interest rate was the reason for their dissatisfaction. This is to be expected since non-banks inherently suffer from a higher cost of capital than banks.

Cash Advances?
Unfortunately, all of their data on “cash advances” is tainted. If they meant “merchant cash advances” or sales of future receivables, they should’ve specified such in the survey that went out to small businesses. Instead, the survey repeatedly asked about cash advances, a term most commonly associated with borrowing money through an ATM with a credit card. Those surveyed were also asked if they used personal loans, auto loans or mortgages so the multiple choice context suggests a credit card cash advance. Similarly, a cash advance could also mean a payday loan. With so many interpretations, the consequence is that it’s impossible to tell what the Federal Reserve meant or what those being surveyed thought they were being asked.

Statistically representative?
The 2016 report also spends more time defending the Fed’s sampling methodology. Perhaps they are aware that their data is being put under the microscope.