Confidence in the industry’s continued success was down among small business financing CEOs in the third quarter, according to the latest survey conducted by Bryant Park Capital and deBanked. At 75.8%, it’s the lowest level recorded since surveying began late last year. 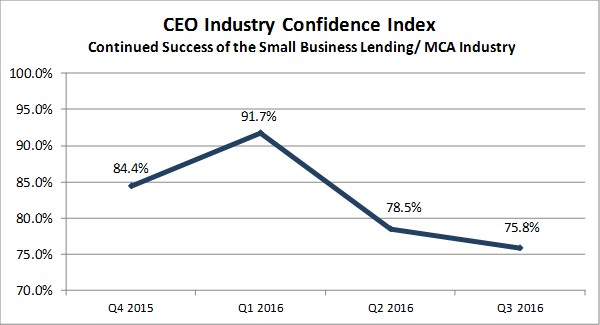 Respondents were not asked the reasoning for their confidence score, but the sentiment may have been influenced by what seemed like an impending Clinton presidency at the time and the 4 more years of regulatory pressure on financial services that would’ve continued as a result. The survey was conducted before the election. Also, the correction taking place in the consumer space with companies like Prosper and Avant have allowed a general feeling of pessimism to waft through the alternative financing universe.

Still, at 75.8%, which is still well into positive territory, the mood is probably best described as cautiously optimistic. The euphoria in Q1 at 91.7%, preceded the resignation of Lending Club’s founder and CEO, which symbolically burst alternative lending’s bubble.

Curiously, industry CEOs were slightly more confident in their ability to access capital needed to grow their business. Respondents were not asked what their capital source options were or the respective costs, but it signals that there are still plenty of investors interested in the space. 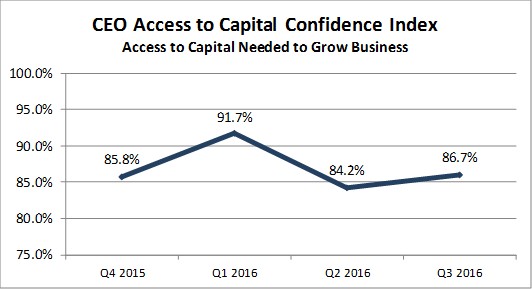 Bryant Park Capital and deBanked also produce a comprehensive full-year industry report, available to anyone for $495. To purchase the 2015 report, you can contact me at sean@debanked.com Last modified: December 18, 2016