Prosper Marketplace Inc. reported a Q2 2016 loss of $35.5 million, down from a loss of only $6 million over the same period last year. While not publicly traded, the company is still required to file its results. Originations for the quarter totaled $445 million.

Prosper incurred $14 million in expenses just from restructuring related to their downsizing and layoffs which includes the closing of their Salt Lake City office and the termination of 167 employees. 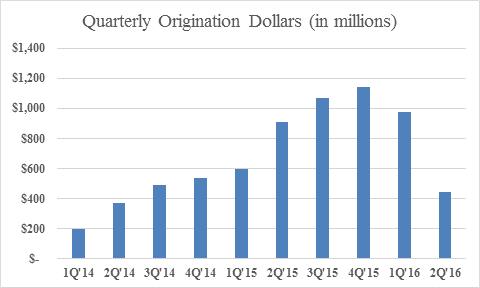 According to their 10Q, “Prosper Funding saw reduced listings on the marketplace as Prosper slowed down marketing efforts to reduce demand from Borrowers and maintain marketplace equilibrium. As a result, Prosper Funding experienced a decline in administration fee revenue-related party during this period and expects a decrease in administration fee revenue-related party in the third quarter of 2016 from the third quarter of 2015.”

Meanwhile, the performance of their actual loans has remained steady. View their latest performance update HERE.