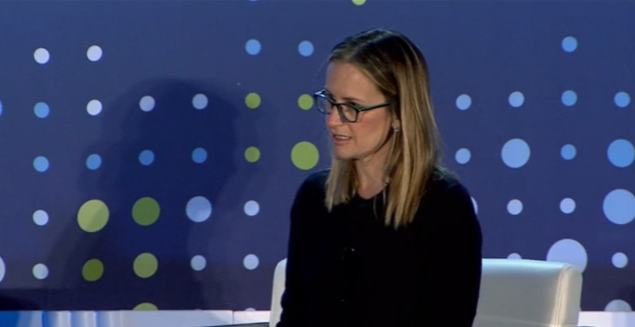 Reses said that it was not a customer issue, but an investor one. “This industry and this conference more than anyone understands the nuance between MCAs and loans,” she said. “From an investor side, that’s really where the savings are between the form of an MCA and the form of a loan, in that there’s an actual repayment date.”

Reading between the lines, she seemed to be saying that investors like certainty and exact terms whereas the traditional merchant cash advance product was harder to sell off or securitize because they lack a defined element of time.

Referring to the criticism that online lenders have been getting recently for their fast approvals, Chang specifically asked if companies like OnDeck were approving loans too quickly.

Reses responded, “I don’t think the ability to execute something quickly, smoothly, transparently, should be criminalized as something that requires oversight, and so I think being good at something should be well regarded.” She later added, “I think the notion that credit decisions being swift is a problem is just misguided.”

Reses used the word “transparency” several times but in explaining such did not reference the disclosure of Annual Percentage Rates even once. Instead she mentioned the importance of spelling out the total dollar cost to the merchants, subtly reconfirming the findings that are coming from many other alternative lenders.

Was the move from MCA just about investors though?