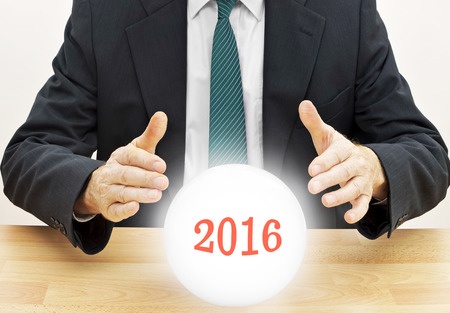 I hate new year’s resolutions, as most of the time the people making them on January 1st have already broken them by the time January 10th comes around. The reason they’re broken quick and easy is because they aren’t goals, but rather wishful thinking. A goal is something that should fit within the S.M.A.R.T criteria, which is a goal that fits five general metrics:

In other words, you don’t just randomly set goals, a goal has to first be done based upon critical thought, research, opportunity analysis and an examination of realistic outcomes, from there you set your objectives along with the step-by-step procedures to achieve them. Once this is done, you slap a deadline on each step-by-step procedure and continue to track your progression along the way.

I don’t set new year’s resolutions, I set new year goals and objectives. My goals and objectives for 2016 (in relation to our industry), will be based upon my predictions for the following 12 months. What do I see in my crystal ball for the year of 2016? This article will pinpoint my forecasts for our landscape this year. Some of you might agree and some of you might disagree, but nevertheless, these predictions ought to create a lot of quality discussion and debate.

“THE BIGGEST” WILL CONTINUE TO BE “THE BADDEST”

I’ve talked about the future of our industry before, with the belief that Strategic Networks will be the key going forward in terms of market dominance. These networks include the Center of Influence Network, the Mom and Pop Network and the Online Network. The Center of Influence Network includes other professionals such as banks, credit unions, merchant processors, etc., who have direct access to the prospective clients. The Mom and Pop Network is just a collection of random brokers from across the country that resell on a 100% commission basis. The Online Network is that of technology automation, especially the internet and how it will shape the market going forward in terms of communications, new lead generation, and more.

Well, the biggest funders on deBanked’s Official Business Financing Leaderboard will continue to dominate the industry in 2016, taking more market share and growing the market in general, based on their efficient utilization of Strategic Networks.

PRICING PRESSURE WILL INCREASE AND COMMISSIONS WILL DECREASE, ACROSS THE BOARD

For higher paper grade deals, I believe that the pressure on pricing for A+ Paper, A Paper and B Paper clients will continue to increase, which will cause many funders and lenders to just stop competing for them (due to no longer being able to compete), while others will find innovative ways to reduce their operational costs so they can reduce down their buy rates, passing the lower costs onto these clients to compete against alternatives from the traditional lending system or P2P lenders. This entire process might also cause the commissions for these higher paper grade deals to decrease as well.

C Paper, D Paper and E Paper commissions will go down as well, as most of the new funders and lenders will target these paper grades due to not being able to compete in the high paper grade markets. Due to the increased amount of players, this will put pressure on pricing which will have brokers slicing their commissions even for the lower credit graded merchants.

More private funders and lenders will offer syndication programs for their brokers, and do so in a much more efficient, streamlined and transparent way than most of the other syndication partners are doing currently. This will help reduce the risk for a lot of these private funders and lenders, which would assist in bringing down their pricing across the board, helping them stay competitive in a marketplace where new competitors will cause merchants to put more pressure on pricing.

You will see more funders and lenders start to restrict their working relationship with new brokers. Basically, instead of just signing up anybody with a pulse, I believe more funders and lenders will actually vet new brokers they are considering partnering with. This will come as a result of the funders getting fed up of dealing with unscrupulous acts, fraud and other actions from these new and/or rogue brokers, which does nothing but hurt their brand and online reputation.

FUNDERS AND LENDERS WILL FIGHT BACK AGAINST STACKING

More funders and lenders will fight back against stacking by doing as I suggested before, which is to add a page to their Funding Agreement that says if the merchant stacks, then the merchant is liable for additional fee such as $5,000 or $10,000 per stack. This is similar to how on the merchant services side, early termination fees (ETFs) are used so merchants stop switching their merchant accounts over every month to try and save “$5.” In addition, I believe more funders and lenders will just stop filing UCCs altogether unless they are filed only on merchants that breach their contracts. This means that those new funders who specialize in “stacking”, might have to come up with a new model, as these updated practices will make it so that they will have a difficult time finding new “clients” to market to.

THE MAJORITY OF NEW ENTRANTS WILL BE SLAUGHTERED

You will continue to see new brokers, funders and lenders enter the market, with many of the funders/lenders being nothing but brokers in secret who seek to backdoor deals. Nevertheless, most of these new entrants will be slaughtered in terms of burning through their savings and capital on outdated marketing strategies or trying to compete within Strategic Networks that are already dominated by the biggest funders/lenders/brokers in the marketplace. Most of these companies will be fly-by-night companies, exiting the market as fast as they came running in.

UCC RECORDS WILL STILL BE POUNDED

I believe the UCC as a marketing tool will continue to be utilized by most of the newer entrants, despite the fact that the UCC Boom is Over.

Back-dooring will decrease significantly as brokers smarten up by researching the partners they decide to work with beforehand, and not just sending over ISO Agreements to “anybody” that calls them up and says they might be able to do something for their deals that other funders can’t do. Also, brokers will stop functioning as a sub-broker as well, which makes no sense, and this will also assist with bringing down the back-dooring issue. The heart of the back-dooring issue is the broker’s laziness, it is their laziness in properly vetting the partners they choose to work with, as well as deciding to sub-broker on a deal instead of researching the players in the marketplace on their own so they have adequate platforms available for any type of merchant they receive.

INDUSTRY WIDE REGULATION WILL GET CLOSER

While we can pinpoint that this is already going on in California, I believe you will continue to see some type of industry wide regulation that will restrict access to new brokers and seek certain levels of ethics from current brokers. This might be from within the industry itself, or it might be forced upon us from some type of regulatory agency. I’m hoping we can do this ourselves and not bring in the Government.

MARKETPLACE LENDING AS A WHOLE WILL CONTINUE TO GROW

It’s been estimated that we will see over $100 billion globally in marketplace lending (consumer and commercial side) in 2016, and I agree with this metric. I believe our products will gain more mainstream attention and be accepted more as the “standard” rather than an “alternative”, based on the efficiency of how we deliver capital, versus the extensive and inefficient process of the traditional lending system.