Are You Weak, Or Are The Leads Weak? 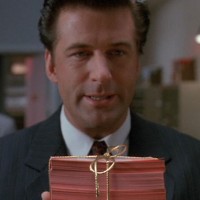 A LOOK BACK AT A CULT CLASSIC

The 1992 film, Glengarry Glen Ross, is a cult classic and one of my favorite movies of all time, with excellent writing, storyline and acting work done on behalf of the stars. In my opinion, the best part of the film was the beginning, when Blake (played by Alec Baldwin) was sent in from Mitch & Murray to fire up three of the office’s sales reps who were “low on the board” in terms of their sales performance. Blake’s “always be closing” speech has been glorified and imitated in sales offices across the United States since the movie’s release on Friday, October 2nd, 1992. I can hear the conversation between Blake and the late Jack Lemmon’s character, Shelley “The Machine” Levene, right now:

Blake: You laughing now? You got leads, Mitch & Murray paid good money, so get their names to sell them! You can’t close the leads you’re given?! If you can’t close sh*t, then you are sh*t! Hit the bricks pal and beat it because you are going OUT!

Blake was sent in to “fire up” The Machine as well as Dave Moss (played by Ed Harris) and George Aaronow (played by Alan Arkin), who were all struggling to meet sales numbers due to what they believed to be mainly their Office Manager’s fault (John Williamson who was played by Kevin Spacey) for supplying them bad, outdated and dead leads. The main character of the film was Ricky Roma (played by Al Pacino) and Roma wasn’t having the same struggles as his three counterparts, as he received the “premium leads” from Williamson for being number one on the board in terms of sales performance.

WAS ROMA’S SUCCESS MORE OF A RESULT OF HIS PERSONALITY OR THE GOOD LEADS?

Could Roma’s sales success have been based on the fact that he was just a “tad bit” more charismatic than The Machine, Moss and Aaronow? Or, could the bulk of Roma’s success be tied to the fact that he wasn’t sent out to sell to dead leads? Were the reps weak, or were the leads weak?

Moss believed it was all about the leads, even suggesting to Aaronow during the film that they start their own agency. Towards the end, Roma himself revealed that he believed it was all about the leads as well, as once someone broke into the office to steal the premium Glengarry leads out of Williamson’s office (which was later revealed to be The Machine and Moss), Roma was offered some of Williamson’s “dead leads” and Roma quickly rejected them, throwing them back into Williamson’s face and stating that he wasn’t going out until he got the Glengarry leads.

As mentioned, this movie is a cult classic, but often art imitates life as this movie displays one of the fundamental problems of the sales profession today as a whole, and it’s the fact that most Sales Managers are completely out of touch. As a result, for this article let’s take a deeper look into this topic to determine if you’re weak, or if the territory, market and leads you are being asked to “sell” or “sell into” are weak.

As globalization and technology automation in the 21st century surely replaces the jobs of many retail salespeople, customer service agents, and low level brokers, what I’m really hoping for is that someway and somehow, we can get rid of most Sales Managers. They are one of the biggest problems in the sales profession today because:

On top of all of this, most Sales Managers do not understand the B2B Sales cycle, as they “train” their reps as if they are selling a box of girl scout cookies or a new music album, focusing on over the top personalities, how cute someone is or their level of charisma. Instead, they should be focusing on providing knowledge, research, trends and other information to build a competent critically thinking professional, to implement market solutions that fulfill unmet market demand.

The majority of Sales Managers need to be done away with. These incompetent fools believe that it’s mainly the personality of the sales rep that makes them successful, thus, they will throw their reps out in a bad territory, a bad market, and calling on dead leads because in their mind a “good sales rep” has the “personality” to sell fire to Hell. As a result, their belief is that the quality of the market, the territory, the leads, nor the competitiveness of the products they sell don’t matter!

DO NOT WORK UNDER A SALES MANAGER

I usually recommend that B2B sales professionals work on an independent basis so that they don’t have to be subjected to an out of touch Sales Manager, which does nothing but stop your career progression and limit your earning potential. This is especially true when these out of touch Sales Managers provide you with their “leads”, as a vast majority of the time, their “leads” are inefficient.

Most of the time the leads aren’t leads, they are data records. You are going to have a much lower conversion rate on data records than you would leads, but the out of touch Sales Manager (who thinks he just gave you “leads”) will think that your conversion should be a lot higher and thus, he might “inform you” that you just aren’t cut out for this business.

Or, they might supply leads that are aged, sometimes from 90 days ago or more, thinking that the sales cycle is still active with these leads when the fact is that for the vast majority of them, the sales cycle was over months ago. Aged leads are usually leads where a merchant requested financing, but there’s usually one of three issues with these types of “leads”. Number one, the merchant either received the funding they wanted two months ago, or number two, they were declined by everybody and gave up on speaking with anybody else about the topic. Or number three, it could have been the case where the merchant wasn’t truly serious about getting funded anyway, deciding not to move forward with anybody. The few leads that you do convert, because your Sales Manager believes these were “hot leads”, he will end up scolding you over the low conversion numbers.

This is the biggest pet peeve right here, they might use the Glengarry Glen Ross model, which makes absolutely no sense. So here’s what they would do.

They would spend a lot of money on a marketing budget to produce a good stream of leads of merchants looking for financing assistance from an alternative basis. However, instead of dishing them out to their sales reps in equal number, they will give the majority of them to the reps “already high up on the board” and give hardly any of them to the reps at the lower end of the stick. All this does is causes the “rich to get richer” in that the reps getting the hot leads will just continue to stay up high on the board while those at the bottom can never move up.

What I don’t get is this, if you don’t believe in the reps at the bottom of the board, why not terminate them? Why the hell would you keep them on your staff, if you no longer believe in their abilities to perform and thus, aren’t going to provide them with the resources needed to move up on the board?

ARE THE LEADS WEAK, OR ARE YOU WEAK?

The truth is that in professional sales, it’s all about supply, demand, and solving complex problems with innovative solutions. It takes research, strategic planning and strategic market segmentation in terms of who we target, as the target of our prospecting has to be someone who is currently in a situation to utilize our services. This means that 90% of the job is that of finding the right territory, market and/or leads to sell to. Now, there are a lot of incompetent salespeople in the world, and you could equip them with the resources needed to succeed and they still fail to execute. That would indeed make those reps “weak” rather than the leads being weak. But in my opinion, far too often are competent salespeople at the mercy of a weak Sales Manager that provides them with weak training, weak products, weak markets, a weak territory, and weak leads. It’s based on this that my opinion stands, in that most of the time it’s the leads that are weak, rather than the competency of the sales professional.

Home › merchant cash advance, sales › Are You Weak, Or Are The Leads Weak?