Source Media’s Marketplace Lending and Investing conference kicked off today with a bang. During the opening keynote, two VPs at Goldman Sachs predicted that the industry would shift to retaining loans on balance sheets instead of continuing with the gain-on-sale model. The irony is that OnDeck appears to be going in the opposite direction since their recent path to profitability is being made possible by their new reliance on gain-on-sales.

The available solutions presented to small business financing problems at the conference covered the entire gamut. Pango Financial president Candice Caruso for example, explained that small businesses can get funding by rolling over money from a qualified retirement plan. Pango’s model capitalizes on The Employee Retirement Income Security Act of 1974 (ERISA), a 40-year old law that can be streamlined with the help of technology. ERISA established the regulation that allows for a private company to use retirement funds as business capital through an Employee Stock Ownership Plan (ESOP). 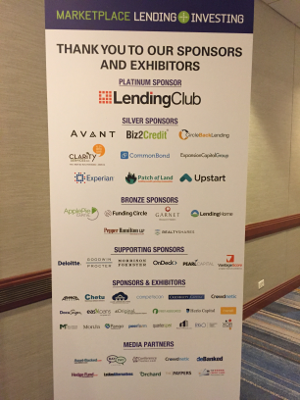 Companies like Pango have found a clever way to scale the benefits out of old policies and it’s opportunities like these that have everybody excited. QED Partners founder Frank Rotman summed it up best when he recited his own Wall Street Journal quote, “It feels like the Internet in 2000. Everyone is chasing it, but they aren’t sure what ‘it’ is.”

For marketplace lenders like QuarterSpot, they fit that bill well. Their CEO Adam Cohen was the Chief Software Developer for JetBlue Airways.

And among some of the other names in attendance, many are on the fast track for success. Expansion Capital Group for example just closed a $25 million credit facility with Northlight Financial and Bastion Management. And there’s also Pearl Capital who was recently acquired by Capital Z Partners. And Herio Capital, founded by one of OnDeck’s earliest employees, recently reached a new funding milestone.

At the end of the day, Anjan Mukherjee, the Counselor to the Secretary and Deputy Assistant Secretary for Financial Institutions of the U.S. Treasury Department told attendees not to bank on regulatory interest being forgotten about with a new presidential administration. Certain agendas can be “de-emphasized”, he said, but overall at least as far as the Treasury is concerned, enough important people will not transition away. They won’t forget everything, he explained.