A version of this article is from deBanked’s September/October magazine issue.

Almost 18 months ago at LendIt’s 2014 conference, Brendan Carroll, a partner and co-founder of Victory Park Capital said that in regards to business lending, “the government doesn’t have the same scrutiny on this sector as it does in the consumer space.”

This double standard is the crux of American capitalism. In business you can win or lose, be smart or foolish, risk it all or play it safe. Government regulations don’t let the average consumer be subjected to the same stakes. They are viewed to be at a natural disadvantage against businesses and thus there are laws to protect them, and perhaps rightly so.

Since entrepreneurship is a choice, businesses and the people that own businesses are held to a higher standard of acceptable risk taking. In the free market, the pursuit of profit holds the system together.

This economic worldview is part of the reason why entrepreneurial TV shows such as Shark Tank are so popular. In the Tank, contestants can just as easily walk away with a terrible deal as they can a good one. And when bad deals get made, and they do, I’ve yet to see regulators descend on the set to fine or arrest Daymond John, Kevin O’Leary, or Barbara Corcoran. 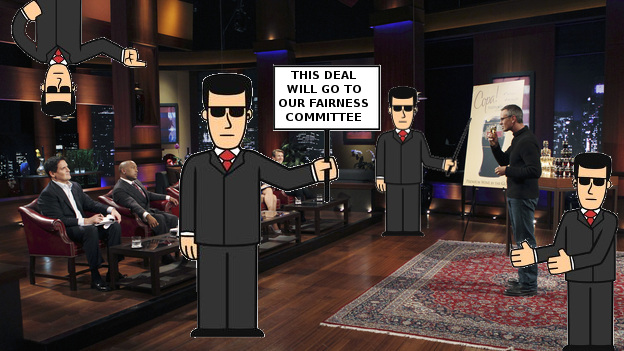 But Shark Tank features entrepreneurs on a remote stage detached from their daily environment, giving it the look and feel of a game show. If you want to see cold hard dealmaking with mom-and-pop shops on an up close and personal level, just watch CNBC’s The Profit. On the show, small business expert Marcus Lemonis does not sugarcoat what he is. “I’m not a bank. I’m not a consultant. And I’m not the fairy godmother,” he bluntly told one small business owner. It doesn’t matter if it’s a family owned store or a full fledged corporation, Lemonis is looking to make a deal and make some money. When it comes to business, he is well… all business.

Just as the CFPB hasn’t shut down Shark Tank, (which one has to wonder if they’ll be subject to Reg B of Dodd Frank’s Section 1071) none of Lemonis’ deals have been scrutinized by a Federal Reserve study, nor has the Treasury Department issued an RFI to better understand why entrepreneurs go on the show in the first place.

It’s no wonder then at LendIt 2014, Carroll also said that there wasn’t the same sort of moral hurdle when it came to institutional capital investing in business lenders as opposed to consumer lenders.

Moral was a telling word choice because the morality of certain commercial transactions have recently come under fire by groups claiming to represent small businesses. The premise of their argument is that commercial entities are no more sophisticated than consumers, that a corporation and the average joe are equal in their ability to take risks and make decisions for themselves.

Their evidence is that sometimes in business-to-business transactions, particularly in lending, one side accepts terms that would be considered far outside the norm for consumers, terms that violate a moral threshold. One has to wonder where a loan with an infinity percent interest rate ranks on this morality scale, a deal that’s actually been made and accepted several times on a TV show. Referred to as a “Kevin deal” since they are Kevin O’Leary’s favorite, the borrower is obligated to pay a perpetual royalty on top of repaying the loan itself. In simple terms, it’s a loan that can never be paid off. 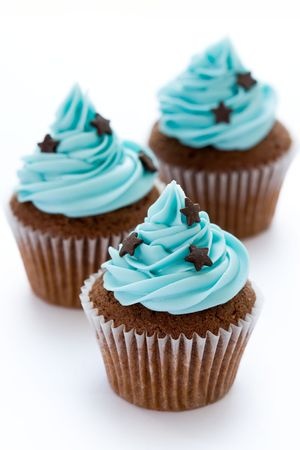 In the case of Wicked Good Cupcakes, a business that appeared on Shark Tank in 2012, a mother-daughter team struck a deal that would cost them 45 cents per cupcake in perpetuity to Kevin O’Leary. Many fans criticized them for it and yet the two have said that they have no regrets.

The fact that Wicked Good Cupcakes decided what made sense for them and was happy about it, damages the storyline that businesses need to be saved from their own decisions. But there’s another problem, government entities themselves may be inadvertently effectuating this false narrative by inferring incorrect conclusions from their own research.

Nowhere is this more evident than in a report recently published by the Federal Reserve Bank of Cleveland that analyzed small businesses and their understanding of “alternative lending.” The report shared the results of two focus groups that had been shown terms for three hypothetical products that supposedly represented actual products in the real world.

Unsurprisingly, the report concedes “when comparing the products, participants initially reported the three were easy to compare and that they had all the information to make a borrowing decision.” But the researchers pressed on until they got an answer that fit their expectations, that small businesses are confused when it comes to money and finance.

In a hypothetical scenario where a commercial entity sold $52,000 of future receivables for $40,000 today, it stated that the “lender” would withhold 10% of each debit/credit card transaction until satisfied. Participants were then asked to guess the interest rate on this loan if they paid it back in one year. That caused a lot of folks to scratch their heads and that’s because it was a trick question.

The question itself introduced conflicting facts and lacked crucial variables to make an intelligent guess. Nevermind that respondents prior to that question said that there was “nothing confusing” about the products presented as is. The original feedback should’ve been enough. Below are some of the responses offered before they were deliberately tricked.

The researchers concluded however that the answers to their trick question suggested there were “significant gaps in their understanding of the repayment repercussions of some online credit products and the true costs of borrowing.”

And while it might be true that they semi-admit to what they did when they wrote, “using only this information, calculating a true effective interest rate would not have been possible without making some assumptions,” the headline that spread thereafter was that small business owners are confused by alternative lenders.

But even if that was the case, at what point does confusion become unfair in a purely commercial transaction? And what would be an appropriate remedy?

We’ve been down this road before where federal regulators have set mandatory disclosures in order to bring transparency to a lending environment believed to be obscure. And just recently on September 17th, 2015, the House Committee on Small Business Subcommittee on Economic Growth, Tax and Capital Access pressed community bankers on the impact of such measures dictated by Dodd-Frank.

Congressman Trent Kelly asked if all the added new pages to loan agreements make it easier for their borrowers to understand. “Do they understand what they’re signing?” he asked.

B. Doyle Mitchell Jr., the CEO of Industrial Bank that was speaking on behalf of the Independent Community Bankers of America responded that they do not. “It is not any more clear,” he answered. “In fact it is even more cumbersome for them now.”

If anything, the Federal Reserve study offered compelling evidence that small businesses are happy with the way alternative lenders are currently disclosing their terms. It is only when government researchers tricked them that they became confused. That should say it all.

One consequence of entrepreneurship is that businesses are not created equal in their ability to assess financial transactions and no amount of disclosures or intervention can save them. There must be losers in order for there to be winners.

Case in point, there are lenders out there doing deals so lopsided that they actually turn to each other and say, “I can’t believe she took that.” Such is the case of RuffleButts, a children’s fashion line that appeared on Shark Tank in 2013.

“When they wake up, they’ll realize they messed up,” said Mark Cuban in reference to the deal Lori Greiner proposed and closed. An article on BusinessInsider.com covered the episode and unabashedly concluded, “Shark Tank isn’t a charity. The investors are putting in their own money, so they have every incentive to push to get the best deal possible for themselves.”

Shark Tank has risen in popularity because it is a reflection of a culture that believes dealmaking, both good and bad, is inherent to the endeavor of entrepreneurship. When a bad deal is made, regulators don’t come on the show to urge a do-over. 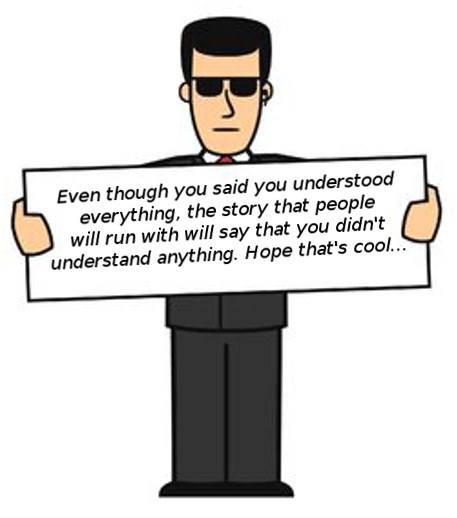 But what’s dealmaking got to do with the local pizza joint seeking $20,000 that doesn’t have the time to mess around on TV shows? Unlike lenders who refer to their transactions as loans or units, merchant cash advance companies and the agents who negotiate the transactions appropriately refer to their agreements as deals. How else would one label an agreement in which a commercial entity sells future receivables for a mutually agreed upon price?

And if the Federal Reserve study indicated anything, it’s that business owners feel there’s nothing confusing about these deals.

So it would seem that everything as Americans know it, watch it and understand it, is business as usual.

Even Brendan Ross, the president of Direct Lending Investments, was quoted by the BanklessTimes as saying, “I want to emphasize there’s absolutely nothing novel about lending money to businesses. This isn’t some phenomenon we are rediscovering. There isn’t going to be increased regulation because this isn’t new.”

Perhaps the only thing that could be considered new is that loan sizes have gotten smaller and the types of products small businesses can access has diversified. Along the way, some of these new startups have decided to offer products in line with a self-professed moral code, which is to deliberately lend money at a loss and lash out at lenders who seek profit.

There’s a term for lending startups that don’t make money. They’re called “failed startups.” By casting small businesses as being no different from unsophisticated consumers, it’s quite possible that shows like Shark Tank and The Profit would become illegal in the process. Disclosures meant to help make things more transparent could actually make things less clear and more cumbersome, just as they have in the past.

I don’t think anybody is in favor of small business failure or an environment where confusion prevails, including the guys making infinity percent interest loans like Kevin O’Leary. But if the goal is to increase transparency, it should be in a way that businesses on both sides are content with.

The Federal Reserve study showed the system is working well as is and that prescribing mandatory changes to fit some universal standard would only serve to usher in an era of confusion that everyone is trying to avoid. Lenders can always do better to serve their clients, but the free market must prevail. As Mitchell, Industrial Bank’s CEO said when he testified in front of the Small Business Committee, “the problem with Dodd-Frank is you cannot outlaw and you cannot regulate a corporation’s motivation to drive profit at all costs so while it has a lot of great intentions in over a thousand pages, it has not helped us serve our customers any better.”

A version of this article is from deBanked’s September/October magazine issue. To receive copies in print, SUBSCRIBE FREE
Last modified: August 13, 2018