More than 2,400 people packed into the LendIt conference last week in New York City and everywhere you turned, startups were boasting of their ability to lend billions of dollars to underserved consumers and businesses. Companies not even old enough to have attended last year’s LendIt conference had reportedly lent tens of millions or hundreds of millions of dollars already. Is it all an illusion?

Investors circled like hawks to try and grab an opportunity into this exploding market. Alternative lenders were practically being tackled by VCs, Private Equity firms, and specialty finance lenders:

Technological innovation is disrupting the status quo, attendees echoed. Surely banks can afford to develop new technology to compete, so why haven’t they? Lendio’s Brock Blake wasn’t afraid to challenge the Short Term Business Lending Panel on this. “Is there real innovation happening or is there regulatory arbitrage?” he asked. 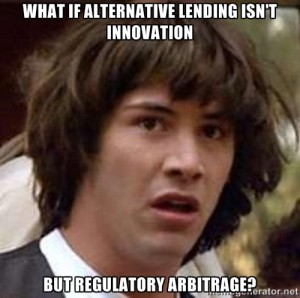 The panelists mostly agreed that it was a combination of both. Stephen Sheinbaum, founder of Merchant Cash and Capital (MCC) and BizFi, said “regulation is not something that scares us in any way.” That’s not surprising considering MCC has survived more than ten years in business and fellow panelist CAN Capital has survived more than seventeen.

But for the newer players entirely reliant on third party brokers or dependent on a Reg D exemption to issue securities, their success may indeed be regulatory arbitrage. And time is on their side.

Karen Mills, the former head of the Small Business Administration asked several regulatory bodies who would stand up to oversee small business lending. “No one stood up,” she said.

It’s the brokers that worry some folks most, an issue that PayPal and Square Capital do not have to contend with at all. OnDeck CEO Noah Breslow stated, “there is always going to be a set of customers that want to shop and want to have help.”

Kabbage’s Kathryn Petralia explained that only 2% of their business comes from brokers and their fees are capped at 4%. CAN Capital’s Jason Rockman argued that it’s about working with brokers that share their values. MCC’s Sheinbaum said, “you have to be willing to not do business with some of the unscrupulous players out there.”

But while these industry captains minimized the role that brokers play, 2015 is already being dubbed the Year of the Broker.

The regulatory environment isn’t the only issue to be worried about, skeptics argued. There was cautious alarm about the market’s viability when interest rates rise or the economy takes a turn for the worse.

“I think there’s going to be a shakeout,” said Steve Allocca of PayPal. MCC’s Sheinbaum explained that when he sees other funders doing deals that don’t appear to make sense, to not feel pressured to do them as well. “Stick to your disciplines. Stick to your guns,” he preached.

Fundation CEO Sam Graziano argued that small business lending is already very risky. The lifetime default rate on 7(a) SBA Loans is 20%, he said. Graziano, who hates the term alternative lending prefers to refer to the industry as digitally enabled lending.

And digitally enabling is something that OnDeck has focused on. In Breslow’s presentation, he said that applying offline for a loan takes 33 hours of work on average. Banks are shuttering branches at a record rate, he added.

Banks are dead, said many in attendance. Kathryn Petralia of Kabbage disagreed. “The death of banks has been greatly exaggerated,” she argued on a panel.

Indeed, Mills’ report shows that total outstanding debt on business loans by banks dwarfs the alternatives by more than 50 to 1. 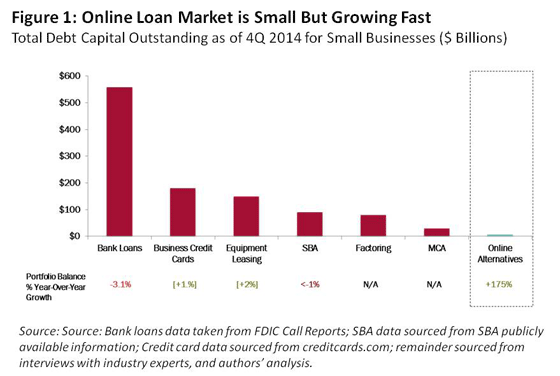 But former U.S. Treasury Secretary Larry Summers is convinced the tide is turning.”The conventional financial sector has, in important respects, let all of its main constituents down over the last generation, and technology-based businesses have the opportunity to transform finance over the next generation,” he said during the keynote speech.

With conference sessions looking and feeling like a cramped NYC subway during rush hour, the popularity of alternative lending is no illusion. 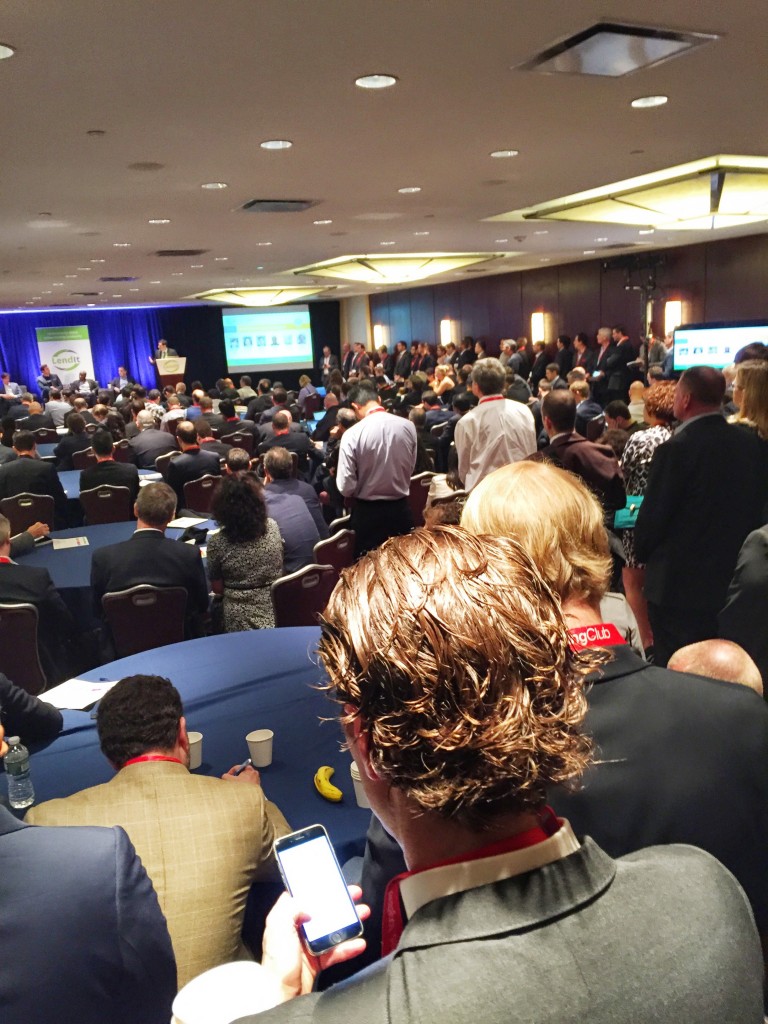 But healthy skepticism is at least creeping in while the industry marches forward. Changes in regulations, interest rates, and economic activity will separate those simply riding a wave from those that have created something real. Expect companies that exhibited at this year’s conference to be gone by 2016 or 2017, said several panelists.

The final count of LendIt attendees was 2,493 people. 150 people who tried to register at the last minute were turned away. More are expected to attend next year.