On June 27, 2014, the International Factoring Association (IFA) and the American Factoring Association (AMA) publicly announced their decision to ban merchant cash advance companies from obtaining memberships. The nature of just how public that announcement was is questionable since nobody in the industry seemed to be aware of it, including a dozen plus merchant cash advance companies who have been longtime members of the IFA. 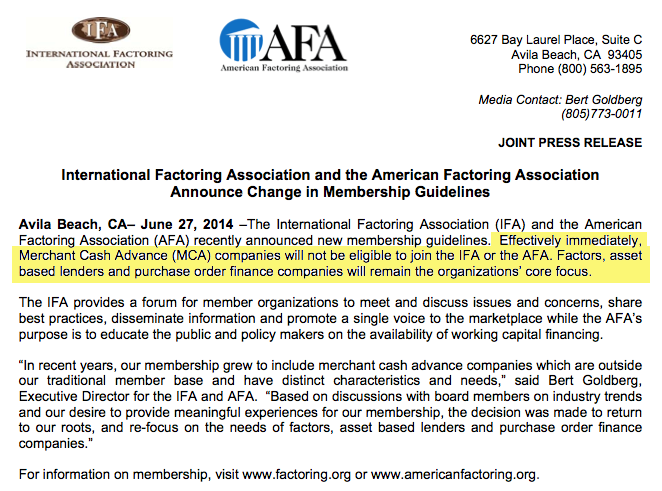 The timing of the ban is leaving a few companies unsettled since it was announced immediately following the IFA’s annual factoring conference in which merchant cash advance companies not only exhibited but were also amongst some of the event’s featured speakers.

To illustrate just how awkward the timing was, the IFA had just begun to thank everyone for attending the conference in the May/June issue of their magazine and in practically the same breath revealed that all merchant cash advance companies were banned going forward:

The IFA annual conference has grown to become the number one industry event for the factoring and receivable finance industry. The IFA convention is now the largest and most relevant event of the year, and as the attendees of San Francisco conference can attest to, it has become the must attend event of the year. Thank you to everyone that attended and helped the IFA achieve this unprecedented growth.
… … …
Due to the number of complaints that have been received, both the IFA and the AFA have voted to bar Merchant Cash Advance companies from membership in each organization. The boards of both associations felt that the model for this type of financing has changed and that there are a number of MCA companies that are not operating in an upfront manner. Given that the goal of both organizations is to assist the factoring community, we found it best to dissociate ourselves from this type of financing.

It is unclear if the IFA’s current merchant cash advance members were immediately terminated or if the rule only applies to new applications going forward. This is especially confusing since the feedback we’ve gotten from their members so far is that nobody knew this had even taken place. 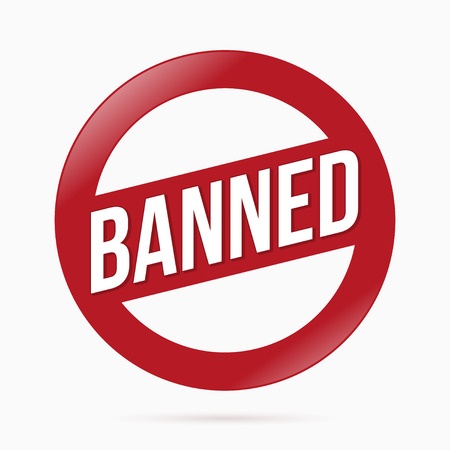 Hopes for a peaceful breakup between the two industries has possibly weakened after a story was spotted in the July/August issue of the IFA’s Commercial Factor magazine aimed at attacking and discrediting merchant cash advance companies.

The article by factoring attorney Steven N. Kurtz alleged that tortious interference, regulatory scrutiny, and rampant disorder were reasons to steer clear of merchant cash advance companies. A more detailed breakdown of his arguments can be found on dailyfunder, but it fails to mention the way he concludes the story:

At the moment, there seems to be too many new players in the merchant cash advance industry, with no experience and loose underwriting standards. There is likely going to be a shakeout because the industry segment has a high default rate and investors who lose money will lose their appetite for the deals. Before the market corrects itself, the factoring industry will have to ride out the storm by adjusting their business practices to effectively compete.

Did you catch his last sentence about riding out the storm? He’s saying to adjust, hold on, wait for a shakeout, and hopefully business for factoring companies will go back to normal. The reason it’s not normal now is because merchant cash advance companies are killing them competitively.

I guess if you can’t beat ’em, ban ’em? They should’ve just said that was the reason from the beginning…