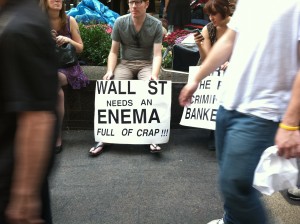 We didn’t protest… but we decided to see who was. Nowhere in the strange crowd did we find outraged business owners. Could the occupiers of Wall St. also be fighting against Main St.?

Wall St. bankers might have a lot of money, but small businesses employ the most jobs in America. Chances are if you are unemployed, unhappy, or overworked, it will ultimately be Main St. that will save you. But for time being, nobody is hiring. Business owners are pointing the fingers at banks, citing the lack of loans has stalled expansion. Excuses, excuses…

Wall St. might have perverted capitalism to enrich themselves, but Main St. has done just the opposite lately. When presented with an opportunity, thousands of businesses are unwilling to take the risk. “We’re just holding on for right now,” is a phrase we hear way too often from Mom and Pop shops.

We posed this question to an unnamed ‘Occupy Wall St.’ protester today:

PROTESTER: “Hell, I could turn it into $100. You can make money on a lot of stuff going on down here.”

Capitalism lives… It’s the drive and execution that enables someone with $1 to turn it into $2, $5, or $100 in a marketplace. It’s an intuition that Americans are born with, even those with anarchistic tendencies yelling in protest against it. 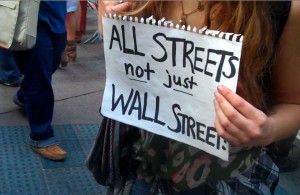 But something has happened to our beloved Main St.

Opportunities to grow are being passed up, and with that the ability to hire more workers. The rich get richer by investing their capital and taking risk.  In a competitive marketplace, we must always seek out ways to grow, expand, and improve. “Holding on” is not a strategy, at least not one that will lead to hiring. Stability does not prepare you for downturns, nor will it make you rich in the long term. Stability is actually the beginning of a long road that will one day lead you to being mad at those who got rich.

The math is simple. If you turn $1 into $1.10 everyday, while somebody else turns $1 into $2, expect yourself to be very poor by comparison 20 years from now. Whether you have a small retail store or a national franchise, don’t let your guard down, take chances, think big, and elbow your way to the top 1%. You’ll create a lot of jobs on the way.

Once you’re ready to turn $1 into $2, don’t worry about the lack of bank loans, Merchant Cash Advance providers will offer you $1 in return for $1.30. You net the profits and can redo it as often as you like. Naysayers will tell you it’s expensive and it would be if you didn’t invest the dollar. Rebuilding the economy begins with small business. Show them growth, show them jobs, show them how you were born to turn one dollar into two…

Some video clips we took while we were at the Wall St. protest: