Alchemy’s Lending Tech Has Come to the Small Business Lending Market: Here’s What You Need to Know

“We are the salesforce for embedded finance.”

Timothy Li, CEO of Alchemy, has launched a financing software for both commercial and small business lenders that can automatically approve applicants through an integrated decision engine. The service offers what he calls a “soup to nuts” digital lending platform — offering lines of credit, installment loans, and even loan servicing.

For the past six years, Li has been building a suite of products for those who want to sell financing. He compared his product to what many companies are now offering in the form of Buy Now Pay Later. As his service began to grow, Li realized there was an “extension” of potential with his service.

According to him, he created the service not as an idea of innovation, but to meet a growing demand from his users. “I heard from all of the small business lenders in the New York area,” said Li. “They said ‘Tim, could you augment or come up with a piece of software fully automated for us to use’”?

Although it took some time, Li said this recent announcement is what the lenders that came to him years ago were looking for. “I said well, we’re almost there, give me a year or two to kind of really properly do it right. So that’s what we’ve done.”

In what he refers to as “private labeled” software, Alchemy’s Lending SaaS (or Lending-as-a-Service) allows merchants and lenders alike to operate a fully branded and operational lending platform with a full suite of financial products. Customers range from tattoo removal companies to lenders, to companies that have now grown to become publicly traded.

The ability to literally send Alchemy a JPEG of some branding and marketing and becoming on online lender is as easy as just that. “Anybody can put their label on and have [their lending platform] up and going in a matter of weeks,” said Li.

THE GOOD ‘OL ISO MODEL IS GREAT. BUT…

When speaking about the role ISO’s play alongside his technology, Li didn’t dismiss the value brokers play in the small business lending industry. “The good ol’ ISO model is great,” he said. “It’s great that there is a product like this that can help [merchants] grow and drive their company. But as the new generation comes in, they don’t have time. They might be on their phone for five minutes after they close their store or small business, and these kind of products are out there sitting there for them to apply for on their own time.” 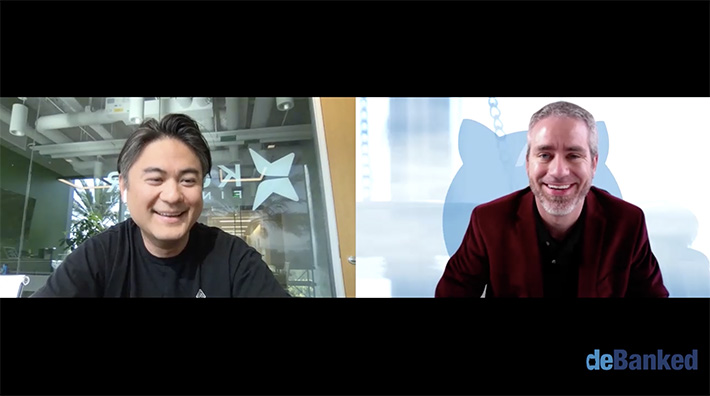 Li hinted that his product is best utilized by merchants who are digitally-native and are looking to have access to data quickly, while being given the time to make a decision regarding the type of financial product best suited to their business.

“[Alchemy] lets them pick what they want to pick based on their own cash flow,” he said. “It’s no longer that there will be a sales process where things aren’t as transparent. The ‘I am not going to tell you who my lender is until I’m paid,’ [thing], you know how the ISO world works. This stuff takes all of that away, and puts it right in the hands of the consumer that needs it.”

When asked if brokers could find any use of this product, Li said that if used right, the value proposition for brokers that use this software is huge.

“Brokers can use our system just like any other lender. If they want to have another way to be able to market to these small businesses, and have them use their products more. It’s essentially HubSpot for financing.”