Fintech Déjà Vu: Wait, Has This All Happened Before? 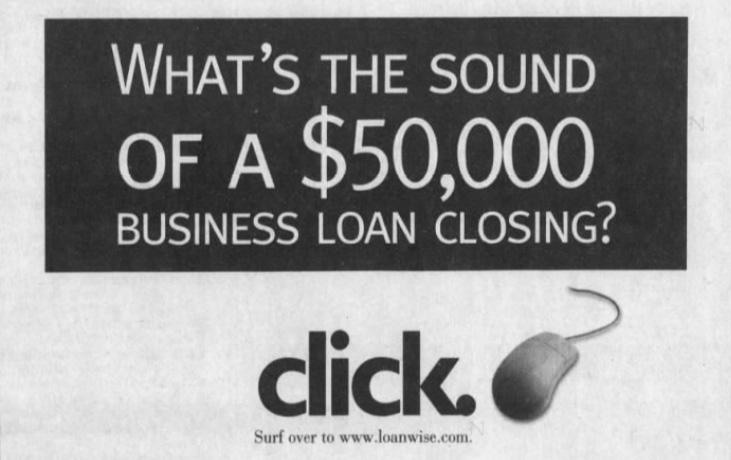 All one needs to do is answer a few short questions about their personal and business finances, have their answers evaluated by multiple leading lenders, and they’ll get a loan decision instantly, the advertisement said. Then, “select the loan that’s best for your business and get back to work all in less than 5 minutes.”

Touted as the “5-minute online business loan,” the ad for LoanWise ran in newspapers starting in 1999. That was 22 years ago. Back then, LoanWise was described as a marketplace that connected small businesses with lenders where borrowers could comparison shop for loans.

Provident Bank was the first to join the platform, where it would approve between $5,000 – $50,000 in as little as five minutes. At the time, the Los Angeles Times said that there were only 2,160 matches on Google for the phrase “small business finance.”

There’s over 6 million today by comparison.

LoanWise had set up 10 lenders on the platform by the end of 1999, with names that included American Express, Compass Bank, and PNC Bank. There was competition as well. Business Finance Mart and America’s Business Funding Directory also connected interested borrowers with lenders, according to the Times.

Today, all 3 websites no longer exist, forgotten vestiges from the land before fintech.

Or has this all happened before? 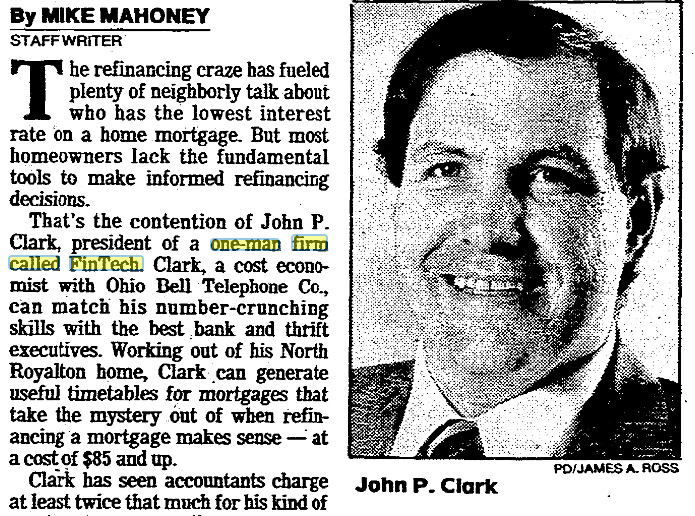 John P. Clark, a cost economist with Ohio Bell Telephone Co., ran a mortgage number crunching business in Cleveland on the side in 1986. Naming his company “FinTech,” Clark would help people calculate the best time to refinance.

“Clark can generate useful timetables for mortgages that take the mystery out of when refinancing a mortgage makes sense,” wrote The Plain Dealer. Had it been 2021, Clark sounds like it would have been a billion dollar fintech app.

It was not a one-off.

Fintech was the place to call if you wanted a working capital small business loan in San Antonio, TX starting in 1989. Ads for Small Business Financing advised people to call Fintech to get their business funded.

You could also just subscribe to the newletters. The Financial Times had four “FinTech Newsletters” in 1989 that were dedicated to covering electronic office, advanced manufacturing, telecom markets, and mobile communications. The price was £344 to £395 per year to receive them bi-weekly. 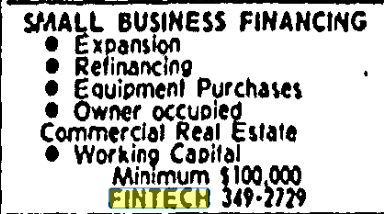 “FinTech newsletters tend not to be excessively technical,” The Guardian wrote on Aug 10, 1989, “but provide management guides to developments in each field, with lots of bullet points.” Perhaps the striking difference between that and today is that the newsletters arrived “hole-punched for filling in a binder.”

But hey, it’s all just a coincidence that ideas were roughly the same thirty years ago. Out in say, Des Moines, Iowa in the 1960s, for example, none of these things would’ve occurred to anyone.

Or would they have?

Sidney Feintech, a supermarket owner, expanded his store in 1963 to sell appliances, car batteries, clothing, and televisions. He got the idea that selling on credit would boost sales so he formed his own in-house credit company so that customers could Buy Now, Pay Later. Innocent enough, except the newspapers mispelled his last name.

“Fintech,” the papers said, had gotten into the credit business. 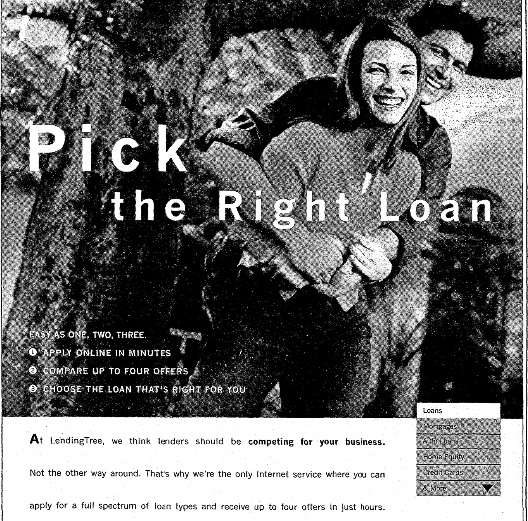 Fast forward 33 years to 1996 when a 26-year-old named Douglas Lebda thought the process of going from bank to bank to get a loan was too burdensome.

“I thought, ‘why can’t I put my information somewhere and let the banks compete for my business,” Lebda said. Launching a website, his company went on to generate $460 million worth of loans in just the fourth quarter of 1999 alone.

“There are other sites on the internet where you can apply for a loan, but those sites are operated by the lenders themselves,” Lebda said at the time. “We don’t lend money; that’s what makes us unique.”

That website was LendingTree, a company that today still has over 900 employees and a market cap of $1.8B. And Lebda is still the CEO.

In 1999, the hardest part was educating consumers to shop for loans online.

“Consumers have always done this one way, and this requires a behavioral change,” said consultant James Punishill in 1999. “In the old world, you’d pick up the newspaper and see a bunch of rates.”

“I knew from the start this would work because consumers really hate getting loans,” Lebda said at the time. “The market is huge and it’s perfect for e-commerce.”

Home › Fintech › Fintech Déjà Vu: Wait, Has This All Happened Before?