Methodical Ponders if The Roaring Twenties Are Around The Corner 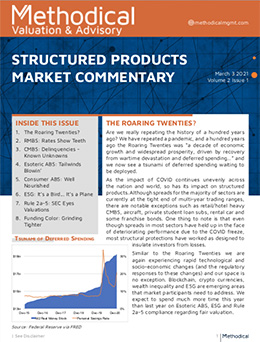 When we last spoke with Gunes Kulaligil, a co-founder of Methodical Management, a valuation and advisory firm, several securitizations in the non-bank finance space had just hit early amortization triggers. That was in late June 2020.

Now that time has passed and the world stabilized, a publication put out by the firm on March 3rd ponders if we are on the verge of repeating the Roaring Twenties of a century ago.

“We have repeated a pandemic, and a hundred years ago the Roaring Twenties was a decade of economic growth and widespread prosperity, driven by recovery from wartime devastation and deferred spending… and we now see a tsunami of deferred spending waiting to be deployed,” the company wrote.

Although spreads for the majority of sectors are currently at the tight end of multi-year trading ranges, there are notable exceptions such as retail/hotel heavy CMBS, aircraft, private student loan subs, rental car and some franchise bonds. One thing to note is that even though spreads in most sectors have held up in the face of deteriorating performance due to the COVID freeze, most structural protections have worked as designed to insulate investors from losses.

“A positive perhaps unexpected consequence of COVID has been the higher savings rates seen than before the pandemic,” the report says. “To be clear, it is a K-shaped recovery and there continues to be distress especially for lower income borrowers, but nowhere near the projected levels pontificated after April 2020’s unemployment number of 14.8% was released. There may continue to be unintended consequences down the road but for now FICOs are up, savings are up, delinquencies are down and this trend is likely to continue as new stimulus packages that are in the works get rolled out.”

You can view the full report here.