One chill result from the 2020 election was the legalization of recreational marijuana in New Jersey for adult use. In a 2-1 victory, Option One on New Jersey ballots passed, paving the way for a regulated environment for recreational use, possession, and cultivation in the Garden State.

Time to legalize it. pic.twitter.com/157WC7qgof

We did it, New Jersey!

Public Question #1 to legalize adult-use marijuana passed overwhelmingly tonight, a huge step forward for racial and social justice and our economy. Thank you to @NJCAN2020 and all the advocates for standing on the right side of history.

The amendment was billed as not only a chance to increase tax revenue but as civil rights reform. Advocates argued that prohibition laws disproportionately harmed minority communities.

The change was initially put before the legislature in 2017 but failed to pass by 2019. A bipartisan supermajority put the choice up to the public referendum. Appearing in Willingboro on Tuesday, long time advocate of legalization, Gov. Phil Murphy, spoke on voting day in last-minute support.

“I got to supporting it first and foremost due to social justice,” Murphy said. “We inherited when I became governor the largest white, nonwhite gap of persons incarcerated in America, and the biggest contributor to that was low-end drug offenses.”

New Jersey was one of four states with legalization on the ballot, and all succeeded, bringing adult use to Arizona, Montana, and South Dakota as well. After Tuesday, more than 111 million Americans- a third of the country live in a state where recreational marijuana is legal. 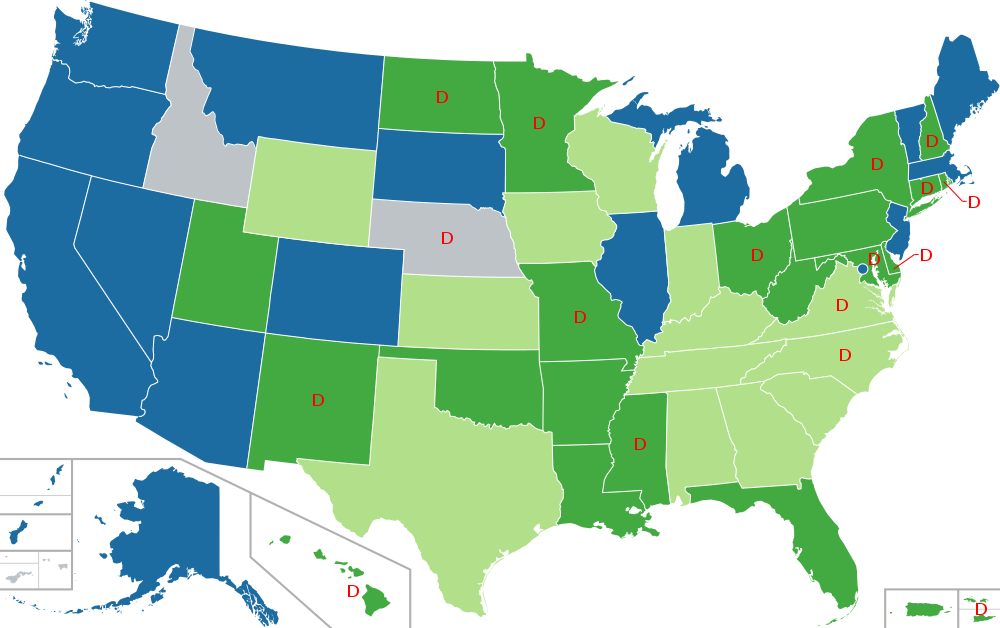 Dark Green = Legal for medical use

Grey = Prohibited for any use

Cannabis legalization advocates, like Doctors For Cannabis Regulation (DFCR), saw the day as a significant victory for industry and social progress. Dr. David Nathan founded DFCR in 2015, where he serves as president of the board. Dr. Nathan stood up and spoke out against the prohibition of marijuana 11 years ago and said he was one of the first accredited mainstream physicians to do so.

“I’m not a medical cannabis physician, I’m a psychiatrist who sees how much damage cannabis prohibition does compared to the drug itself,” Dr. Nathan said. “I’ve really been given the platform to speak up, but at the same time, it was hard to get colleagues to speak up on an issue.”

After working for NJ United for Marijuana Reform, Dr. Nathan founded DFCR to create an organization to facilitate physicians who wanted to get involved at a national level. The success of Tuesday’s vote demonstrates how far legal cannabis advocation has come, from a resounding no to a majority yes.

“A lot of doctors who understood cannabis prohibition as a tragedy and a mistake were concerned about what their peers would think about them if they spoke out,” Dr. Nathan said. “Now we’ve got a group of highly respected physicians organized and advocating strongly, not just for legalization but much more importantly for effective regulation.”

Dr. Nathan sees the NJ amendment as a significant chance for improvement in public health. Despite legalization, it is unclear how the new law will go into effect. Per the amendment, the state will create a regulatory framework and tax the sale of marijuana at 6.625%, but implementation is up for debate.

Legislators still have to agree on how a new Cannabis Regulatory Commission will function. The state will also have to choose how decriminalization, possession limits, growing limits work, and forgiveness of past marijuana crimes.

All of which will be figured out and are necessary to the fair implementation of the passage of the amendment, Dr. Nathan said.

But those changes may come fast. NJ, like many states, is hurting during the COVID recession. Last month New Jersey officials approved a budget that is set to borrow $4.5 billion from the Federal Reserve to plug pandemic-sized holes in state spending.

Basing estimates on Colorado’s experience after legalizing cannabis in 2014, the state legislature predicts NJ could see tax revenues of up to $126 million a year from recreational sales.

With such high revenues, some suspect New Jersey to lead the way for other northeastern states; income will spur jealous neighboring Pennsylvania and New York to legalization in competition.

“If this gives both Pennsylvania and New York a push, that would be great,” Dr. Nathan said. “I do think it’s going to have an impact, now that there will be a state right in the middle of the Mid Atlantic that is going to have regulated sales.”

But even with tristate legalization, the cannabis industry faces a problem with funding.

Most firms in cannabis supply chains- from growers to dispensaries- are small businesses that suffer from a lack of access to bank funding. Because marijuana is an illegal Section 1 drug like Heroin on a federal level, banks and venture capitalists have their hands tied when it comes to credit. But with Tuesday’s victories for legalization, federal regulation is closure to changing.

“I think that each state that adopts, sends a stronger message to the federal government,” Dr. Nathan said. “The voters in those states are giving resounding victories to the notion that cannabis should be de-scheduled not rescheduled, and then regulated.”

deBanked has been following the SAFE Banking Act since it passed in the House last year, a piece of legislation that hopes to address cannabis banking problems by allowing legal pot firms to open banking deposit accounts.

The law was bundled into the HEROES act with the rest of business aid projects, stuck between the GOP-controlled Senate and the blue House since the summer. Depending on the Senate’s layout when ballots are fully counted, financial institutions that have left pot companies de-banked may be-danked.