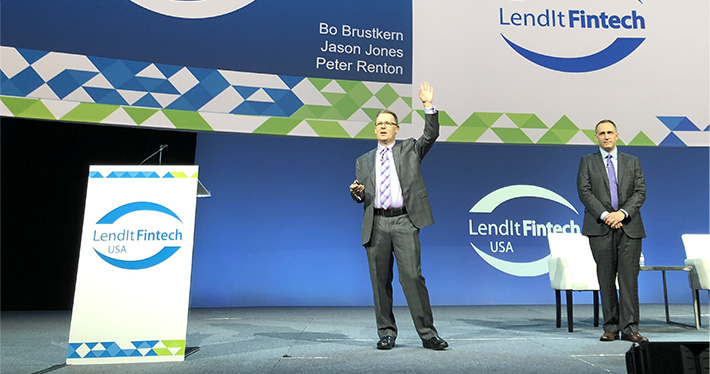 The LendIt Fintech digital conference last week was a sign of the times. This year, millions of average businesses and consumers have had to go virtual: they had no choice. 2020 has been a year of struggle and survival, and a time of great fintech adoption.

Some firms have been more successful than others. Going full digital, LendIt introduced virtual networking at the conference- the first day alone saw 2,171 meetings. Zoom meetings and virtual greetings took the place of handshakes and elevator pitches that would regularly accompany the convention.

On day three, LendIt hosted a panel of SMB lending leaders from Stripe, Shopify, Square, and Quickbooks Capital. Bryan Lee, Senior Director of Financial Services for Salesforce, served as moderator and he focused the discussion on “How the leading fintech brands are adapting.”


Lee began the talk by asking Eddie Serrill, Business Lead from Stripe Capital, about how the industry has pivoted.

Serrill talked about how Stripe was powering online interactions and saw an influx of traditionally offline businesses switching over to their platforms. Stripe also saw an increased demand for online purchases and payment.

“We’ve been trying to find that right balance between supporting users that have been doing incredibly well,” Serrill said. “While trying to support our users who are seeing a bit of a setback.”

Stripe introduced a lending product in September of last year and now SMBs can borrow from Stripe and pay back by diverting a percentage of their sales, much like the other panelists’ companies offer.

Jessica Jiang, Head of Capital Markets at Square Capital, talked about how her firm adjusted. Square reacted to fill the niche of their underserved customers by introducing a main street lending fund, serving industries hard hit by the pandemic, Jiang said. Small buinesess that relied on in-person action like coffee shops and retail community businesses were given preferential lending options.

Product Lead at Shopify, Richard Shaw, said that this year his firm learned to be prepared for anything. Everything that Shopify was potentially going to do or planning on implementing in the coming years suddenly became a here-and-now necessity.

Shopify, the Canadian e-commerce giant has doubled in value this year. The firm launched Shopify Capital in the US and Canada in 2016 and has originated $1.2 billion in funding to small businesses since that time.

Luke Voiles, the VP of Intuits QuickBooks Capital, talked about how his team handled pandemic conservatively.

“Five years of digital shift has happened instantaneously due to COVID,” Voiles said. “Intuit is pretty recession-resistant in the sense that you have to do taxes, you have to do your accounting, and the shift to digital helps a lot.”

Business lending was different, Voiles said, as soon as his team saw COVID coming, they battened down the hatches, slowed lending, and pivoted to facilitating PPP.

Voiles said the craziest thing he has seen in his career was what Quickbooks did to deploy PPP aid.

Within about two weeks, almost 500 people from across Intuit came together to shift all the data they carried on customers to aid applications.

“We were uniquely positioned to help solve and deploy that capital,” Voiles said. “We have a payroll business where 1.4 billion business use us, we have a tax business where we have Schedule C tax filings, and we have a lending business. We were able to pivot and put the pieces together quickly.”

QuickBooks Capital deployed $1.2 billion to 31,000 business in a process that Voiles said was 90% automated. Now customers are awaiting other rounds of government aid.

Square’s Jiang said the initial shutdown weeks in March and April saw hundreds of Square team members working on PPP facilitation through the night and weekends. As the funds dried up those first two weeks, it was clear to Jiang the program was favoring larger firms and higher loan amounts, leaving out small businesses.

“That’s typical of investment bankers, but not very typical of tech,” Jiang said. “PPP is a perfect example of how small businesses are continuing to be underserved by banks.”

THE SHAKEOUT AND THE FUTURE

2020 has been a major shock to the lending marketplace. Voiles from Quickbooks said the amount of work it took to make it through the first wave was a significant shakeout.

“You’ve seen what’s happening with Kabbage and OnDeck and other transactions with people getting sold; there is a shakeout happening in the space,” Voiles said. “The bigger players will make it through and will continue to help small businesses get access to capital that they need.”

When asked about the future roadmap of QuickBooks Capital, Voiles said it wasn’t just about automating banking. Using Intuit’s resources to build an automated system is only half of the picture- the firm believes in an expert-driven platform. After the automated process, customers will be able to talk to an expert to review the data, and “check their work.” Voiles said Quickbooks wants to offer a service that is equivalent to the replacement of a CFO.

“These small businesses that have less than ten employees, they can’t afford to hire a pro,” Voiles said. “They need automated support to show them the dashboard and picture of what their business is.”

Pointing to Stripe’s online infrastructure, Serrill exemplified what successful lenders will offer next year: a platform that combines many needs of SMBs in one place.

“I think it’s really about linking all of this data, making it super intuitive and anticipating the need for their users, so they don’t need a team of business school grads to manage their finances,” Serrill said. “So they can get back to building the core of their business, not figuring out whether they have enough cash flow tomorrow.”

Jiang said the future of small business would be written in data, contactless payments, and digital banking. She sees consolidation in the Fintech space and has a positive outlook on bank-fintech partnerships.

The FDIC granted Square a conditional approval for the issuance of an Industrial Loan Company ILC in March this year. Jiang outlined plans on launching an online SMB lending and banking service next year called Square Financial Services if the conditional charter remains in place.

For Shopify’s future, Shaw was excited to look forward to the launching of Shopify balance- a cash flow management system, and Shopify installment payments. He reiterated that the success of Shopify’s lending division was due in part because making loans was not the entire business.

“Shopify Capital is one piece of a wider ecosystem,” Shaw said. “All these things together are more powerful than individual parts.”