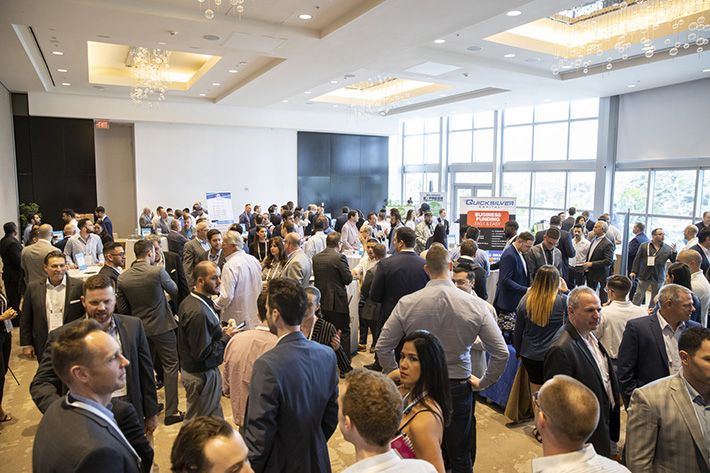 Conference season will soon kick off, but many attendees are at a loss at how to score big at these events. Without a doubt, trade shows and conferences offer participants a prime opportunity to boost brand exposure, make professional connections and increase sales.


But there’s also a lot of behind-the-scenes work required to turn these events into successful business endeavors. While the playbook won’t be the same for every company, here are some tried-and-true tips to help attendees get the most out of conferences.

Start by determining which conferences to attend. With dozens to choose from, it’s not realistic from a budget, time or value perspective to hit every conference, says Jim Larkin, who manages events for OnDeck. Companies should select conferences based on which ones make the most sense for their goals and objectives. Not all conferences will offer the same benefits to every company or industry professional, frequent conference attendees say.

Ideally, management teams should meet early in the year to weigh the pros and cons of each conference, against the backdrop of the company’s budget. Some factors to consider include where and when the conference is being held, which of your competitors, prospects and customers are likely to attend and how many employees it makes sense to send, if any. “Budgets drive everything and you want to be smart with spending money,” says Janene Machado, Director of Events for deBanked, whose flagship conference, Broker Fair, is scheduled for May 6 in New York. “You need to be strategic about why you are attending a particular conference,” she says.

It’s essential to plan ahead for each conference to make the most out of the event. This includes carefully combing through the agenda, scheduling meetings ahead of time and getting acquainted with the physical layout of the event space. If more than one company representative is attending, it’s also important to coordinate their activities in advance to avoid duplicating efforts and to maximize productivity.

“You have to make your own luck at these conferences,” Larkin says.

Most events have an online or mobile agenda and networking portal that are open to participants at least a few weeks beforehand. Bookmark the sessions you would like to attend, build your wish-list of people you would like to meet and start requesting meetings as soon as possible, says Peter Renton, co- founder and co-chairman of LendIt Fintech, which has an upcoming conference scheduled for April 8 and 9 in San Francisco. “Last year we helped to enable nearly 2,100 meetings at our USA event, and most of those meetings were organized through our networking portal,” Renton says.

Don’t delay when it comes to setting up advance appointments because schedules can fill up quickly, says Monique Ruff-Bell, event director for Money20/20 USA, which will take place in Las Vegas from Oct. 27 through Oct. 30. “Identifying the right contacts beforehand, reaching out and establishing what you’d like to achieve in a short meeting will make your time much more productive,” she says.

It’s fine for attendees to leave some time in their schedule for impromptu meetings as well; just be sure to fill those slots, says Ken Peng, head of business development and marketing at Elevate Funding. “No one should ever be asking, ‘what are we doing next?’ You should know,” he says.

It’s also a good idea to plan ahead for a dedicated meeting space so you’ll have a convenient, comfortable and quiet space to conduct meetings, seasoned conference attendees say. This can be especially important at big conferences where thousands congregate. For those who don’t want, or can’t afford, to pay for a meeting room, it’s a good idea to find a quiet restaurant or coffee shop outside the busy convention center area where you can have quiet, uninterrupted, productive conversations in a relaxed environment, says Larkin of OnDeck. Don’t choose the heavily frequented coffee shop next to the hotel where meetings are sure to be disrupted by heavy foot traffic, he says. “Get away from the noise, the hustle, the chaos. Quiet is king.”

Conferences can be expensive, so it’s important to make the right decisions with the available budget. For instance, companies don’t have to miss out on promotional opportunities just because the highest level of sponsorship is out of reach for their budget. Instead, look for creative ways to make an impact without breaking the bank, says Stephanie Schlesinger, director of marketing for LEND360.

Schlesinger suggests that would-be sponsors have an open conversation with conference organizers about what they can afford to spend and what they hope to reap in return for their marketing dollars. She offers the examples of companies that have sponsored popcorn breaks, pens and pads of paper, badges, lanyards and other marketing materials. “There could be opportunities to do something very unique. By brainstorming together we can think of outside-the-box opportunities to really make an impact for your brand,” she says.

Another cost consideration is where to stay. Though it can be tempting to save a few bucks by bunking off-site, that’s not always the most prudent decision, frequent conference attendees say.

“Time is really valuable at these shows and events. If you’re staying off-site you have to battle everybody for the cab line, and the increased expense of commuting can offset any cost savings,” says Sheri Chin, chief marketing officer at BFS Capital. Also, staying on-site “gives you more flexibility when unscheduled things come up,” she says.

If staying on premises isn’t an option, conference attendees should make extra efforts to spend considerable time in the bar or lobby of the conference site, says Jeffrey Bumbales, marketing director at Credibly. People will come in and go and it’s an easy way to start conversations, he says. 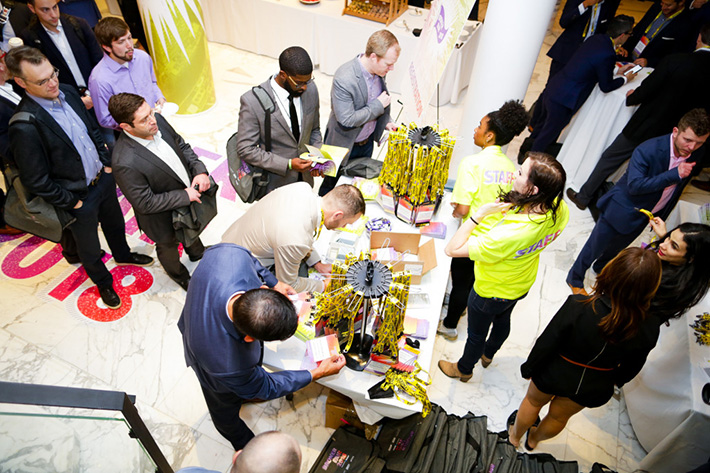 Conferences typically consume a lot of energy, so Eden Amirav, chief executive and co-founder of Lending Express, recommends participants try to catch people well before they are running on empty. As the conference goes on, it becomes harder to engage people because they also get drained, he says. Typically conference doors open a few hours before the first sessions begin, and this can be an especially effective time to network, Amirav says.

Arriving early also allows participants to find their way around. Ruff-Bell of Money20/20 USA recommends participants walk through the entire event space upon arrival to get their bearings. “Many of these large conferences can be overwhelming, and knowing where to go will help with your time management,” she says.

Bumbales of Credibly also recommends conference attendees pack their schedule tightly—even though it might mean activities extend late into the evening. Instead of calling it quits at 6 p.m. he recommends conference attendees plow through and host evening meetings over dinner or drinks. Even though a participant may be tired, it’s best not to miss these important networking opportunities, he says.

The proper conference mindset includes knowing there’s a good chance sleep won’t be plentiful. To accommodate, Bumbales tries to ensure he’s well-rested before a conference. He also makes sure to pack protein bars and non-perishable snacks for replacement meals as needed throughout the conference in case he needs to eat on the go. The goal is to hit the ground running and be able to focus entirely on conference-related business, he says.

Although numerous social opportunities abound at conferences, not everyone takes advantage. Certainly not everyone is as comfortable approaching strangers. But it’s important for conference- goers to try to break out of their shell whenever possible, industry professionals say. When he first started going to conferences, Gary Lockwood, vice president of business development at 6th Avenue Capital, says he found it difficult to strike up conversations with strangers because it took him out of his “comfort zone.” But he forced himself to make the extra effort, and it has served him well. He says that some of the best connections he’s made have come from these chance meetings at breakfast, lunch or during random breaks. 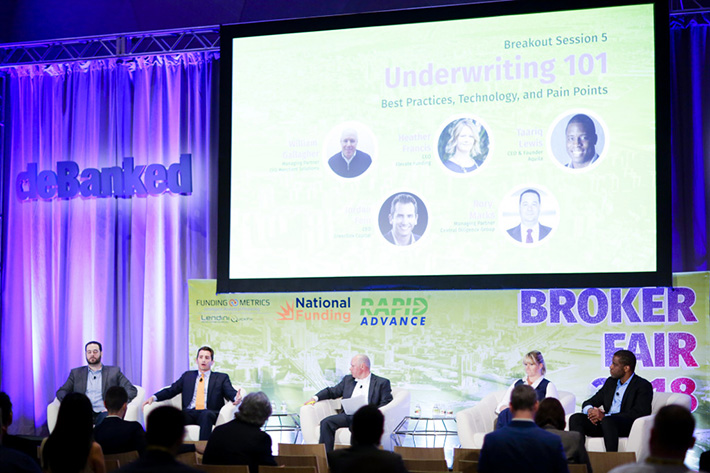 Although attendees don’t always stay on-site for meals, Peng of Elevate Funding recommends people stick around during these times, if possible. He finds these meals a good opportunity to chat with others in a comfortable setting as opposed to the more strained conversations that can happen when someone approaches him at an exhibitor booth. These informal conversations offer a better chance to build a rapport with someone and learn—in a non- pressured environment—about what the other person does, he says.

Bumbales of Credibly says elevator time offers another opportunity for chance meetings that can turn into business opportunities. Most times, he prefers to take the stairs, but not at conferences. Elevators can be great for short, yet productive conversations. He likes to position himself next to the elevator buttons, which gives him an opening to break the ice. He says he’s had a few business opportunities arise as a result of elevator conversations. 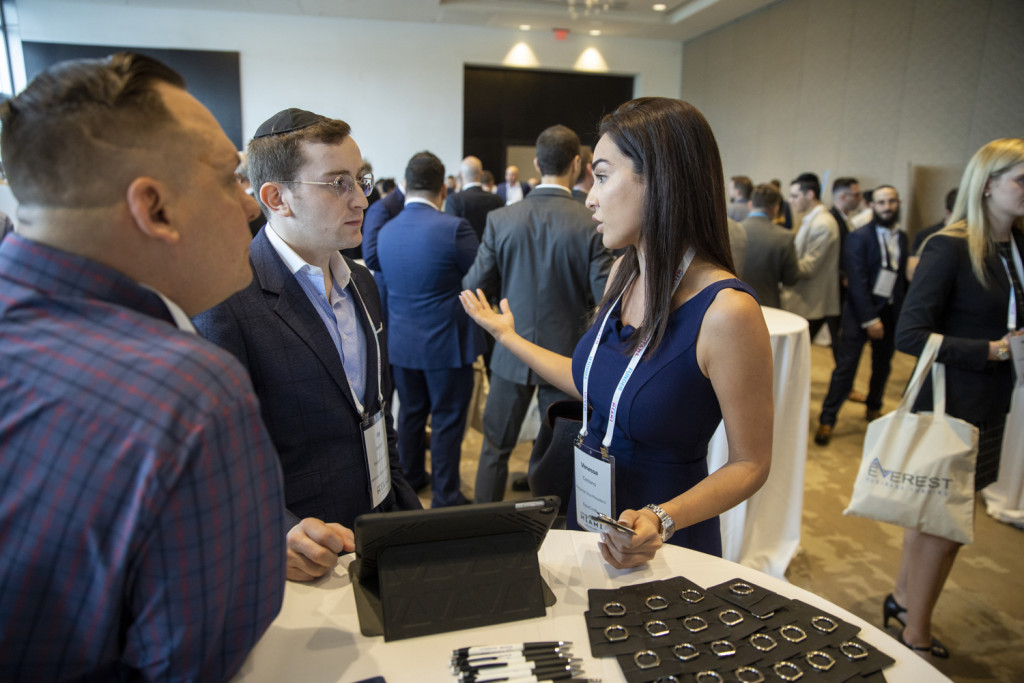 It’s also important not to monopolize anyone’s time says Machado of deBanked. Everyone is there to meet as many people as possible, so she recommends keeping conversations quick, meaningful and relevant.

When he’s talking to someone for the first time, Lockwood of 6th Avenue Capital tries to listen more than he speaks. “I want to listen a little more than I talk in the beginning so I can tailor the conversation to what they need.”

While not every exchange will be fruitful, it’s important to recognize that any conversation could lead to future business; even a commercial real estate broker who has no present connection to merchant cash advance can be a potential partner or resource at some point, Lockwood says.

It’s also a good idea to keep your business cards handy at all times. Bumbales says he’s been in several situations when people don’t have them available, which makes exchanging information more awkward. “It’s a lot less awkward to exchange business cards then it is to ask for someone’s cell phone number,” Bumbales says.

Because each day is so jammed- packed with information, it’s a good idea to take notes so you don’t lose track of important details, says Ruff-Bell of Money20/20 USA. Each person will have his own system, but effective note-taking becomes important for recapping the event back in the office and for sending post-event follow-ups to new contacts. “At the end of each day, go through your notes and clean them up, ensuring you’ll understand the key points and important details weeks later,” she says.

Some conference participants fall short when it comes to following up with new connections they’ve made, but this can be a grave mistake. Follow-up emails are most effective when they are personal, says Peng of Elevate Funding. He recommends attendees jot down a few notes on the business card of each person they meet to jog their memory later on about their conversation. Then, weave details of the conversation into the follow-up email, so the correspondence won’t seem cold, generic or canned, he says.

Remember, conference-goers will be meeting hundreds of other people at the conference, Ruff- Bell says. “Ensure your follow-up is prompt, effective, and most importantly, memorable,” she says

MAINTAIN PROFESSIONALISM AT ALL TIMES

Even though the setting is social, conference attendees need to be mindful about maintaining proper decorum at all times. This is a seemingly obvious rule of thumb that people sometimes forget, conference participants say.

Professionalism also dictates that attendees and exhibitors should be where they are supposed to be at appropriate times. Peng recalls a conference he attended last year where one of the exhibitors left its booth unmanned for most of the conference. There’s no way to know where an interaction at these booths can lead in terms of new business or face-time with existing clients.

“It’s not doing the company any favors” by passing up the opportunity, he says.