Here’s something you don’t see every day. A paper published by the Federal Reserve Bank of Cleveland about peer-to-peer lending was so dubious, that it has been taken down.

Since working paper no. 17-18 and related commentary on peer-to-peer lending were posted on our website on November 9, the authors have received several questions about the composition of the underlying data set they used in their analysis. In light of the comments received, the authors are currently revising their paper to further clarify the data sample they used in the study. Their revised paper will be posted as soon as it is completed. 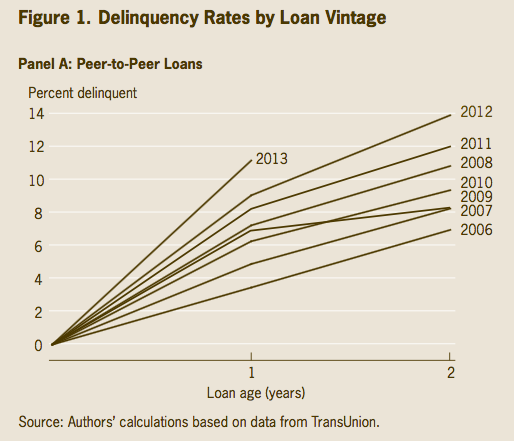 P2P Lending evangelist Peter Renton, a LendIt co-founder, was one of the first to challenge it. One issue was a chart purporting to plot delinquency rates in p2p lending going back to 2006.

“This chart shows that the lowest delinquencies from P2P loans occurred in 2006. Really?” Renton wrote on his blog. “I am sorry but this is just plain wrong and I challenge the authors to show me the actual data this is based upon. In 2006, the only consumer P2P lending (or any significant online lending) platform in existence in this country was Prosper and their 2006 vintage was terrible.”

Nat Hoopes, executive director of the Marketplace Lending Association (MLA), was even more vocal. In an op-ed he wrote for American Banker, Hoopes says, “In our view, this paper — ‘The Taste of Peer-to-Peer Loans’ — and its accompanying materials show that a lack of precision and understanding of subject matter can result in significant inaccuracies. The report’s authors presented findings that seemed to reflect issues with the P-to-P industry, but they actually relied on data from a much broader category of loans. The result was a misleading and brutally critical report about the P-to-P industry that was actually based in part on data from more traditional loans.”

Online lenders had reason to fret over the report as the Cleveland Fed did more than just publish charts. “P2P loans resemble predatory loans in terms of the segment of the consumer market they serve and their impact on consumers’ finances,” the Fed concluded. “Given that P2P lenders are not regulated or supervised for antipredatory laws, lawmakers and regulators may need to revisit their position on online-lending marketplaces.”

The worst offense, according to MLA’s Hoopes, was that the data the Cleveland Fed relied on was not even p2p lending data. A senior VP at Transunion had reportedly admitted that the data used comprised of both traditional loans and online loans that had been requested by the Fed a long time ago to use for a different study.