“Since the inception of MPL ABS market, we have observed 10% of deals breaching triggers historically,” the report says. It goes on to say that these events are typically manifestations of “unexpected credit performance, poor credit modeling, or unguarded structuring practice.”

CAN Capital is the lone small business lender on the above list and we reported on their trigger breach back in December. Little public information has come out about the company since they stopped lending late last year. 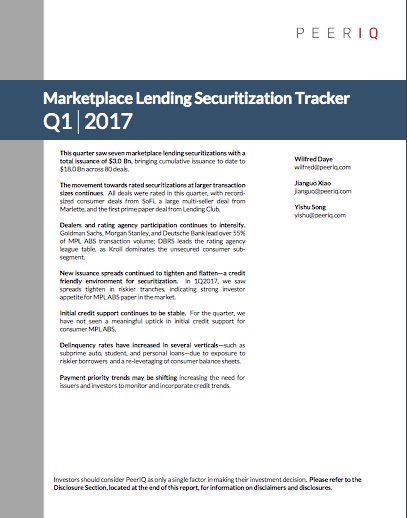 The most recent trigger breach on the list was SoFi, a company known for courting super prime borrowers.

“Trigger breaching events do not necessarily imply credit deterioration of the collateral pool,” the PeerIQ report states. In another section of the report that addresses increased losses for non-bank lenders, it says that two of the three primary drivers of that are borrowers stacking loans and lenders shifting to riskier borrowers.

Nonetheless, Q1 was a record quarter for marketplace lending securitizations with seven deals priced for $3 billion. That’s a 100% increase over Q12016. “The industry continues to experience strong investor sentiment as evidenced by growing deal size and improved deal execution,” they say.