The nation’s small businesses are cautiously optimistic about the economy and the National Federation of Independent Business’s Index of Business Optimism testified showing a marginal rise in May.

While merchants are still nervous about sales and remain hesitant to make big capital expenditures or stock inventory, they are still looking to expand, hire more and generally expect the economy to improve. 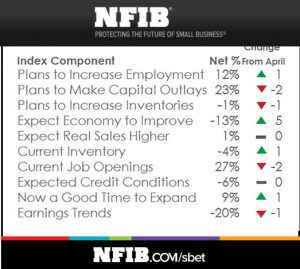 But much to lenders’ displeasure, 31 percent reported that their credit needs were met and 52 percent said they didn’t plan on getting a loan as businesses controlled spending on capital goods. The percent of owners planning to spend on capital fell 2 points to 23 percent and the average rate paid on short term maturity loans fell by 40 basis points to 5.3 percent.

The index survey that 700 business owners participated in, rose a negligible 0.2 points to the previous reading of 93.8 last month.

While 56 percent of the respondents said they were planning to ramp up hiring, 48 percent reported a talent crunch for the positions they were trying to fill. Thirteen percent of owners cited the difficulty of finding qualified workers as their most important business problem.

Weak sales were also among the top concerns for small businesses in the country for 14 percent of the respondents, which hurt inventory and capital expenditure. The number of owners wanting to stock up on inventory was low. “These weak inventory investment readings are consistent with the rather poor performance of consumer spending in the first quarter, leaving owners with excessive stocks and no incentive to add to them,” the report said.